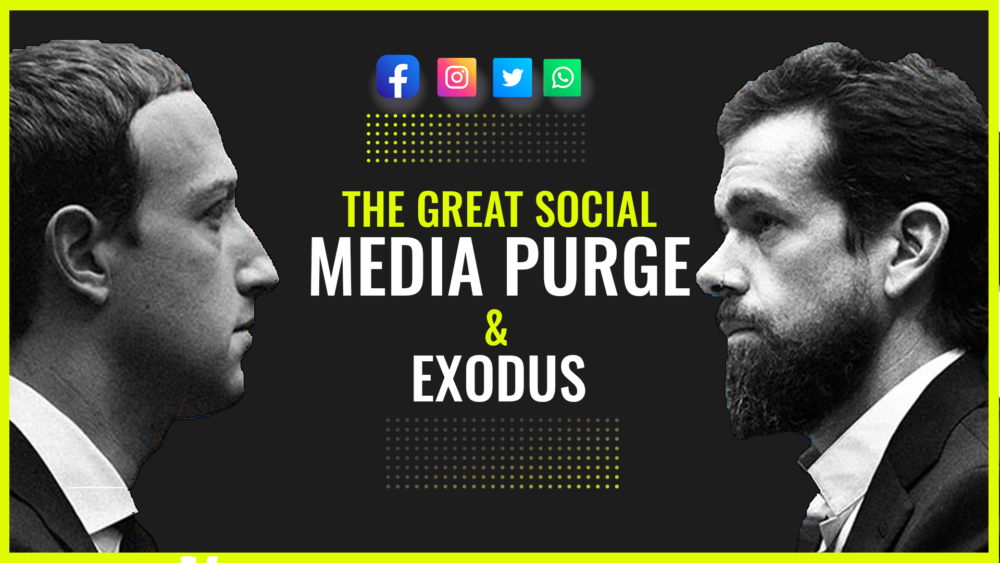 I consider the author Neal Stephenson a visionary. For example in his 1999 novel Cryptonomicon, he essentially describes a Bitcoin type cryptocurrency, almost a decade before it existed.

In a past video, I described his idea in The Diamond Age of “distributed governments” which provide insurance-like services to customers, regardless of the geographic area they live in. Customers were free to choose their own government, or go without one.

Stephenson has another fascinating, newer book called Fall, or Dodge in Hell, in which the internet splinters after a massive hoax convinced people online that an entire city had been wiped off the map.

So the way the internet functions in the book after that event is people start hiring “editors” who curate a content stream for the customers, to filter out the truth from the fake news online.

And naturally this leads a massive divergence and splintering of society, when some factions filter everything according to the “truth” of the bible, while others go full blown science– at least their version of it.

Then you have the crypto-anarchists, the one who want to live forever by inserting themselves into a computer when they die, and some relatively normal editors as well.

There are just absolute different realities that people live in, based on what they choose to believe, and based on the information put in front of them on a daily basis.

Now of course this was fiction, and Stephenson was surely not trying to predict the exact circumstances that might cause a split like this. But he was able to identify the end result, where not just our internet, but the entire society would end up.

I believe we have recently witnessed a major catalyst to the splintering of the internet– or really just the downfall of the big tech “monopolies.”

On January 6, 2021, a mob of Trump supporters stormed the Capitol building in Washington DC, in an apparent attempt to overturn the results of the election.

This lead to a social media purge– but not just against Trump supporters promoting violence. The scope of the purge was much larger, almost like the event was being used as a “Reichstag fire” excuse of sorts to get rid of anyone these big tech companies disagreed with.

For example, former Congressman and Presidential Candidate Ron Paul, who spent years criticizing Trump’s monetary and national defense policies, and had nothing to do with the storming of the Capitol, was suspended or locked out of his Facebook page.

Parler, an alternative to Twitter and its woke mobsters, was ‘canceled’ when Apple and Google removed it from the app stores, and Amazon stopped hosting the website on its AWS servers.

Payment processors like Visa, PayPal, and Stripe also went full activist, as did domain registrar GoDaddy. And Youtube had already been purging arbitrarily for some time.

Now users of these platforms and products have to watch what they say, if they don’t want to be removed. They have to make sure they don’t express the wrong opinions, or contradict some woke ideology.

The message is clear: behave and think exactly as we tell you, or you will lose everything you have worked for, in the blink of an eye.

The big tech companies just told about half their users, ‘Please, give your business to our competitors. You are not welcome here.’

Because these big tech companies are replaceable. While they arrogantly silenced, minimized and mocked any who didn’t join the woke mob, their competition was hard at work.

And let me reiterate that while Trump and the Capitol riots may have been the catalyst, this has nothing to do with political ideology, and everything to do with free speech, privacy, and control over your own data and livelihood.

There are alternatives to the big tech companies. And this is the straw that broke the camel’s back.

For example, Telegram, a private messaging app which allows you to enable encryption in private chats, attracted 25 million new users in a 72 hour period, and now has over 500 million active daily users worldwide.

Personally, I noticed dozens of my contacts have joined an even better encrypted messenger, Signal, in the past couple weeks. And indeed, almost 18 million people dowloaded the app between January 5th, and January 12th– a 61x increase.

Meanwhile, Facebook owned WhatsApp’s downloads were down about 20% week on week.

The social network Gab and the private email service Protonmail are also being spoon fed new customers by their biggest competitors, just to name a couple examples.

Because let’s be honest, they are the top companies for a reason. They have great products that were in most cases the first of their kind. There had to be a really good reason to stop using them, a slap in the face to their customers.

I admit, I was using Google Docs until this happened. I’m sure there are a lot of people like me who knew for some time that they should really find an alternative, but never were jolted into action… until now.

Now the competition is real. It wasn’t before. And that’s why no one used them.

Why would I waste my time putting my videos in other places, when Youtube delivered the biggest audience?

But now, with so many people looking for alternatives, there actually could be a critical mass using the video platforms like Rumble, Brighteon, Odysee (LBRY), or Bitchute— places I’ll be posting all my videos from now on.

In fact, this video will also be my first I upload to some of these platforms.

So if that’s where you are watching this, let me say thank you! I appreciate the support, and I am excited that we are on this journey to decentralized control over our own content and data together. It’s important.

In a sense, just like in the Neal Stephenson book I mentioned earlier, you’re allowing me to be your “editor” of sorts, and process information from books, news, and other sources, and present it to you with my own opinions and expertise.

I take that seriously, and I will always strive to strike an educated, rational tone, while staying highly critical of the status quo, and entrenched institutions.

Because these times offer a lot of opportunity to rebuild, and change things for the better, but they also can be treacherous.

The last thing you would want at this time is to become emotional, overwhelmed, and make a misstep. You definitely don’t need any extra fake news or conspiracy theories clogging up your mind– the truth is crazy enough already.

My content is about taking control back over your own life, as well as building spheres of influence to rely less on the the entrenched, and often corrupt, institutions like big tech companies, governments, the US dollar, corporate media, higher education, and so on.

The tumultuous times we are witnessing may seem out of control, but that is clearly what an elite, grasping to maintain control, wants us to feel. The lashing out of a cornered, dying beast can be violent and dangerous.

And that’s why I advise not to confront the beast and paint a target on your back, but to build and participate in alternatives. The establishment is doing pretty well at destroying itself anyway.

All we need to do is make sure that our families, friends, and communities have leaders and services to fall back on, in the inevitable power vacuum that comes from crumbling empires.

We have to be there to make sure it is replaced by something better. And I have a lot more to talk about on this subject moving forward.

These are scary times, but they are exciting times.

With all this in mind, you never know when I will get cancelled, and deleted from Youtube, so please follow at least one of my alternative video channels in the description, I’ll be posting all the same content on each.

But from here on out, there will be some videos that I won’t even bother posting on YouTube because they are too controversial, so I am just going to go straight to the alternatives, so you will want to follow me there for some exciting content upcoming.

And finally, join the email list in the description, as that will ensure we never lose contact, even if platforms start dropping me.