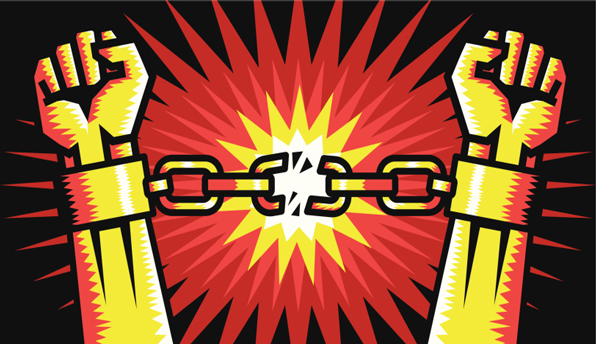 "Free Jeff Mizanskey" Efforts Continue with Billboards and 360,000 Signatures … The billboard is on I-70 in Saline County. Efforts to release Jeff Mizanskey, the only man in Missouri serving a life-without-parole sentence for a nonviolent marijuana charge, are continuing this month with help from Show-Me Cannabis and Change.org. Show-Me Cannabis has bought billboard space on I-70 near Kansas City (and near Sedalia, where Mizanskey was arrested). The billboard features a photo of Mizanskey and says: "Life without parole for cannabis? It's time we fix our unjust marijuana laws." – Riverfront Times

Dominant Social Theme: Justice is blind, but it can also evolve.

Free-Market Analysis: For many years the High Alert "brain trust" has pointed out that one of the last memes of the power elite to come under sustained pressure would be the theme of Western "justice." This would be an inevitable part of what we call the Internet Reformation.

The popular idea of Western justice as relayed by the mainstream media is that it is a precise discipline – a science almost – administered by a professional policing caste. However, the reality is a good deal more chaotic. J. Edgar Hoover, founder of the FBI, liked to say that the purpose of the Bureau was to enforce law and order not to pursue "justice."

But many people in the Western world, in the US in particular, grow up thinking that the purpose of law enforcement is indeed to generate "justice" for perpetrators and victims alike.

And thus, as the Internet itself reveals more and more information about the growth – and fundamental injustice – of the penal-industrial complex, people gradually begin to scrutinize the system more closely.

In Europe, the process is manifest in popular discontent with economic and political policies. In the US, the discontent may run deeper sooner, and focus on the justice system itself.

The recent Bundy affair and, of course, the myriad of scandals besetting Congress and the executive branch of government are symptoms of a deeper discontent. The recent moves to decriminalize and even legalize marijuana will also have an impact.

We can see this in the recent furor over the incarceration of Jeff Mizanskey.

John Payne, executive director of Show-Me Cannabis, says this will be the first of several billboards the pro-legalization group will put up regarding the state's marijuana laws. In addition to Mizanskey, the group is planning to feature other victims of current marijuana laws, including people who need to use medicinal marijuana.

But billboards aren't the only way Mizanskey, who is nearing 21 years in prison for racking up three marijuana felonies (the biggest being only six pounds of pot), is getting attention for his plight. According to Tony Nenninger, an attorney who has helped garner attention for Mizanskey's clemency efforts, a press conference will be held this month in Jefferson City to deliver a Change.org petition to Governor Jay Nixon asking for Mizanskey's release.

"There are over 360,000 online signatures that will be reduced to paper and carried up the steps to the governor's office," Nenninger tells us. The press conference will be held at 1 p.m. on April 28 near the capitol rotunda.

Jeff Mizanskey was convicted under Missouri's "Prior and Persistent Drug Offender" statute, the only drug-specific three-strike law in the country. Each of his felonies were for marijuana, the largest being approximately six pounds, which he didn't even have on him.

For millennia people solved their difficulties via third-party adjudicators that were often private in nature. Alternatively, people simply negotiated their differences face-to-face. There were various forms of ritual violence – including duels and feuds – that made it prudent to make monetary settlements rather than to continue quarrels.

But in the past 100 years, the state has grown to command the dispensation of justice in the Western world, and nowhere is this trend more advanced than in the US, which administers a penal facility that numbers some six million individuals in various stages of incarceration.

It was always inevitable that the Internet was going to focus considerable attention on the current state-mandated judicial system.

As laws and regulations come under more scrutiny as the 21st century rolls forward, people will not be content merely to describe what has taken place in the West as an evolution of the "rule of law." Those who for one reason or another expect these fundamental building blocks of society to remain the same will likely be in for a shock.

Chances are there is a fundamental economic, judicial and sociopolitical realignment that will take place before this latest "information revolution" runs its course.

This will have myriad impacts, including investment-oriented ones. Some, in fact, may be portrayed as negative. But change will come.