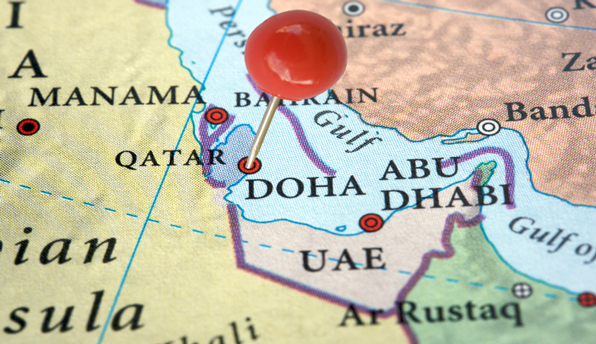 Dominant Social Theme: These wars are unpredictable and have to stop.

Free-Market Analysis: Is Qatar the next hot spot? We know the West has been whipping up trouble throughout Northern Africa and the Middle East. And it's an open secret that the Anglosphere in particular has made trouble in Ukraine.

But now it looks like the same thing may be happening in Qatar. As you can see from the above article excerpt, Qatar is engaged in a serious diplomatic quarrel with the UAE, Saudi Arabia and Bahrain.

Truly, peon fighting peon. Qatar is a virtual US fiefdom along with the UAE and Saudi Arabia. Bahrain might not even exist without British support, which has enabled Bahrain's terrible rulers to violently suppress their miserable subjects.

None of these countries are going to do anything of significance without Western backing. Ergo, this development is presumably something the West and the Anglosphere have little concern about. Or, worse, are actively encouraging.

Qatar has been a maverick in the region, backing Islamist groups in Egypt, Syria and elsewhere in the Middle East that are viewed with suspicion or outright hostility by some fellow GCC members.

The statement said GCC members had signed an agreement on November 23 not to back "anyone threatening the security and stability of the GCC whether as groups or individuals – via direct security work or through political influence, and not to support hostile media".

GCC foreign ministers had met in Riyadh on Tuesday to try to persuade Qatar to implement the agreement, it said. Media reports described the meeting as "stormy".

"But unfortunately, these efforts did not result in Qatar's agreement to abide by these measures, which prompted the three countries to start what they saw as necessary, to protect their security and stability, by withdrawing their ambassadors from Qatar starting from today, March 5 2013," the statement said.

GCC countries "have exerted massive efforts to contact Qatar on all levels to agree on a unified policy… to ensure non-interference, directly or indirectly, in the internal affairs of any member state," the statement said. The nations have also asked Qatar "not to support any party aiming to threaten security and stability of any GCC member," it added, citing media campaigns against them in particular.

The statement stressed that despite the commitment of Qatar's emir Shaikh Tamim Bin Hamad Al Thani to these principles in November, his country has failed to comply. Media reports have said that Shaikh Tamim was given an ultimatum by Saudi Arabia in the November meeting in Riyadh that was facilitated by the Kuwaiti emir, Shaikh Sabah Al Ahmed.

The new emir was told to change Qatar's ways and bring the country in line with the rest of the GCC with regards to regional issues. The GCC has in particular been concerned about Qatar's support for the Muslim Brotherhood, its close relations with Turkey, its opposition to the new regime in Egypt and its perceived support for Al Houthi rebels in Yemen.

You can see the "hot button" issues above and they are very interesting. The CIA Muslim Brotherhood has been the organization of choice to take over destabilized countries, including most prominently Egypt. Qatar's support then is surely not an accident.

Qatar's vast US military base provided critical support for the second invasion of Iraq. It's Al-Jazeera media property is widely recognized by now as a kind of Western false-flag – staffed originally by BBC reporters – and its ruling family has continued close relations with the US.

But in a sense Qatar is no different than Saudi Arabia, which has prospered beyond telling due to its cooperation in refusing to take currencies other than the dollar for oil. As Saudi Arabia is the "swing" – or marginal – producer of oil in the world, it has been able to enforce this policy at the behest of the US.

The UAE, as we have long noted, is a virtual test tube combining Islamic and Western finance together. The results are to be rolled out throughout the Muslim world as part of a grand homogenization of Eastern and Western practices. Always the considerations are globalist ones …

Bahrain, we've already mentioned. That tiny island country has been torn by protests and is only uneasily propped up by Britain's internationalists – which Bahrain's royal family looked to when citizen unrest threatened to turn an authoritarian rule into a democratic one.

This is spat between puppet states and if anything comes of it, you can be sure the West's hands-off stance is not accidental. Certainly, the Saudis have felt the heat from the advancement of such technologies as fracking.

These days the Saud family and perhaps the rest of the Middle Eastern puppet states see the proverbial writing on the wall. That's why they want a statement from Qatar "… to ensure non-interference, directly or indirectly, in the internal affairs of any member state."

Obviously, various GCC countries are quite nervous that Qatar may be used to introduce the kind of instability into their countries that is now afflicting the rest of the Middle East. The West's internationalists are a merciless bunch. Do business with them and sooner or later you will face the consequences of accepting their largesse.

Western powers practice polarization and if one adopts the working hypothesis that the Anglosphere in particular wants to create an Islamic axis in the Middle East, then Saudi Arabia can easily be polarized – and even transformed into a kind of fundamentalist Islamic Republic (versus a royalist one). The resultant tremors would surely shake the world, but it seems these days that the power elite is actively encouraging such trends. Out of chaos … order.

The tension between the UAE and Qatar has similar elements. Qatar has accused the UAE of not supporting Islamic factions sufficiently; ongoing tensions may force UAE rulers to adopt more Islamic sentiments.

Finally, it could be that as Qatar has just had a regime change with the ascension of Emir Tamim, Western powers may want to educate the current regime about the consequences of not cooperating enthusiastically.

One way or another, it seems the Islamification of the Middle East continues apace. And perhaps there is groundwork being laid for further destabilization, this time of the GCC states – a situation that would have seemed hard to imagine only a few years ago.