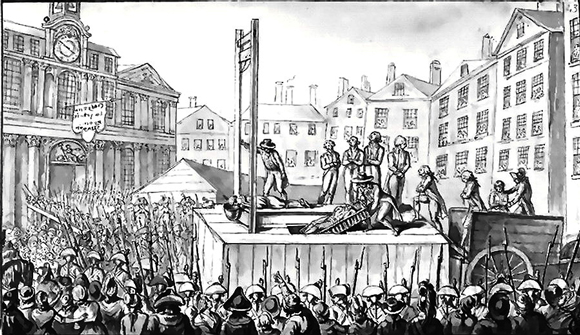 French President François Hollande was quick to declare a state of emergency in the wake of Friday's bloody terror attacks in Paris. But what does the "etat d'urgence" mean for the country and its citizens as they go about their daily lives? The state of emergency measures are set out in a 1955 law and are designed to be used in "cases of imminent danger resulting from serious breaches of public order, or in case of events threatening, by their nature and gravity, public disaster." – France24.com

Dominant Social Theme: You have to break some eggs to make an omelet, even if they are freedom's eggs.

Free-Market Analysis: Tough times call for tough measures and in this article, we'll discuss the ramifications of the resolute countermeasures that President Francois Hollande is prepared to take. The bill to declare an apparently open-ended "state of emergency" in France is being presented to Parliament today.

Yesterday we posted an article entitled "Ron Paul Calls Terror Coalition an 'Over-Reaction.' " Paul's point was that uncoerced enterprises and trade were preferable to the application of military might when it came to creating prosperity and peace.

But in the current era, top government officials are quick to argue that "security" measures are more important to creating and sustaining civil society than the actual marketplace products of society. In other words, one arrives at Western-style civil society through the application of military force.

We prefer Ron Paul's approach. It makes more sense to us that the market itself should operate and create alliances that would damp the prospect of any violence. After all, if a peaceful society is engaged in wealth-creating commerce, that society has every reason to police its own actors.

In such societies, citizens will themselves undertake the task of reducing or eliminating violent threats because they have the most to lose. But this is not the way of the West currently. For Hollande and other Western leaders, security apparently means invasion, bombing and violent, scorched-earth policies that will inevitably engender more of the violence that these tactics are intended to remove.

These policies are applied abroad, but variants of them are also applied at home. As ill-conceived as the military solution is abroad, so "states of emergency" are equally destructive domestically, though the violence in these programs is less overt. But it is certainly present.

Domestic countermeasures inevitably suspend freedom and empower the state in numerous, emphatic ways. France's domestic solutions as expressed in Hollande's planned state of emergency are severe, indeed. They were designed to be applied to public unrest in Algeria and suspend numerous laws in France designed to protect civil society from the hammer of state power.

The article excerpted above gives us a flavor of what "state of emergency" means in France. It is a significant abridgement of citizen rights and was actually tailored to remedy an outbreak of violence in Algeria in 1962. It has only been applied once since then – until now.

The measures give a number of exceptional powers to the authorities, including the right to set curfews, limit the movement of people and forbid mass gatherings, establish secure zones where people can be monitored and close public spaces such as theatres, bars, museums and other meeting places.

The state of emergency also gives more powers to the security services and police, such as the right to conduct house searches at any time without judicial oversight, enforce house arrest and confiscate certain classes of weapons, even if people hold them legally.

The article informs us that security forces can "conduct house searches at any time without judicial oversight." In bluntest terms this means that police and military officials do not need a warrant to search and arrest. Citizens are no longer secure in their "property, houses, papers," etc.

International entrepreneur Simon Black provides us with further insight into how far France can go – and has gone, historically – in terms of abrogating citizens' fundamental rights. In an article entitled "France's answer to terrorism: The Law of Suspects" he describes the depths to which the French government descended during the French Revolution of the late 1700s.

He points out that France was terribly unsettled at this point, with violent protests breaking out around the country on a regular basis. Both Austria and Prussia had sent agents into France to provoke yet more chaos. "People hit their breaking points," he writes, "and cried out for government to save them."

On April 6, 1793, the government created the Committee of Public Safety with broad "emergency powers." Here's more:

And under the leadership Maximilien Robespierre, the French people got their protection. Robespierre passed the 'Law of Suspects', allowing the government to essentially imprison anyone they wanted for any reason.

… People were required to carry special certificates indicating that they were good and dutiful citizens. Those without would be imprisoned, and potentially executed … Then there was the Law of the Maximum, which attempted to stabilize an ongoing financial crisis by fixing the prices of goods and services in the country. The law also imposed the death penalty on those who did not follow the rules.

They also passed the Law of 22 Prairial, which awarded the Committee even more power to arrest, try, and execute anyone deemed to be suspicious or disloyal. The law also prevented anyone accused of a crime from being able to call witnesses or have defense counsel. Plus it required that ALL citizens report potentially suspicious or disloyal neighbors to the Committee. If you see something, say something.

Black provides us the name of this French interregnum: It became known as the Reign of Terror – from which we get the word terrorist. He also points out that in its first application, the word "terrorist" was applied to government officials.

Will France go this far today? One is tempted to say, "Of course not." The lessons of history still apply and the French are aware of the tragic excesses of the revolution. But one also ought to be aware of disturbing trends.

When the US rounded up potential "terrorists" and imprisoned them in Guantanamo Bay in Cuba, for instance, the process was certainly similar to that of the Reign of Terror. Many were imprisoned for more than a decade before being released and had no opportunity to address the "evidence" that had imprisoned them in the first place, much of which was dismissed anyway. Of course, many are still there and at least eight have died in prison or after their release.

Thus we can see there are already modern precedents for what happened in France, and unfortunately – though people don't like to acknowledge it – it's only a few steps from imprisoning foreign "terrorists" without due process to doing the same thing to supposed domestic ones.

This brings up a larger, unpleasant point, which is that for the most part measures aimed at counteracting terrorism end up having a considerably negative impact on domestic freedoms generally.

One can argue whether or not this is actually the purpose of such measures, but even leaving aside theoretical analysis, the reality is one that should give most people a sense of urgency when it comes to retaining their wealth and securing their families.

The ramifications should be clear: The West is entering an era where civil rights will likely be repressed and restrictions will be placed on numerous freedoms we take for granted.

Moreover society is about to become much more hierarchical because of a new sociopolitical paradigm now being implemented around the world. We call this paradigm "technocracy" and it creates a privileged class of corporate workers that will have legal privileges not available to most citizens.

There is, however, still time to generate similar privileges informally before they become less available due to law and societal repression. We talk about these solutions regularly and they are intended to counter the challenges of modern times. Consider taking "human action" whenever possible.