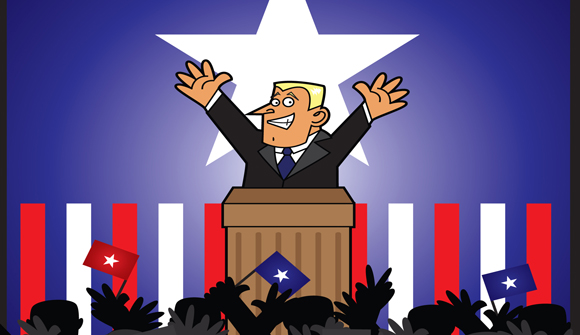 Although Rand Paul — who declared his bid for the presidency on Tuesday — has spent several years now inching toward the Republican mainstream, there is still a tendency among the political classes to view him as a sideshow candidate. The crankiness of his announcement-week interviews certainly suggests that he's still getting a handle on retail politics. And though his policy views — calls for more rational sentencing guidelines, a less intrusive national-security apparatus and a restrained foreign policy — give him potential appeal with young, minority and libertarian-leaning voters, they also make him an outlier in the field of declared or likely Republican contenders.

Paul's (relative) unorthodoxy makes him that rare candidate whose policy views draw gobs of media attention: He's teaming up with Democrats to scale back mandatory-minimum drug sentencing and likens the war on drugs to Jim Crow? (The same Rand Paul who once said he opposed parts of the Civil Rights Act?) He's in the same party as Senator John McCain, and yet he opposed arming the Syrian rebels?

But in fact, it's the boring details of the organization that Paul is building that provide the best reason to take him seriously. If Paul's views are unusually idealistic, the ground game that his team is planning is pure realpolitik. His staff is focused on the delegate math and party rules that could determine the next Republican nominee — a game-theory style of presidential politics at which the Paul team is particularly adept. – New York Times, April 10, 2015

And so it begins. Rand Paul is a "sideshow" whose "crankiness" suggests he is "still getting a handle" on running for the White House. NYT writes as if these are problems. The opposite is closer to the truth.

Dr. Paul the Younger faces an uphill battle if he hopes to reach the White House. The NYT article focuses on his campaign staff's ability to play the "ground game" and rack up delegates as his father did with well-organized presence in local caucuses and state conventions.

The question for liberty-seeking citizens is now whether, and how fervently, to support the Rand Paul 2016 campaign. The answer depends in part on each individual's philosophy.

Anarchists who believe the government itself is illegitimate, regardless who heads it, may react with a shrug. Electoral politics is simply a chance to choose your poison.

Libertarian, minimal-government advocates will have a more practical dilemma. Can a President Paul, or anyone else, overcome entrenched institutional opposition? If it is possible, can Rand Paul avoid the corrupting temptations of power and remain true to the principles he claims?

The temptations and pressure will surely be enormous. As the only candidate who is even mildly non-interventionist, he will face furious attacks from the military-industrial complex. Likewise, the prison-industrial complex will mobilize against his ideas to curtail the drug war.

Sen. Paul will, if nothing else, force the other candidates to respond to some uncomfortable questions. Being an "outlier," as NYT calls him, could prove his key advantage. The other Republicans are little different from each other, which means they will split the vote on their side. They might leave Rand Paul holding a plurality in the early primaries.

A couple of primary victories plus that solid ground game may not be enough to win the nomination, but they will certainly win attention for a more freedom-oriented agenda. In the end, that may be all Rand Paul accomplishes. It will be less progress than many might wish, but progress nonetheless.