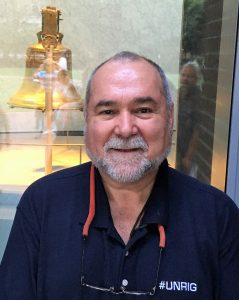 Robert David Steele (known to many as simply RDS) – controversial figurehead of a new way forward in the information age and fighter for human liberty – died attached to a ventilator in a Florida hospital on Aug. 30.

His last published words via Phi Beta Iota Public Intelligence Blog, from a hospital bed where he struggled to oxygenate his blood:

“This is been a near death experience, very much like a new death experience the whole country is going through right now.  We will never be the same because now we know that we’ve all been lied to about everything.  But, now we also know that we can trust each other.”

The Open-Source-Everything Revolution: The Enduring Legacy of Robert David Steele

“Steele started off as a Marine Corps infantry and intelligence officer. After four years on active duty, he joined the CIA for about a decade before co-founding the Marine Corps Intelligence Activity, where he was deputy director. Widely recognized as the leader of the Open Source Intelligence (OSINT) paradigm, Steele went on to write the handbooks on OSINT for NATO, the US Defense Intelligence Agency and the U.S. Special Operations Forces. In passing, he personally trained 7,500 officers from over 66 countries.

But the CIA wasn’t happy… the clash prompted him to resign from his position as second-ranking civilian in Marine Corps intelligence, and pursue the open source paradigm elsewhere. He went on to found and head up the Open Source Solutions Network Inc. and later the non-profit Earth Intelligence Network which runs the Public Intelligence Blog.”

In his open-source manifesto, Steele explains the impetus for his life’s work:

“We are at the end of a five-thousand-year-plus historical process during which human society grew in scale while it abandoned the early indigenous wisdom councils and communal decision-making. Power was centralized in the hands of increasingly specialised ‘elites’ and experts’ who not only failed to achieve all they promised but used secrecy and the control of information to deceive the public into allowing them to retain power over community resources that they ultimately looted.“

As a trusted contact of mine in the COVID-19 information war adds as a summary to every correspondence, his succinct closing “let there be more light” was essentially Steele’s mantra – a worthy and noble one – which he not only espoused but turned into action through blood, sweat, and tears:

“Sharing, not secrecy, is the means by which we realize such a lofty destiny as well as create infinite wealth. The wealth of networks, the wealth of knowledge, revolutionary wealth – all can create a nonzero win-win Earth that works for one hundred percent of humanity.”

Open-source-everything, in a world of jealously-guarded information resources, has its enemies – most prominently, the corporate state.

Predictably, the corporate media took the opportunity of Steele’s death to do the only thing it knows how: dance on the graves of its dead opponents while simultaneously promoting its COVID agenda.

“Robert David Steele, a former CIA officer turned conspiracy theorist who claimed to be the first person to call COVID-19 a hoax, has died from COVID-19…

Steele was in Florida for the final dates of his Arise USA tour, a three-month trek across all 50 states, during which he spread conspiracy theories about COVID-19, election fraud, and former President Donald Trump’s supposedly imminent return to office. The tour had run out of money, but Steele was continuing to show up to events on his own.”

Vice followed all that up with the usual ad hominem attacks by association (including his many appearances on InfoWars and alleged association with QAnon) and opaque claims of anti-Semitism.

Carbon copies of essentially the same hit-piece ran in multiple publications. These outlets and their editors run on carefully choreographed scripts that never fail to push the official narrative, regardless of how unseemly or grotesque.

In this case, that narrative at play is that anyone who publicly expresses skepticism of the “public health” response to COVID-19 deserves to be publicly ridiculed upon death.*

*A lesson to liberty fighters: any of us who die — assuming our public profiles are large enough to warrant corporate media commentary, as Steele’s was – can expect that our legacies will take incoming enemy fire before we go cold.

To be maligned by The Independent, Vice News, et al. is a badge of honor; RDS’ surviving family, rather than being shocked or saddened, should rather be emboldened and gratified.

Even face-to-face with death, RDS stayed true to himself and those who shared his vision of a more open, freer world. He refused until the bitter end, likely under immense pressure from hospital officials around him, to endorse the so-called “vaccines” or to express remorse for his life’s work.

“Steele, who was among the earliest QAnon promoters and helped the conspiracy theory move from the fringes of the internet into the mainstream, was hospitalized with symptoms of COVID-19 earlier this month. But he continued to spread anti-vaccine and COVID-denial conspiracy theories until the end.”

Let Steele serve in death as he did in life as an exemplar in this context: never bend the knee, never relinquish your sincerely-held convictions out of fear of ridicule or other social consequences. Let your solace be that history will vindicate you.

Suck it up, take it on the chin, and soldier on. This is information warfare – and all is fair in love and war.

The day after Robert David Steele died on a ventilator in a Florida hospital, I sent him an unanswered email with notes on things. That may have been the first one I’ve ever sent to a dead man, much less one I respected immensely and felt affinity for.

At the risk of propagating tripe cliché, death comes for all of us, eventually. The passing of RDS forced me, at least momentarily, to reflect on what I’m doing here with my life on a deadline.

For the sake of all who have passed onto the Great Beyond and can do no more in this world, kiss your wife/husband, and hug your children if you have them. Shake your neighbor’s hand and help that widower with her grocery bags.

Karma will take care of the rest.