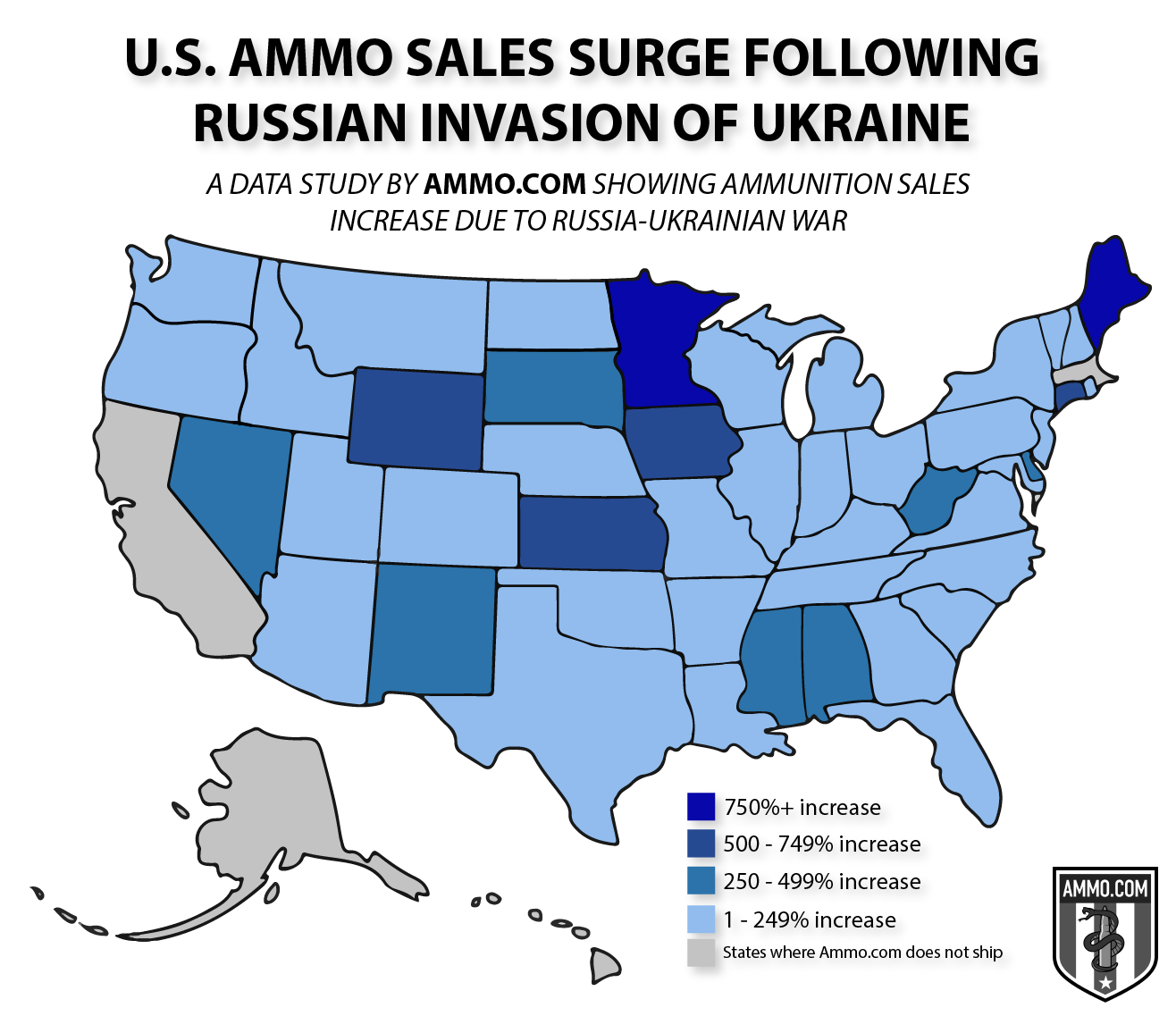 March 11th, 2022: On February 24, the Russian Federation launched air attacks on military installations and airports across the nation of Ukraine. This occurred shortly after the Russian President, Vladimir Putin, declared the separatist states of Donbas and Lugansk independent from Ukrainian control and sent his army in to “keep the peace” the day before.

Here at Ammo.com, sales have surged for the last two weeks, starting with the Russian invasion of Ukraine on February 24th:

The table below lists the top 10 states by total sales volume from February 24th until March 10th, and their corresponding percentage increase in sales volume when compared to the previous time period.

Scroll down for a comprehensive breakdown of the effect Russia’s invasion of Ukraine has had on our recent sales from February 24th until March 10th.

Note: Due to city and state laws, Ammo.com does not ship ammunition to Alaska, Hawaii, Massachusetts, California, Washington, D.C., New York City, or Chicago. These jurisdictions, along with a handful of other states, have been excluded from the table above.

American gun owners are watching visceral, daily reminders of one reason why an armed populace is important: To defend against enemies, both foreign and domestic.

Weary following 2 years of a pandemic, protests, and the Biden presidency, the recent spike in sales indicates they are again worried about their capacity to buy ammo when they need it.

This could be caused by a fear that the Biden administration could use the Russian invasion of Ukraine as a clever means by which to “temporarily” ban private ammo sales by executive fiat in order to ostensibly send those rounds to NATO members and/or Ukraine in order to “support the war effort.”

After all, who knew before the pandemic that the CDC could unilaterally put a nationwide moratorium on evictions, eviscerating private property rights and contracts for over 18 months, until the Supreme Court finally curbed their previously-unknown power because Congress was gridlocked, per usual?

At a macroeconomic level, this worry about ammo availability could be caused by global supply chain shortages, which all Americans see daily reminders of when shopping or filling up. Or this could be caused by inflation pressures, which are silently devaluing their hard-earned dollars after the Fed increased the money supply by ~25% and Congress increased the federal debt by ~20% to combat COVID.

American gun owners are well aware of the candid political calculation made famous by Rahm Emanuel, Pres. Obama’s Chief-of-Staff, who said “You never want a serious crisis to go to waste. And what I mean by that is an opportunity to do things you think you could not do before.”

It does not take a particularly active imagination to envision what those in Washington, who notoriously take advantage of tragedies to pass irrational laws when emotions are at their highest, might do to demonstrate “their solidarity” with Ukraine.

By now, the average American gun owner has cumulatively witnessed thousands of instances whereby those in charge of our federal institutions demonstrate an incredible ability to accumulate and exercise power for their own enrichment. And are seemingly never held to account for their abuses of power, no matter how egregious or widespread. Hence why public trust in government continues to poll near historic lows.

Given the past 2 years and the current state of affairs, both domestically and now internationally with Russia’s invasion of Ukraine, you can begin to understand why the average American gun owner wants to stock up on ammo while they can.