New York City police arrest artist who created drone satires … Last week, The New York Police Department (NYPD) arrested Essam Attia, an artist who had designed and surreptitiously placed satirical posters dealing with the NYPD's potential use of pilotless drone aircraft. Attia and a team posed as maintenance workers who routinely replace advertisements in plastic cases at bus stops and other public locations. The posters simulated NYPD public service announcements and depict drones firing missiles at fleeing civilians. One of the posters says, "NYPD drones: Protection when you least expect it." An NYPD logo appears at the bottom of the image. In what amounts to a political vendetta against Attia for daring to criticize the police, the artist has been charged on 56 criminal counts, including grand larceny, possession of stolen property and a weapons charge for possession of an antique, unloaded .22 caliber handgun. The NYPD appears to have put some effort into hunting the artist down. Officers were seen dusting the poster-boxes for fingerprints in September, shortly after the posters began to appear. – World Socialist Web Site

Dominant Social Theme: This kind of agitation needs to cease.

Free-Market Analysis: There are two problems with the arrest of Essam Attia. The first is that the police apparently went out of their way to arrest him. Thus the NYPD is applying the law unequally.

The second problem is that what Attia is doing is satire and is thus a legally protected activity.

There is another graver problem, as well, which has to do with the culture that propounded the arrest to begin with. The officers, especially the senior officers that gave the go-ahead, probably know the charges won't stick. But the idea is to intimidate.

Why is the NYPD in the business of intimidating artists who want to express legitimate concerns? Well, from the standpoint of dominant social themes, we can make an educated guess.

The larger dominant social theme is that authorities know best. The subdominant theme is that people ought not to mock authority. Here's some more from the article:

In a video interview posted on animalnewyork.com in September, Attia—his voice disguised and face hidden—said that he posted the images "to create a conversation about the deployment of drones in American airspace. We have to remember that right now, internationally, they are being used to kill people. They're armed: they shoot missiles. We're fighting an illegal war in Pakistan and no one seems to want to talk about it."

A US Army veteran who served as a geo-spatial analyst in Iraq, Attia added, "We know some [police] departments in Texas have them. It's only a matter of time before New York has them. … Weaponized drones used to kill American citizens coming to New York City? I'm not sure I'm cool with that."

In February, Congress approved legislation that would allow 30,000 drones in American airspace by 2020. Predator drones, the same aircraft that the US military uses in Pakistan and Yemen, already patrol the US-Mexican border and were used last year by police in North Dakota. The environmental Protection Agency has reportedly been using drones to spy on cattle ranchers in Nebraska.

The sheriff's office in Alameda County, California, was recently forced to suspend the purchase of a surveillance drone after a public outcry.

In New York City, a memo released under the Freedom of Information Act earlier this year revealed discussions between the NYPD and the Federal Aviation Administration in which the NYPD stated it was "investigating the possible use of UAV's [unmanned aerial vehicles] as a law enforcement tool."

The arrest and intimidation of the courageous Attia is unfortunately no coincidence or mistake. It is likely part of a deliberate policy to reduce individual freedoms and the ability of the state to police itself. 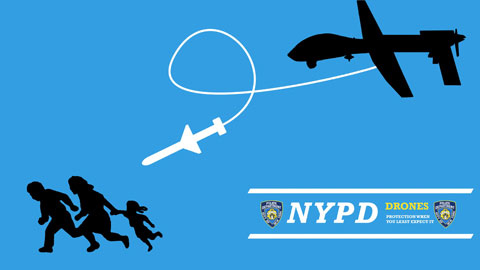 A satirical poster on the potential use of drones by the NYPD.