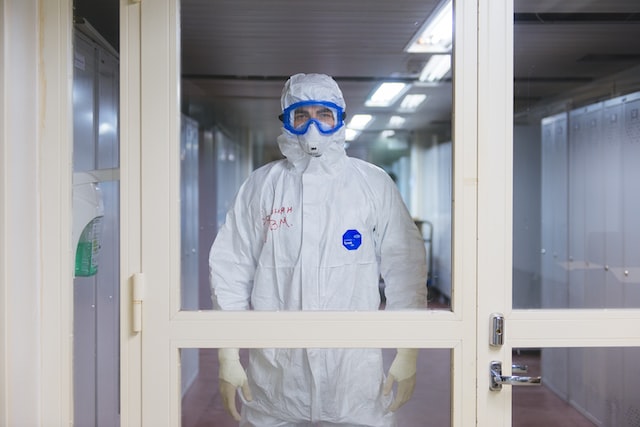 Forget the Jews. What The Artist Formerly Known as Kanye should be going “death con 3” on is the high priests of The Science© who just engineered a COVID strain with an 80% kill rate.

To achieve this miraculous feat, they isolated the Omicron variant’s spike protein (the “S gene”) and Frankensteined it onto the original COVID strain – just to see what would happen:

“To do this, scientists at Boston University’s biosafety 4 research lab attached the more immune evading Omicron spike protein to the ‘backbone’ of an original Covid virus from the start of the pandemic.”

From the research paper itself:

“We generated chimeric recombinant SARS-CoV-2 encoding the S gene of Omicron in the backbone of an ancestral SARS-CoV-2 isolate and compared this virus with the naturally circulating Omicron variant. The Omicron S-bearing virus robustly escapes vaccine-induced humoral immunity,… In K18-hACE2 mice, while Omicron causes mild, non-fatal infection, the Omicron S-carrying virus inflicts severe disease with a mortality rate of 80%.”

So, the chimera they created not only enjoys an 80% kill rate, but it also evades whatever theoretical vaccine-induced immune resistance it might encounter thanks to the Omicron spike protein they gave it.

This viral strain’s existence would presumably be unwelcome news to anyone but the most virulent misanthropes and eugenicists – or, perhaps, executives of Pfizer©, who will soon have a whole new “vaccine” to sell to the US government at a premium.

When criticized, the high priests of The Science© at Boston University played the weaselly Faucian hide-the-ball game in which they pretended, through various logical leaps, to convince the public that what they did actually wasn’t what is it obviously was — gain of function research.

Wading through the gobbledygook in the university’s official rebuttal, the lawyers claim that what they did actually isn’t gain-of-function on dubious grounds such as that the studies were done on animals, not humans, and that the original COVID strain killed 100% of the mice it studied (which is irrelevant to the gain-of-function question).

Never mind that the entire purpose of the paper was to attach the Omicron spike protein to new viruses to make them more immune-evasive. The chimera they created killed 80% of the mice, whereas the naturally-occurring Omicron strain they studied killed none of the mice. The chimera gained pathogenicity.

Their logic falls apart under minimal scrutiny – but obviously that’s too much to expect from the corporate media, which is currently ginning up whatever straws The Science© it can grasp at to obfuscate their guilt.

Notice that the news isn’t “inaccurate” or “nonfactual”; it’s “sensationalized” and “misrepresented.”

It’s actually a positive thing, the Boston University lawyers explain, because such work will lead to more pharmaceutical products that don’t work that Pfizer can bilk the American taxpayer for to the tune of billions of dollars.

Then they get to the kicker:

“Ultimately, this research will provide a public benefit by leading to better, targeted therapeutic interventions to help fight against future pandemics.”

Dollars to doughnuts, when one of the chimeric strains they invent escapes the lab and slips into the general population, the same Boston University researchers credited on the paper will land brand-new jobs engineering “therapeutics” to combat the virus they unleashed.

Instead of being punished for their evil recklessness, they’ll be handsomely rewarded. The corporate media will laud them as heroes once their new drugs get put on the market, and liberal mothers will flock to the nearest Walgreen’s© facility to inject their children with them.

Windfall profits, professional accolades, and social prestige – what more could a sociopathic researcher hope for?

What the Boston University high priests of The Science© neglect to mention in their denialism is that they are splicing various virus parts onto other strains to try to see what drives pathogenicity. That is what they did, no matter how hard their shyster lawyers bastardize the English language.

Here’s what gain-of-function actually meant before The Science© rewrote the definition Animal Farm-style to suit its own purposes, just like it did with the definition of “vaccine” last year, per News Medical:

“Gain-of-function research (GOFR) refers to the serial passaging of microorganisms to increase their transmissibility, virulence, immunogenicity, and host tropism by applying selective pressure to a culture.”

The scientists made the original COVID strain they manipulated more infectious by evading humoral immune responses.

This is collective psychosis. The scale of The Science©’s high priests’ potential destruction would make the most ambitious, bloodthirsty dictators in history blush.

Boston University’s colleagues at the Wuhan Institute of Virology already caused millions of deaths from the virus itself (the preponderance of circumstantial evidence as well as common sense indicate). Then millions more from the terror-driven lockdowns and vaxx mandates they recommended as the solution to the problem they created.

The only thing that will stop this is a groundswell of popular mobilization so large in scale and forceful in its manner that it cannot be swept under the rug.

The Democrat Party apparatchiks aren’t going to move a finger. The pharma-funded GOP cucks won’t either on their own, but at least they might be sufficiently terrorized by their own voting base to use their vested institutional power – whatever remains of true representative democracy in Congress — to do something.

Every one of this abomination’s authors should be prosecuted for crimes against humanity. That this is Nuremberg II-tier criminality is not hyperbole.