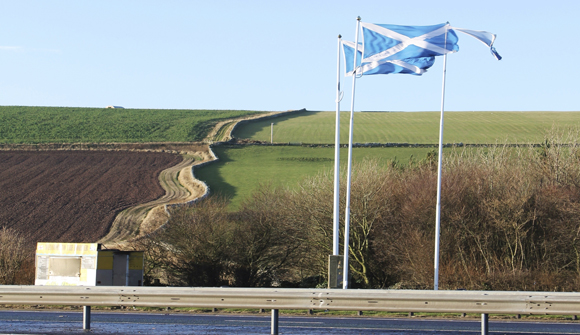 Alone, Scotland will go back to being a failed state … Yes supporters are hoping Scotland will become a Scandinavian paradise. But with its history of bitter internal divisions, it is likely to go the opposite way. The Union was a success partly because it sublimated the bitter Scottish divisions in a larger United Kingdom. – UK Telegraph

Dominant Social Theme: What a disaster. The world needs a union, not a separation.

Free-Market Analysis: We've written about this once already, but we didn't want to write about it again until the aftermath. But then it occurred to us that no matter what happens regarding Scotland, the entropy of the modern age has been advanced. And that's a good thing.

We've been beating this particular drum for a number of years – in fact, over a decade now. The Internet, we came to believe, was a great Yang to the elite's Yin. And that trend continues. Despite all the false-flags and strategies of control, the cultural conversation of the West and even the world is trending away from globalism.

Now, we're also aware that the mainstream press has been giving the Scottish question an incredible amount of attention. That's suspicious, of course, and there could be several explanations.

First of all, it could be that an independent Scotland is intended to writhe in splendid isolation, bereft of money, industry and influence in order to serve as an object lesson to others who may wish to take the same path.

Second, we can certainly imagine that an "independent" Scotland would be one that its officials would meekly guide into the waiting arms of the EU as quickly as possible, thus reinforcing the idea that in this day and age no single European entity can stand alone or apart from the waiting arms of Mother Europe.

Finally, there is the possibility that Scotland's voters reject the idea of independence, which would presumably reduce the overt enthusiasm and support for similar movements elsewhere.

This last point is the one adopted in the Telegraph article we have excerpted above. The author is the famous Niall Ferguson, a complex and witty pundit who styles himself as an anti-EU "conservative" and who has written extensive biographies of both Henry Kissinger and the Rothschild family.

As a court intellectual, Ferguson has pondered why the Anglosphere generally has had so much success in the past 500 years. His conclusion: "competition, science, the rule of law, medicine, consumerism and the work ethic."

No mention here, of course, of central banking or corporate personhood – the utilization of the force of the state to create multinational centralization. The success of the British vision is the success of its banking vision. Ferguson surely knows that, but apparently won't admit it.

This article, then, on Scottish independence, is a good example of a particular kind of elite meme. The attributes that Ferguson cites for successful polity have to do with accepted notions of modern history.

He is simply not honest enough (for a variety of reasons) to admit that Money Power has provided the engine of the West's success. It has nothing much to do with the "rule of law" or the other elements he cites, certainly not in comparison to monopoly fiat banking strategy that has been endlessly refined.

As he is operating from a perspective that abjures fundamental reality, it is easy for Ferguson to decide that many of the secondary attributes to which he attributes primacy will be discarded by Scotland if it were to vote "yes."

Returning to my birthplace, Glasgow, last week (to deliver a long-planned, non-panic-induced lecture), I struggled to work out why it has come to this … What I encountered in Scotland last week was not just a tale of two campaigns. It was a tale of two countries.

My Scotland – as proudly British as it is Scottish, imbued with a sense of our unique historical contribution – is still there, but it has fallen silent. Another Scotland has sprung up alongside it that is quite different. It pretends to be multicultural but is in truth subtly (and sometimes not so subtly) anti-English.

… In the lengthy discussion that followed my lecture, virtually every question was from a Yes supporter. (The worst came from that insufferable type of person who is always claiming to feel "offended" by something. Most, I should say, were civil.)

The common objection was that my argument for the Union was rooted in the past. But what did history have to do with Scotland's future as a new Scandinavian-style haven for egalitarianism, inclusiveness, clean energy, world peace and all the other things implicitly repudiated by the gimlet-eyed Tory bampots?

Well, perhaps there is no point in reasoning with those who have resolved not to learn from history. Nevertheless, let me try to explain why Scotland is not – and is highly unlikely to become – a Scandinavian country. Scottish history offers proof that even the most failed state can be fixed – by uniting with a richer and more tranquil neighbour.

… A key difference between Scotland and Sweden in this era was that Scotland was both small enough and weak enough to be the object of constant interference by its bigger neighbours, England and France. The Reformation made the problem especially severe because it divided Scotland between the Calvinist Lowlands and the mainly Catholic Highlands.

… The reality is that, as an independent country, Scotland would be far more likely to revert to its pre-1707 bad habits than to morph magically into "Scandland". For this debate on independence has opened some old rifts and created some new ones, too.

The key point in this excerpt is Ferguson's admission that Scotland has been the subject of "constant interference" by others. Absent the kind of manipulation that Scotland has faced throughout much of its modern history, the culture of Scotland might yet shine through, with its emphasis on human action, clan culture and freedom.

No matter what happens regarding Scottish secession, the Internet has done its work. In the 20th century, the message regarding this vote could have been strictly controlled. In the 21st century, the conversation regarding Scotland has transcended the actual outcome, whatever it is.

Like so much else in this day and age, the Scottish referendum is taking place on a conscious level and a subconscious one. It is the subconscious argument that is far more important and persuasive.

People know something is wrong now with the way they live and work. And they know as well that there are very possibly other ways of organizing society. The Scottish question and its debate is just more evidence that things need not remain as they are.

The realization that things can change is what is so important about the Scottish vote. Whether Scotland stays or goes, the impact will linger. The 20th century was about consolidation. The 21st century, it seems, may be about devolution.