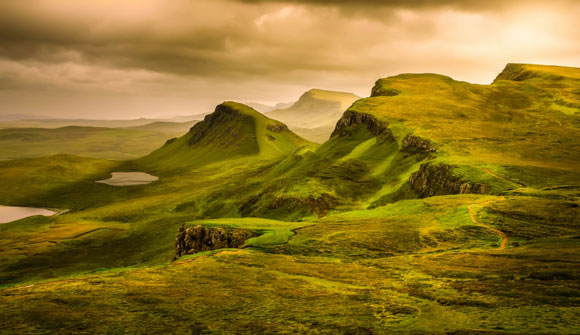 STAFF NEWS & ANALYSIS
Scotland: When Does a Vote Win Before a Vote?
By Staff News & Analysis - September 11, 2014

The mishandling of the Scottish referendum shows exactly why Westminster is so hated … The political establishment down here in the Westminster village has been stung into hyperactivity by the sudden surge of support for the Yes campaign in Scotland. Without very much discussion with their own parties Ed Milliband and David Cameron have reached a joint conclusion: that Scotland's discontent can be overcome and a "No" vote secured by promising the Scots that they can have independence in all but name if only they vote to stay within the Union. – UK Telegraph

Dominant Social Theme: Scotland has no need to leave the union. They can devolve inside it.

Free-Market Analysis: This article is provided to us by Norman Tebbit, a well-known "conservative commentator" and former Thatcher cabinet minister.

His point is that the panicky offer by David Cameron to give more power directly to the Scottish assembly if the Scots vote against independence looks terrible – and is almost bound to be counterproductive.

This certainly makes sense to us … as does Tebbit's larger point that the leadership of Britain these days is focused on expedience rather than principles.

In other words, Milliband and Cameron have reinforced the most irritating aspects of current British rule: It is essentially selfish and lawless. Powerful interest groups compete for influence and privileges and the strongest and most persuasive can come away with the prize. The system has little or nothing to do with what is "just" or "right."

Devolution by the bucketload, it is implied, would allow the Scottish assembly to tax and spend as it pleases while still remaining under the cover of sterling. Whatever the merits or demerits of the "Devo Max" proposals, one thing that strikes me, as an East Anglian, is that no one seems to have thought to ask us, or the rest of the English and Welsh, for our consent to that offer.

Whether we voted Conservative, Labour, Lib Dem or anything else, we did not vote for Scottish independence in all but name. However, the three party leaders have committed us to it and rushed off to Scotland to offer it to the Scots. It seems to be a perfect example of why so many Scots are supporting the severance of the Union.

In short, it typifies the remoteness of that Westminster establishment, not just from Scotland, but the people of England and Wales.

I have long thought that the worst outcome of the referendum would be a victory for the No campaign so narrow that Alex Salmond would just keep campaigning and demanding (just like the EU) another referendum until he gets the answer that he wants. Now it seems he can relax. Messrs Cameron, Milliband and Clegg will grant independence so long as it is called DevoMax.

Already Ukip is riding high in England on a tide of resentment of the high-handed and remote Westminster establishment. That is why Ukip has been picking up support from the once loyal LibLabCon voters.

… In the meantime, that establishment hides away its face from the real problems tearing England apart. The backers of Douglas Carswell will be strengthened by this LibLabCon initiative. …

As of this writing, there are reports that the "no" vote is picking up strength and that sentiment to leave Britain is receding after giving the British political establishment a good scare. But this is not Tebbit's point. His point is that the current British leadership is insufferable and alienating the people it is supposed to represent.

As we stated above, we're sympathetic to this point of view. Our idea is that there hasn't been a leader of gravity in Britain since Margaret Thatcher. Now, Ms. Thatcher's sentiments on numerous issues could be debated – especially her focus on Western military power.

But it was never unclear where Thatcher stood on innumerable issues, and she was determined to create a more egalitarian Britain where people could rise on their merits rather than their connections with the public bureaucracy.

What is not mentioned enough about Ms. Thatcher is that she was at root anti-mercantilist – and that Britain down deep is a mercantilist sociopolitical and economic culture. She irritated a number of people including the Royal Family and the British banking elites because of her views.

Ms. Thatcher was eventually removed, from what we can tell, because she was anti-EU and even more anti-euro. But what has come after her is a series of non-entities like Gordon Brown and upper-class hatchet men like Tony Blair.

David Cameron may be among the worst of them. A man apparently lacking any conviction of note and unencumbered by any kind of moral philosophy, he comes across as a quintessential lightweight. And this is just what Lord Norman Tebbit is complaining about.

Cameron and Milliband are against a Scottish leave-taking. But at the same time, they are willing to grant Scotland an extraordinary devolution to keep Scotland within the union. They are willing to give Scotland the independence its people seek so long as the appearance of the union is maintained.

It shows clearly that the British establishment at its topmost levels is willing to sacrifice principles for the sake of appearances. And this sort of action is well noted in this era of the Internet. It is one more reason, as Tebbit points out, as to why the freedom-oriented rhetoric of political parties like UKIP is becoming more popular.

Ms. Thatcher was many things, but rarely politically expedient. If there must be governments with Western-style, broad-based powers, those governments are probably better off with leaders that strongly enunciate principles and try to stick to them than with wishy-washy leaders like Cameron and Milliband.