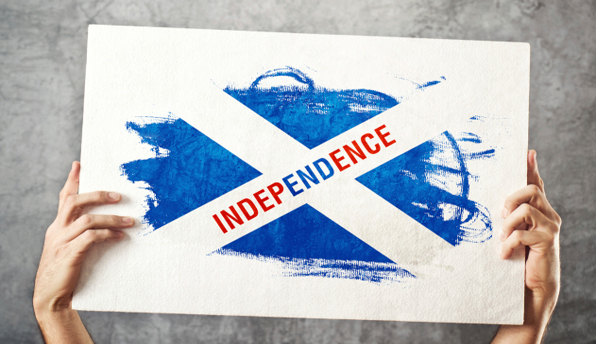 Don't worry, Scotland is not going to vote for independence. That is what people opposed to the idea have tended to think until now. But the Yes campaign has gained ground lately, winning hearts and minds. How is it doing that? What will happen next? And will it be enough to deliver a victory that breaks up the union? – UK Telegraph

Dominant Social Theme: What will happen next? Will Scotland be free?

Free-Market Analysis: The greatness of a great land is long gone. Scotland is the home of dreary socialist cities glowering under a gray sky.

And Scotland's fate will not really change whether it stays with Britain or goes with the EU and the euro.

The choice is to be Europe or Britain. Some choice! Britain is an increasingly authoritarian, corporate state run by banking powers in the City of London. "Europe" is actually run by the same power nexus and eventually – if it doesn't collapse – will have even more rules, regulations, taxes and inflation than Britain. And that's saying a lot.

The upcoming vote on independence may be more important to the City than to Scotland itself.

More on that in a moment …

Support for a Yes vote has surged by 10 per cent since the start of the year, according to a poll of polls by the Financial Times. It dipped briefly when Alex Salmond, leader of the Scottish National Party, bizarrely chose to praise Vladimir Putin. But the overall rise is alarming many who assumed that there was no chance Scotland would ever vote to go it alone.

The Yes Scotland office is bright and modern, all stripped pine and optimistic colours, with free iPads to use in the lobby. The chief strategist, Stephen Noon, a youthful-looking 43-year-old, dismisses "old media and politics" – as well he might, since the Yes campaign is not doing so well in those traditional arenas.

"We are ahead on social media and ahead by a length on face-to-face conversations," he insists, describing his tactics in language that suddenly sounds eerily familiar. "It is about conversion through conversation."

Yes people – as he calls them – are trained to orchestrate friendly chats aimed at nudging their mates a few points up a 10-point scale of commitment, with 10 being the mark of a true believer: "Somebody who is three becomes five, becomes seven, becomes 10."

… In the East End of Glasgow, some people feel they have nothing to lose. Craig, a job-seeking former delivery man in his forties whom we meet on the empty evening streets, says: "They tell us, 'You'll not keep the pound, you'll not get into Europe, you can't have this and you can't have that if you go.' It's rubbish, man. Scare tactics, plain and simple. You'll not scare us!"

Craig is from a Labour family, but does not feel Ed Miliband is doing much for him. Disenchanted Labour supporters are a second good reason why Yes Scotland has picked up steam.

Craig's point is well taken: "You'll not keep the pound, you'll not get into Europe …" He's expressed the dialectic as it has been orchestrated.

The man behind the vote, Alex Salmond, is Scotland's most formidable politician. But he also has close ties to London's City, and the vote has thus been carefully positioned far in advance.

If the Scots wanted REAL independence, they could vote to create a currency backed by gold and the nation's prosperity would soar. Yes, there are plenty of alternatives. But that is not how the election is being positioned. Either Scotland stays in Britain or it seeks safe harbor by joining the euro and moving closer to Europe.

Is a "yes" vote actually being orchestrated out of London?

Is it possible that the City itself – fearful of a referendum that removes Britain from the EU – has decided to make a proactive strike by orchestrating a Scottish secession that will drive the country closer to the EU and potentially toward adoption of the euro?

Our logic revolves around our often-stated belief that the City itself is behind the European Union and the euro. The international banking crowd never saw a union that it didn't want to retain and eventually enlarge.

London's bankers may act like they are anti-EU, but at the top, the project has the full support of the City's most powerful members. That's our hypothesis anyway …

In the context of this scenario, Britain might vote to leave the EU, but one of its member states would provide a countervailing influence.

If this takes place, we would certainly count it as a kind of directed history. The Scottish drift toward the euro would seem perfectly reasonable – even though behind the scenes it was orchestrated as a kind of damage control. Britain goes out of the EU, and Scotland goes in (to the euro anyway) …

If this is the case, the vote may be more important to the City than to Scotland itself. Irony, eh?