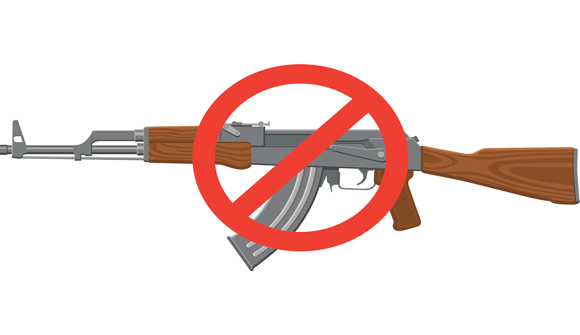 Following the horrific shooting at Sandy Hook Elementary, measures were passed both in Connecticut and New York that put some restrictions on gun ownership. These measures placed a ban on semi-automatic weapons bearing certain military assault weapon features and the possession of high capacity magazines. This seems fairly unobjectionable, but groups of gun rights advocates still attempted to overturn these prohibitions. The 2nd U.S. Circuit Court of Appeals voted on Oct. 19 to uphold the measures by and large. They made the right decision. – Daily Titan

Dominant Social Theme: Guns are bad for people and other living things.

Free-Market Analysis: The Daily Titan is a student newspaper, but we've deliberately led with its summary of the latest court decision regarding guns (and Sandy Hook) because it provides us with a variety of anti-gun memes that appear in various guises with predictable regularity.

The passion, generally, that gun-control issues arouse makes it an extremely contentious issue to resolve.

Here, from various parts of the article:

Guns with the magazines and firing capacities that exist today did not exist when the Constitution was written. Yet, when the slightest limitation is proposed for gun ownership, millions cry "unconstitutional."

… After all "We the People," originally meant "We the white, property-owning males." Failure to recognize these basic, contextual facts is detrimental to our society.

Several arms and ammunition sellers, including Beikirch Ammunition Corporation and Blueline Tactical Supply, were among the plaintiffs, according to the court summary. This blatantly reveals the corruption and ulterior motives that get tangled up into the debate.

Why should differences in firepower affect the validity of the Second Amendment (though in fact some courts have recognized they do)? And why should the skin color of Founding Fathers have an impact on the debate?

Finally, why shouldn't those people whose livelihood is affected by court decisions have a right to become involved in judicial actions? Does it really reveal "corruption and ulterior motives"?

This is the sort of rhetoric that clouds gun control discussions – and creates difficulties in coming to terms with underlying issues.

As recently as 2008, the Supreme Court decided that the amendment protects an individual right to possess and carry firearms (District of Columbia v. Heller). But now parts of this decision are seemingly overturned by this Circuit Court ruling.

The strong emotions the gun control debate arouses are not restricted to gun control advocates, of course. In its reporting of the decision, Intellihub warned, "It is here: Court ruling paves way for mass confiscation of firearms in America."

The article continued as follows:

In a ruling that directly paves the way for mass confiscation of firearms in America, the U.S. Court of Appeals for the Second Circuit, in a much-anticipated decision, has upheld the constitutionality of the New York SAFE Act of 2013. Shockingly, the court ruled that nearly all of the most drastic gun control law in the history of the United States did not violate the Second Amendment and is therefore constitutional.

That's right, a law passed in the wake of Sandy Hook that included and paved the way for confiscation of millions of legally purchased firearms has been ruled "constitutional" with proponents already calling for a similar law to be enacted at the federal level.

The article then points out that a planned Supreme Court decision striking down this latest decision is not at all assured. Assuming the decision stands, "nothing prevents Congress from summarily outlawing tens of millions of firearms overnight."

The Second Circuit's decision leaves the Second Amendment in its gravest peril ever. Second Amendment rights are now hanging by a one-vote margin in the same Supreme Court that upheld Obamacare and declared a national right to gay marriage.

A recent article by Thomas Sowell, "The 'Gun Control' Farce," reveals considerable irritation with what he considers to be the illogical "zealotry" of gun control advocates.

The zealotry of gun control advocates might make some sense if they had any serious evidence that more restrictive gun control laws actually reduce gun crimes. But they seldom even discuss the issue in terms of empirical evidence.

Saving lives is serious business. But claiming to be saving lives and refusing to deal with evidence is a farce. Nor is the Second Amendment or the National Rifle Association the real issue, despite how much the media and the intelligentsia focus on them.

But if hard evidence shows that restrictions on gun ownership lead to more gun crimes, rather than less, then the National Rifle Association's opposition to those restrictions makes sense, independently of the Second Amendment.

Sowell then comments on the "hard evidence" that seems to show restricting guns does not increase citizen safety but may retard it.

From our point of view, the most persuasive argument against gun control is perhaps the simplest of all; According to The Black Book of Communism, some 100 million people died at the hands of various governments in the 20th century alone.

The US certainly seems headed in the wrong direction. Perhaps this is why, according to the latest government statistics, US citizens renouncing their citizenships have reached an all-time high. That's a troubling trend.