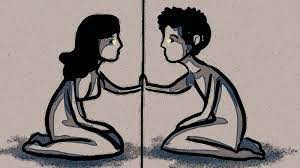 “‘I ate civilization. It poisoned me; I was defiled. And then,’ he added in a lower tone, ‘I ate my own wickedness.'”

As Aldous Huxley said it would be, the Brave New World is foisted upon us.

Enter “sissy hypno“: a fascinating and eerie steampunk-style mass-scale psychosocial “movement” (for lack of a better word) that encourages men to renounce their masculine identity and become – as the term is used in the LGBTQ4GF150+ community – a “sissy.” 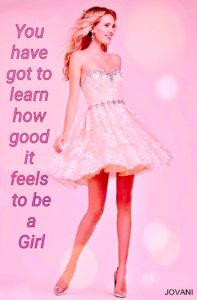 The term “sissy” has a long colloquial use dating back to the 1890s. In its original conception (and the way it was almost always used until the 21st century), it meant “a person (usually male) regarded as effeminate or cowardly.” Essentially, it was a flippant term of derision and nothing more.

In the context that the term “sissy” is currently used, the meaning is shifted subtly in a more sadomasochistic direction:

“a process where submissive men learn to take on traditionally female roles. The submissive, known as a sissy, learns to adopt ultra-feminine behaviors and perform feminine activities under the guidance of his Dominant partner.”

The long form of “sissy hypno” is “sissfication hypnosis,” with the goal being to indoctrinate male viewers into new roles as sissies while leaving old gender identities and practices behind — hence the “hypnosis” portion of the term.

The central idea is that you, the target of the meme — a (probably white) 20-something, frustrated, nominally heterosexual male – have always been a woman deep inside. The issue is that, until sissy hypno came along, you had no idea of your true nature. 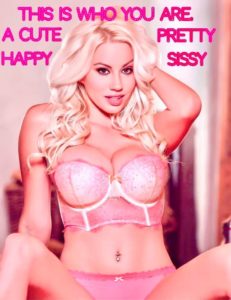 Since the foundational tenant of the “sissy” lifestyle is that you are and have always been a woman but lacked the capacity to express yourself accordingly, one of the major recurring themes in the sissy community is the “release” from the burden of having to pretend

Masculinity is treated as a burden; becoming a sissy, on the other hand, is liberating. In light of the skyrocketing suicide rates and mental health disorders among young adults in the US, this dichotomization of gender roles offering promised relief from the burdens of life may be one of the most effective appeals that the sissy hypno “movement”. 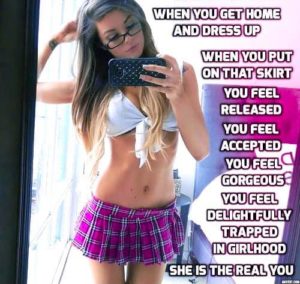 According to Jane Robbins, one of the central attractions of any cult is that “anxiety, uncertainty, and self-doubt can be reduced by adopting the concepts put forth by the group.”

In terms of coming around to their full gender transition, the architects of sissy hypno understand the natural hesitancy that their targets are prone to. Accordingly, they have apparently predicted and factored in pushback against their manipulation into their propaganda stew.

The sissy hypno meme offerings are consistently sprinkled with reminders – and, just as often, commands – that the heterosexual lifestyle is a thing of the past. Maybe you aren’t sure that you want to transition, but you have to – and the deeper you go, the harder it will be to “come back” to a normal lifestyle.

Male-to-female HRT causes alterations to physiology that cannot be undone. Gender transition regret is a growing mental health burden, the effects of which will reverberate throughout society for decades at a minimum. 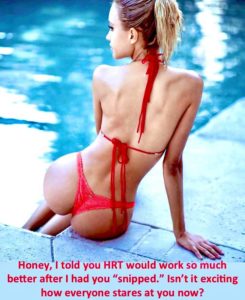 Social media has, in effect, turbocharged the dissemination of slick agitprop to the masses. Whether the social engineers in Silicon Valley or their earliest bankrollers could have predicted the awesome power they would soon hold is irrelevant – in any case, they now hold the keys to our collective psyches.

Generally speaking, with history as a guide, those keys are ripe for manipulation, gaslighting, and myriad other forms of abuse.