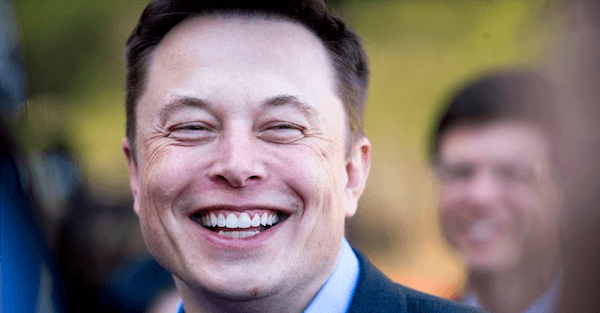 Elon Musk didn’t have a care in the world last week as he hilariously mocked questions in a live interview with the Wall Street Journal.

The Journal’s reporter had essentially prepared a number of softball questions designed for Elon to praise the US government’s new ‘Build Back Better’ bill.

If you haven’t heard, the legislation contains a number of provisions which should greatly benefit Tesla, including major subsidies to build electric vehicle charging stations across the US.

But Elon had no interest in the puff piece.

“Unnecessary,” he interjected when the reporter started to ask what he thought of the subsidies.

“Do we need support for gas stations? We don’t. So there’s no need for support for a charging network. I’d delete it. Delete.”

This left the reporter flummoxed… how could Elon possibly not be excited about “free” government money that would support his business?

But Elon’s point seemed completely lost on her.

“If we don’t cut government spending, something really bad is going to happen. This is crazy. Our spending is so far in excess of revenue its insane. You could zero out all billionaires in the country… you still wouldn’t solve the deficit.”

So the reporter said, well, let’s change the subject.

Elon then sounded-off on issues like the rise of China and corresponding decline of the US. He also called declining birth rates “one of the biggest risks to civilization.”

But another more ‘traditional’ billionaire is also on board with this ethos.

He has been very vocal over the past several years about the pathetic state of US government finances, and obvious shift of wealth and power away from the US.

For example, last year he published an article which asks, why in the world would you own bonds?

Dalio points out that, buying US Treasury bonds (which is tantamount to loaning money to the federal government) USED TO BE a good investment, back when America was actually creditworthy.

But now when you buy bonds, you’re loaning money to the largest debtor that has ever existed in the history of the world… and in exchange you are receiving return that is well below the rate of inflation.

Dalio points out that people still value US government bonds because of “the ‘exorbitant privilege’ the US has had being the world’s leading reserve currency, which has allowed the US to overborrow for decades.”

But there are signs of the changing global wealth and power dynamic, as international investors are starting to shift to Chinese bonds.

That’s a major theme in Dalio’s new book, Principles for Dealing with the Changing World Order: Why Nations Succeed and Fail.

Dalio has made it his life’s work to understand debt and political cycles, in order to foresee risks that others miss, and better serve his clients.

He makes a lot of the same assertions that Elon makes; for example, Dalio explains that economies, governments, and civilizations move in cycles. And in simple terms, there are good parts of the cycle, and there are bad parts.

The good part of the cycle is characterized by peace, prosperity, and production. The bad part includes recession, depression, inflation, social conflict, and war.

Then the 1950s and early 1960s were good again. The late 1960s through the early 1980s were bad, marked by extreme social turmoil, geopolitical conflict, and stagflation.

The mid 1990s through the mid 2010s were generally quite good, especially from an economic perspective.

Now we seem to be in transition once again to a bad part of the cycle— social conflict, inflation, geopolitical tensions, and more.

Dalio’s book, which I highly recommend reading, lays out a very clear case of what is happening right now, and why.

His ideas are quite similar to much of what we have been writing about for so long here at Sovereign Man.

And Dalio has suggested some of the same solutions that we’ve discussed in these pages.

First, education is critical: it’s imperative to understand how these cycles work in order to be prepared for what’s coming.

Mindset is also key: There’s no reason to panic. The world is not coming to an end. But it IS changing. Rapidly.

Dalio writes that the transition from the good part of the cycle to the bad part are rarely smooth or peaceful. And they often coincide with a shift of wealth and power.

And the United States, while still strong, is clearly losing its wealth and power thanks to its historical debt, massive deficits, an utter embarrassment in Afghanistan, the rise of Marxism, ridiculous ‘woke’ national priorities, etc.

For these reasons, it makes sense to take rational steps to mitigate these long-term risks.

Investors frequently diversify their portfolios to reduce risk; they spread their assets around different companies, different sectors, and even different asset classes, in order to ensure that they’re not over-exposed to a single set of risks.

Similarly, our approach at Sovereign Man is to diversify your geographic/country risk as well.

Give serious thought to the long-term risks where you live. Will your home country experience social conflict, inflation, capital controls, or war?

The good news is that not all countries are going through the same part of their cycles. By taking a global view, you can avoid the worst of the economic shifts that Elon Musk and Ray Dalio are talking about… and what we’ve been writing about for years at Sovereign Man.

This could mean securing foreign citizenship or residency, to ensure you always have another place to go, just in case you ever need the option.

It could mean using alternative assets like crypto or precious metals as a hedge against inflation. Or investing internationally to reduce exposure to your home currency.

The key idea is— don’t put all of your eggs in one basket… especially when that basket is the largest debtor in world history that’s blindly racing as fast as it can into a fiscal abyss.