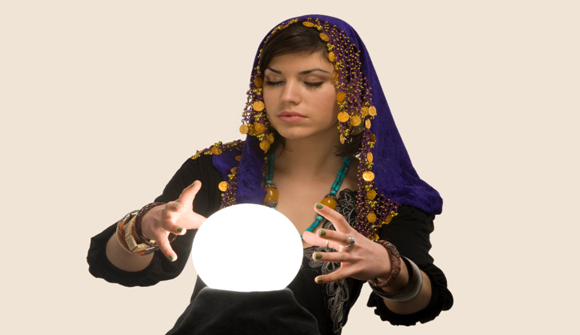 Dominant Social Theme: Our future is written in the stars.

Free-Market Analysis: Ganesha has inspired us to make predictions for 2015. Our predictions focus on the trends we've covered this year.

We begin with central banking, which is the engine driving most of the themes we observe. Central bankers will surely print money at an accelerated rate in 2015. Japan, Europe and the US will face continued monetary debasement. The European Union will soak up additional billions from the quantitative easing that Mario Draghi is determined to implement.

The result is not going to be a gentle one. We can't see the Germans happily acquiescing to the kind of debasement they've been dreading since the advent of the euro. Additionally, the Greek insolvency seems to be blowing up again – and this time there's a significant chance that the end game could include a Grexit from the euro or the EU.

The combination of price inflation and political instability should make Europe an interesting place to live in 2015. It is quite possible that Greece's continued instability shall further shake the economies of Southern Europe, including Spain, France and Portugal.

Any kind of major instability in Europe should have an impact on market directions. In this case, we're looking at lower equity prices along with depressed sovereign treasuries.

Metals might benefit from European instability, especially gold, which continues to be under sustained attack and broke through significant levels of support on the down side, trading under US$1200 against the dollar.

A depreciating dollar would generate further uncertainty about the greenback's future as the world's reserve currency. Russia, China, Brazil and even India (the BRICs) are already hoping for an alternative, so significant chaos in major Western countries would probably exacerbate the dollar's plight.

From Russia's point of view, anything that weakens the dollar provides at least a little relief to the ruble – strategically if not monetarily.

A great many otherwise wise analysts seem to see the Ukraine face-off as a precursor to what could be a much larger war. But both current leaders – Obama and Putin – are cautious men in their own ways. It's hard to visualize either of them pressing the proverbial button.

Thus, the stage is set for continued tension and turmoil in Ukraine and surrounding regions. This will surely have continued commodity impacts as we have seen, especially when it comes to the price of oil.

It seems fairly clear at this point that the US was behind the plunging price of oil. This is fairly easy to do if the world's biggest producer of oil – Saudi Arabia – is also one of your closest allies. The Saudis are continuing to produce a high volume of oil even though lowered demand has dropped the price significantly.

It's very possible that we could see lower oil prices extend in 2015, as the US and the West generally seek to pressure Putin to disengage from Ukraine.

Putin is now preoccupied with Ukraine but other hot spots persist anyway … especially in ally Syria, which continues to fight various shadowy enemies known in aggregate as IS – the Islamic State.

By pressuring Putin, the US and its allies can strip Syria of its strongest backer in the Middle East. And if Syria does by any chance fall to IS, the next logical target is Iran.

Bear in mind, none of this predictive. We're simply speculating, but if the West can clear the proverbial board in the Middle East, the revised religious architecture would be stunning indeed.

The US and its allies would have succeeded in creating a radical Sunni caliphate stretching through the Middle East and into Africa. It is difficult to avoid the suspicion that NATO is pursuing this strategy to create a kind of religious Cold War that can give the West's manifold, linked military-industrial complexes permanent and lucrative employment,

There are other speculative elements even beyond what we have mentioned … but after a point speculation turns into mere guesses. Are top men aiming at launching neo-Crusades in the Middle East? Is the increased tension supposed to result in the creation of Jerusalem as an international capitol city of some sort?

Our best "guess" is that there will indeed be a ratcheting up in military tensions around the world. This will add volatility to one of our favorite memes – the Wall Street Party – which we have predicted will go international in a big way due to further global currency stimulation.

The West's asset bubbles are inflating, especially in the US, and this cannot end happily. There are those, of course, already predicting a powerful deflationary depression. But if there is monetary and price deflation it will only come, in our view, once the current asset bubbles collapse.

We're not prepared to place a timeline on any of this. Stocks could continue to move up for most or all of next year, alongside inflation and continued military tension in various "hot spots."

The Wall Street Party could last even longer than that, radically reshaping finance and industry around the world. But our best guess is that there will be significant changes after a collapse – and we do mean significant.

Good luck in 2015. As of the moment we are not anticipating a sudden deflationary depression. Rather, if the pattern holds, there will be more military tensions, more wars and skirmishes, more talk of China's industrial influence around the world dimming that of the US.

There will be additional price inflation, additional turmoil in Europe and further turmoil in the US as well, which is seemingly being undermined by its own ruling class. In the US, apparently, the idea is to use immigration and various kinds of drug-running tensions to draw Mexico and the US closer together in a web of treaties and industrial commonality.

This is the world's larger pattern generally. Examine where asset inflation and military standoffs are taking us and you will probably come to a conclusion similar to ours: The West´s living standards are being reduced while the BRICs' are rising.

At some point, the world's largest economies will become homogenous indeed, at least from the standpoint of global governance.