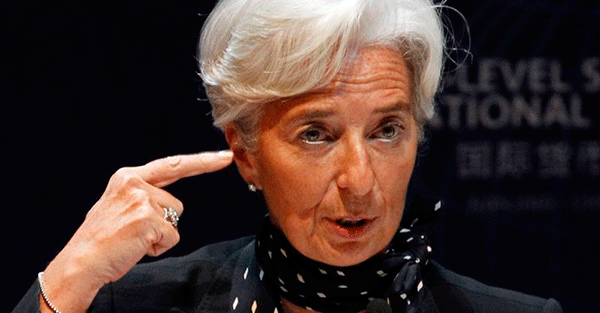 STAFF NEWS & ANALYSIS
Speculation: Lagarde Is Out and India’s Rajan Is In
By Daily Bell Staff - June 22, 2016

The head of the United Nations’ International Monetary Fund, Christine Lagarde, is facing charges in France for embezzlement. If found guilty, she could go to prison for ten years. – RebelMedia

This has been little-reported despite its significance: The head of the IMF is going on trial over a £315million payment to businessman Bernard Tapie in 2008.

According to an insightful commenter who wrote to us last night, the Lagarde trial is perhaps only part of a larger realignment due to take place over the next months.

Before her IMF appointment and in another role, Christine Lagarde provided Tapie with a gigantic check in compensation for claims that Credit Lyonnais had defrauded him over the sale of sportswear company Adidas. On 17 December 2015, she was ordered to stand trial for alleged negligence regarding the Tapie arbitration approval.

The commenter wrote to us regarding our RECENT ARTICLE entitled, “India Sheds Central Banker Rajan, Revs Up Monetary Printing Presses.”

This is a pre-planned decision. Rajan is being replaced by a printer so that blame for the collapsing India economy during this next leg down will be directed towards the [the money printing itself]. Meanwhile, Rajan is taking a nice, relaxing vacation while awaiting his next pre-planned appointment. He and the current Chinese central banker are slated to “lead” the “reform” … after Lagarde is taken out.

If the schedule holds as planned, Lagarde should be forced out beginning this fall. Look for a September-ish boot … Zhou Xiaochuan will replace Lagarde at the IMF and the new “multipolar” and “multilateral” (the globalists keywords in the media, not mine) financial system will be unveiled. Look for that to go down October 7th-9th 2016 at the annual IMF meeting if the current schedule is not delayed.

While this is a startling scenario, we don’t discount it. For one thing, this is a Jubilee year and the globalist clique likes to use certain dates to implement various strategic advances.

For another, it’s fairly obvious that the pace of globalism has picked up. From the Panama Papers to various corporatist treaties being developed (TPIP,  etc.), the move toward international finance, undergirded by corporate power, is growing rapidly.

The idea that all of this is in a sense scripted and “scheduled” is a startling one. But, yes, events do have a certain scripted quality about them these days.

The greater plan is never deviated from however. And this summer/fall is forecast to be VERY HOT and WILD. In the near term the West shall be destroyed while all assets (and power) are being transferred to the East and the UN/IMF/WB/BIS will be the new centralized structure rising from those ashes.

Conclusion: Well … the yuan is scheduled to be fully integrated into the IMF’s SDR currency in the fall. And there’s no reason why there couldn’t be changes at powerful international financial agencies as well. This could be the year that globalism finally flowers.