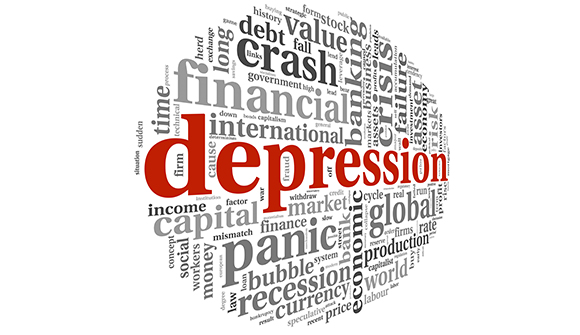 BIS fears fresh bank crisis from global bond spike Soaring bond yields across the world threaten trillion of dollars in losses for investors and a fresh financial crisis unless banks are braced for the shock, the Bank Settlements has warned … Marcus Nunes from the Fundação Getúlio Vargas in São Paulo said the report "reeks of Austrianism", referring to the hard-line view of the Austrian School that debt busts lead should be allowed to run their course. Prof Nunes fears a repeat of 1937 when premature tightening aborted recovery from the depression. – UK Telegraph

Dominant Social Theme: With Ate by his side come hot from hell, Shall in these confines with a monarch's voice Cry 'Havoc,' and let slip the dogs of war …

Free-Market Analysis: There is no avoiding what the Bank for International Settlements has just demanded. The top men at that august institution are demanding a global depression.

And just to ensure that people especially in the West are thoroughly confused as they slip into starvation and despair, Austrian economics has been brought back into the argument – as we can see from the above excerpt.

The idea, marvelously literate and mercilessly dispassionate, is that when one prints money – as one can in the modern era – to prop up failing institutions, one only prolongs the pain of an economic slump.

This is absolutely true but to blame "Austrianism" for this – and Austrianism is a term of contempt, as the correct phrase is Austrian economics – is entirely disingenuous. Just because one understands the reality of economics doesn't mean one is supportive of the kind of ruin that the BIS now demands.

Free-market proponents didn't cause this disaster. Central bankers did, with their insistence on price fixing and monetary expansion. Determined to control all the elements of globalism, and keep them in place, they printed tens of trillions to stop a meltdown that must inevitably occur. By stretching it out, they prolong the agony of unemployment and economic dysfunction for billions.

The markets suffered a global sell-off of assets, including bonds, following a signal from the US Federal Reserve that QE could end by mid-2014 … The Swiss-based institution said losses on US Treasury securities alone will reach $1 trillion if average yields rise by 300 basis points, with even greater damage in a string of range from 15pc to 35pc of GDP in France, Italy, Japan, and the UK.

"Such a big upward move can happen relatively fast," said the BIS in its annual report, citing 1994 … "Someone must ultimately hold the interest rate risk. As foreign and domestic banks would be among those experiencing the losses, interest rate increases pose risks to the stability not executed with great care."

The warning comes after US Federal Reserve set off the most dramatic spike in US borrowing costs for over a decade last week with talk of early exit from quantitative easing through the global system. The yield on 10-year Treasuries has jumped 80 basis points since the Fed began to talk tough two months ago, closing at 2.51pc on Friday. The side-effect has been a run on emerging markets, a reversal of hot-money inflows into China, and fresh debt jitters in Portugal, Spain, and Italy.

Nomura said the US yield cracks in Europe once again" and short-circuit the US housing recovery. The BIS, the lair of central bankers, said authorities must press ahead with monetary tightening regardless of bond worries, warning that QE and zero rates are already doing more they go on, the greater the dangers. "Central banks cannot do more without compounding the risks they have already created," it said in what amounts to an full assault on the credibility of ultra-stimulus policies.

Describing monetary policy as "very accommodative globally" , it warned that the "cost-benefit balance is inexorably becoming less and less favourable." The BIS appeared call for combined monetary and fiscal tightening, prompting angry warnings from economists around the world that this risks a second leg of the crisis and "It is a resurgence of extreme 1930s liquidationism. If applied this would do grave damage to the world economy," he said.

… Central banks cannot ensure the sustainability of fiscal finances," it said. The emergencies policies have bought time for governments to put their budgets in order and tackle the deeper crisis of falling productivity, but this has been squandered. The reforms needed to clear out dead wood and unleash fresh energy. Productivity growth in the rich states has dropped from 1.8pc between 1980-2000, to 1.3pc from 2001-2007, has turned negative in Britain and Italy.

"Extending monetary stimulus is taking the pressure off those who need to act. In the end, only a forceful programme of repair and reform will return economies to strong and Piling on the pressure, the BIS said to call for draconian fiscal tightening to avert a future debt crisis across the big industrial economies, with Britain needing to slash its `primary GDP to meet ageing costs. "Public debt in most advanced economies has reached unprecedented levels in peacetime.

Even worse, official debt statistics understate the true scale of fiscal problems. The face a solvency constraint is a dangerous illusion. Bond investors can and do punish governments hard and fast." "Governments must redouble their efforts to ensure that their fiscal trajectories are sustainable. Growth will simply not be high enough on its own. Postponing the pain carries under stress – which is the current situation in a number of countries in southern Europe."

The call for double-barrelled fiscal and monetary contraction is remarkable, challenging the widely-held view that easy money is crucial to smooth the way for budget cuts and The BIS is in stark conflict with the International Monetary Fund and most Anglo-Saxon, French, and many Asian economists, as well as the team of premier Shinzo Abe in Japan. bitter dispute over the thrust of global economic policy at a crucial moment. Critics say the BIS is discrediting monetary remedies before it is clear whether the West is safely out of the woods.

It may now be much harder to push through fresh QE if it the gun with talk of early bond tapering. Scott Sumner from Bentley University said the BIS is wrong to argue that delaying exit from QE and zero rates is itself dangerous. The historical record from the US in 1937, is that acting too soon can lead to a serious economic relapse.

When the US did delay in 1951, the damage was minor and easily contained. Prof Sumner warned that Europe risks following Japan into a deflationary slump if it takes the advice of the BIS and persists with its current contraction policies.

Sorry to quote at length but this is a remarkable article and states clearly – remorselessly – what the top thinkers at the BIS seem to have in mind. Having watched central banking create a global crisis no less extreme than the Great Depression, they now seek to exacerbate it.

And just to make sure that no one misunderstands what is going on, they have apparently coordinated the Chinese tightening with Ben Bernanke's statement about a "taper" of current stimulus.

And why does the BIS call for a global depression? We'll leave that up for you to decide, dear reader. But what's going on today reminds us of our suspicions that the Great Depression was similarly manipulated and for similar reasons.

Chaos is ever a tool of globalism.

"Blood and destruction shall be so in use / And dreadful objects so familiar / That mothers shall but smile when they behold / Their infants quarter'd with the hands of war; / All pity choked with custom of fell deeds: / And Caesar's spirit, ranging for revenge, / With Ate by his side come hot from hell, / Shall in these confines with a monarch's voice / Cry 'Havoc,' and let slip the dogs of war; / That this foul deed shall smell above the earth / With carrion men, groaning for burial." – Shakespeare