Adding a new wrinkle to the phrase, "I'm mad as hell, and I'm not taking it anymore," several California sheriffs, as well as one from Oregon, say they aren't cow-towing to the federal leviathan anymore. Last month, at the Yreka fairgrounds in northern California, the sheriffs – who, of course, are elected by the people – gathered with a large group to discuss what to do about Big Brother and his consistent meddling in state and local affairs. Speaking of the federal bureaucracy, Plumas County (California) Sheriff Greg Hagwood declared, "A giant has been awakened, and they didn't count on that." – Natural News

Dominant Social Theme: The Feds have the answers and anyone else is racist or a crook.

Free-Market Analysis: Stewart Rhodes appeared recently on the Alex Jones Infowars channel to explain the growing resistance to unconstitutional Fedgov activities. In the process, he pointed out that the modern-day "printing press" – the Internet – is providing people with information they simply hadn't had access to before.

This is a fundamental meme that we have been expressing for nearly a decade now and modern events seem to be bearing it out. We have labeled the ongoing awakening that is taking place the "Internet Reformation."

It is occurring in front of our eyes, as Rhodes realizes and explains. The power elite virtually controlled the flow of information in the 20th century and in the 21st they've lost this ability. They have lost their information monopoly thanks to the Internet. This is a devastating blow.

The elites did not merely control history in the 20th century; they MADE it. What we believe we've discovered is that "directed history" was prevalent in the 20th century. There are simply too many inexplicable occurrences. What were the REAL causes of World War 1? Why did the New York Fed deliberately overprint money during the Roaring 20s? Why did the West accept Stalin's demands at Yalta, thus setting up yet ANOTHER war (the so-called Cold War).

Yes, it seems everything from the Great Depression to the "Great War" was somehow manipulated by the power elite of the era, especially once they were able to set up central banks around the world and had access to the enormous amounts of funds they needed. The idea was to create first chaos and then "order" – a one-world order.

Out of every war came a renewed emphasis on globalism. Out of every recession and depression came expanded powers for the IMF, World Bank and UN. But now in our view this era is coming to an end. Central banks are under attack; the Fed is having a great deal of trouble defending itself; the UN is not the force it once was. Most importantly, the elite's dominant social themes are under attack.

These fear-based promotions are simply not working as planned. Global warming is challenged; central banking itself is seen as ineffective and even part of the economic ruin under which the West currently labors; even the European Union is in increasing danger of splitting up as the euro continues to founder and fail.

Of course, one can argue that the dissolution of these memes will only create MORE chaos, which is what the Anglosphere power elite seeks. But we don't believe this is true. We think the primary plan is always to strengthen globalist institutions. To create chaos out of their downfall is a distinctly SECONDARY preference.

A defeat is a defeat. On so many fronts, in our view, globalism is foundering. The DOHA trade talks have proven unfeasible in many ways; the UN itself only makes news for scandals; there is resistance even to Peak Oil and the "smart-meter" technology it has spawned.

Increasingly, the elites are falling back on intimidation and brute force. And yet in the recent past they have always resisted option as the odds are not good: There are many billions who are NOT elites versus a few who are.

Additionally, many of those who the elites will depend on to enforce their noxious globalist system have begun to become awake themselves. Chief among them is Stewart Rhodes. We interviewed him about his increasingly influential organization, the Oath Keepers. You can see the interview here:

E. Stewart Rhodes is the founder and President of the growing, national non-profit organization Oath Keepers. The group supports members (current and former U.S. military and law enforcement) in efforts to uphold the Constitution of the United States should they be ordered to violate it. The Oath Keepers' motto is "Not On Our Watch!" Both sides of his family have a long tradition of military service. Nearly all of his uncles on both sides of the family served in the Army or Marine Corps during WWII, Korea, and Vietnam, and his father served as a Marine. After the Army, Stewart graduated Summa Cum Laude from the University of Nevada, Las Vegas, where his honor thesis focused on the political theory of James Madison. After college he worked on Rep. Ron Paul's (R, TX) DC staff. Stewart graduated from Yale Law School in 2004, where his paper, "Solving the Puzzle of Enemy Combatant Status" won Yale's Judge William E. Miller Prize for best paper on the Bill of Rights.

Stewart Rhodes is helping to spark a revolution in the thinking of US civil police. All over the country, sheriffs and those who enforce local laws are beginning to understand the difference between federal and state law enforcement. Here is an excerpt from an article posted at Natural News (see excerpt at beginning of this article) and also placed beneath the YouTube version of the Rhodes/Infowars interview:

Last month, at the Yreka fairgrounds in northern California, the sheriffs – who, of course, are elected by the people – gathered with a large group to discuss what to do about Big Brother and his consistent meddling in state and local affairs. Speaking of the federal bureaucracy, Plumas County (California) Sheriff Greg Hagwood declared, "A giant has been awakened, and they didn't count on that."

And here's a telling quote: "I had spent a good part of my life enforcing the penal code, but not understanding my oath of office," Sheriff Dean Wilson of Del Norte (Sacramento) County told the group. "I was ignorant and naive, but now I know of the assault against our people by the federal government," he said, receiving some of the loudest and longest applause of the gathering. 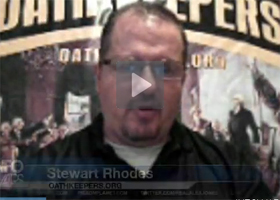