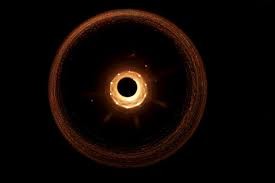 As the snake devours its own tail, SJW ideology reaps its karma.

The façade is crumbling because it lacks any foundation. The SJW house — built on weird, self-contradictory, incoherent academic dogma — victimizes itself with its own inertia.

Such ideologically-driven social engineering endeavors fail, on a long enough timeline, without exception. The principal cause is that they are not rooted in material reality. Nor do they justify themselves. Nor are their abstract theories sufficiently tested in real-world conditions.

The SJW phenomenon went supernova circa 2014, and is now in the process of imploding into a black hole. The star that burns twice as bright, as the expression goes, burns half as long. The quickening is palpable.

No previously untouchable protected minority – not Anne Frank nor the diverse pale-skin LGBTQ+++© sexual minorities – is immune from the SJW cannibalism. 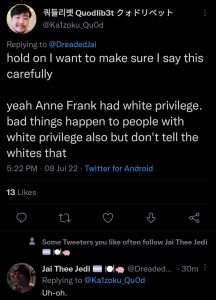 Similar in function to the military-industrial complex, SJW ideology depends on the continual advent of new enemies to maintain its vitality.

The framing of the white heterosexual, Christian man as the devil is now passé. That horse has been beaten to death, and no longer satisfies the SJW bloodlust. The mob requires newer adversaries in the out-group to be hated at ever-greater intensities.

The absurdity accelerates towards the point that, in the near future, the only “marginalized” voice deemed worthy of consideration will be that of an ultra-intersectional BIPOC, genderqueer, non-binary, neurodivergent, disabled, non-binary transgender lesbian furry.

The woman below in blue lipstick and some sort of Kentucky Derby/Harry Potter hat with a matching doo rag (both an aesthetic win and a sure sign of mental stability) explains. White women don’t get to have opinions about the recent Roe vs. Wade overturn.

White people are not allowed to talk about the Supreme Court ruling and must only listen to BIPOC women pic.twitter.com/dkjBpp5fC3

The delicious irony is that baby-boomer white women in liberal arts colleges — products of the 60s counterculture in which abortion rights were front and center — singlehandedly drove the development of the ideology that has now turned on them.

And now they can’t talk about abortion. 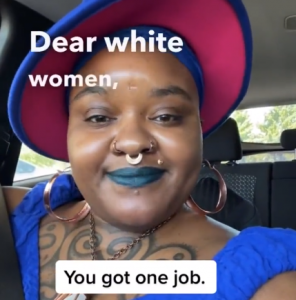 Eventually, even the most privileged SJW voice — like the non-binary BIPOC (apparently) bipolar one above — will be silenced for some reason or other. She breathes air – and that’s asphyxiation-phobic against non-breathing individuals or whatever.

At the risk of mixed metaphors, SJW ideology is a rabid animal, lashing out at anything it can, and becoming more degenerate, unrestrained and undisciplined in its violence by the day.

This is the inevitable dead end of an ideology with nothing substantial to support it — no sustaining principles at its core except victimhood as a virtue and the visceral satisfaction that hate of the “oppressor” provides.

The left is an unlikely hodgepodge of blacks, Hispanics (although increasingly not so as they identify less and less with the Democrat Party), other racial groups, women, feminists, transgenders and related gender ideologues, Marxists, academics, religious minorities like Muslims, etc.

In the absence of any real class solidarity or shared economic aims, the bonds that ultimately tie these groups together are merely resistance to the phantom “white patriarchy,” which itself is a conjured specter.

The left, therefore, is, by its nature, weak. Its various divergent elements can be manipulated, reconfigured, or disbanded at will. The left won’t ever seriously threaten the power structure because their constituent parts can simply be pitted against one another at will.

The alliance among the many factions of the left is a ticking timebomb. Their only uniting feature is hatred of their own society based on various identity-based grievances.

The canceler becomes the canceled

YouTuber Ethan Klein, host of h3h3 Productions, earlier this year deleted his old interview with Jordan Peterson in a virtue signaling gesture. He denounced Peterson as “transphobic” based on out-of-context soundbites.

In reply, Peterson sent the following prescient warning to Klein:

“You will be held to higher and higher and soon impossible to maintain ethical standards by the very mob you currently wish to please. Then you will make a mistake, and they will devour you. With glee.”

Mere months later, Klein found himself cancelled for making what, in context, was an obvious joke about bombing an NRA convention. Taken in full context, no reasonable interpretation could be made that it was a literal incitement to violence.

However, his political opponents clipped out a 10-second soundbite, disseminated it without context, and he ended up suspended from YouTube.

Unless you are genuinely a member of the power elite, censorship will always come back to bite you. Promoting of censorship is promotion of your own eventual future silencing.

“Matricide” is the technical term for killing one’s own mother.

The delicious irony is that baby-boomer white women in liberal arts colleges — products of the 60s counterculture in which abortion rights were front and center — singlehandedly drove the development of the ideology that has now turned on them.

And now they can’t talk about abortion, “transgender” men usurping their place in women’s sports, or any of a dozen of sacred cows.

A lesbian bar opened in ultra-progressive Portland and closed no more than a week later, due to its failure to accommodate penis-packing men who self-identified as lesbians. The owners were also accused, of course, of racism and non-compliance with COVID safety measures.

The mob will unleash itself on everyone in due time

The problem with mobs – while they do serve political utility in the short-term (i.e., BLM) – is that they are unruly. Their chaotic energy requires an outlet; like a fire, they consume whatever they can in their immediate reach.

Ideological motivations, to the extent that they were ever really central to begin with, become an afterthought to the mob. The prime directive is to feed.

The beautiful thing is that, because of its totally manufactured, plastic nature, imploding the SJW movement requires exactly zero effort from the opposition.

Kick back and enjoy the implosion of “social justice” – the greatest cultural scourge of the 21st century. The end is nigh. Dance on its grave, in celebration of the demise of the moral obscenity.

Above: Social justice marches inexorably towards its fate