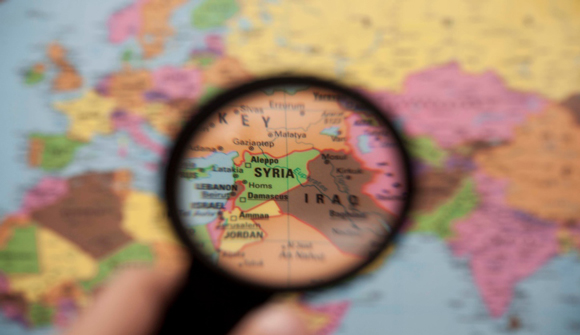 C2 FOR HYBRID WAR: THE MARINES PREPARING FOR COMBAT … Counter-insurgency warfare has been the dominant template dominating U.S military engagements for more than a decade. Joint warfare has been largely defined in terms of the air and naval services supporting the ground forces doing COIN … In a recent article by Francis Tusa, the age of COIN has been decisively replaced by the demands of what he refers to as hybrid warfare, or his version of what the Marines used to call the Three Block War. How much more hybrid can you get than the current situation over Syria? – SLD: Second Line of Defense

Free-Market Analysis: This is indeed an earnest blog, written for personnel involved with military actions. There is an almost palpable delight in the elucidation of various strategies that might be employed in the upcoming Syrian war.

Notice how our excerpt concludes, with the question, "How much more hybrid can you get?" Is this what excites the authors – the genesis of a new Marine battle order, a new way of doing things … a hybrid way?

COIN stands for counter-insurgency operations but COIN is now old-fashioned. Instead, Marines will be returning to a "three-block war" concept (one that will use simultaneous strategies). Here, from Wikipedia:

The Three Block War is a concept described by U.S. Marine General Charles Krulak in the late 1990s to illustrate the complex spectrum of challenges likely to be faced by Marines on the modern battlefield.

In Krulak's example, Marines may be required to conduct full scale military action, peacekeeping operations and humanitarian aid within the space of three contiguous city blocks. The thrust of the concept is that modern militaries must be trained to operate in all three conditions simultaneously …

There are no big socio-political issues presented here, or not that we can see. The US is going to war again in Syria and this article is simply devoted to figuring out how it will be prosecuted.

It's entirely drained of any empathy regarding those who may get trapped by the upcoming war, or become its victims. But of course, that's not its brief. This is not an article – nor it seems a website – where you will find much in the way of contemplation regarding the larger dangers of what the Pentagon is about to do.

It is indeed dangerous to march troops into Syria given the amount of military activity taking place. Of course, we are told that there will only be about 50 troops "on the ground" and these troops are "special ops" that will be involved in "training" not fighting.

Wasn't this the same gambit that launched the Vietnam war? Gradually a few special ops forces morphed into thousands of "boots-on-the-ground," because if you just have a few more troops and munitions – and then a few more and a few more, that elusive victory will be finally gained.

In Vietnam, the US ended up with millions serving, over 58,000 dead and many more grievously wounded. It was an absolutely needless disaster. But at least in Vietnam, the Russians were not "on the ground" as well. As we recently reported, in Syria there is certainly a chance that US troops will confront Russian ones.

The article, like the website, is cold-blooded that way. It's all about the prosecution of the upcoming war not its ghastly ramifications. Yes, reading this article you can sense it's probably been decided.

Over at LewRockwell.com, there's a post from the Russian-based news service RT that adds to the certainty that war – a US shooting war – is being prepared for Syria.

US Needs Boots on the Ground to 'Occupy & Govern' Syrian Territories – Air Force Secretary … Washington needs "boots on the ground" in Syria in addition to its air campaign against ISIS, which is not fruitful despite some progress.

US Air Force secretary has admitted that "ground forces" is a must in order to "occupy" and "govern" parts of Syria. In her comments, Secretary Deborah Lee James stressed the importance of the US-led air campaign, but admitted that airstrikes need to be backed by ground forces.

"Air power is extremely important. It can do a lot but it can't do everything," James said, just two days after Secretary of Defense Ash Carter supported President Obama's "willingness to do more" in terms of US troops on Syrian ground.

"Ultimately it cannot occupy territory and very importantly it cannot govern territory," James told reporters at the Dubai Airshow. "This is where we need to have boots on the ground. We do need to have ground forces in this campaign."

The officials quoted above are clear about what's going on. They're specifically contradicting what's already been put out by the administration and reported around the world. It's as if they don't even care. The US is going to war again and they're not reluctant to state it.

Maybe war is the new US reality. Maybe there's nothing to be concerned about regarding this new Syrian venture – which seems to us more or less a bright new toy for the West's military-industrial complex.

What's even weirder than this nonchalance are the earnest postmortems now being discussed in the mainstream media regarding Libya, Iraq and Afghanistan – all being presented as "failed wars" to one extent or another.

Over and over those involved in igniting these wars come forward to explain that "if we knew then what we know now, we wouldn't have been supportive."

None of it is sincere. That's obvious. Tony Blair is close to getting lynched in Britain for his surreptitious entry into the Iraq war, in which it is said he lied to the British public to involve the nation. But you can bet Britain will sooner or later have "boots on the ground" in Syria if it doesn't already.

Isn't it a kind of shadow play? The media performs its part, reporting that the current escalation is temporary and won't last. Meanwhile the Pentagon and affiliated officials are not even bothering to hide plans for a wider war.

The shadows flicker and then gradually vanish. Now the wall is blank again. Try to divine meaning if you wish but you are wasting your time.

There are those who believe Vladimir Putin has "outsmarted" the Pentagon but we are not of that opinion. Russia was wanted, Russia was needed, and now Russia may have been successfully drawn into the fray. This is not Iraq, this is not Libya, this is not even Afghanistan. This is bigger.

As this evolves (and we would be surprised if it does not), US citizens will be increasingly involved as well with all the bloody, ruinous, inflationary ramifications that such a military operation entails. Please realize what's going on and protect yourself.