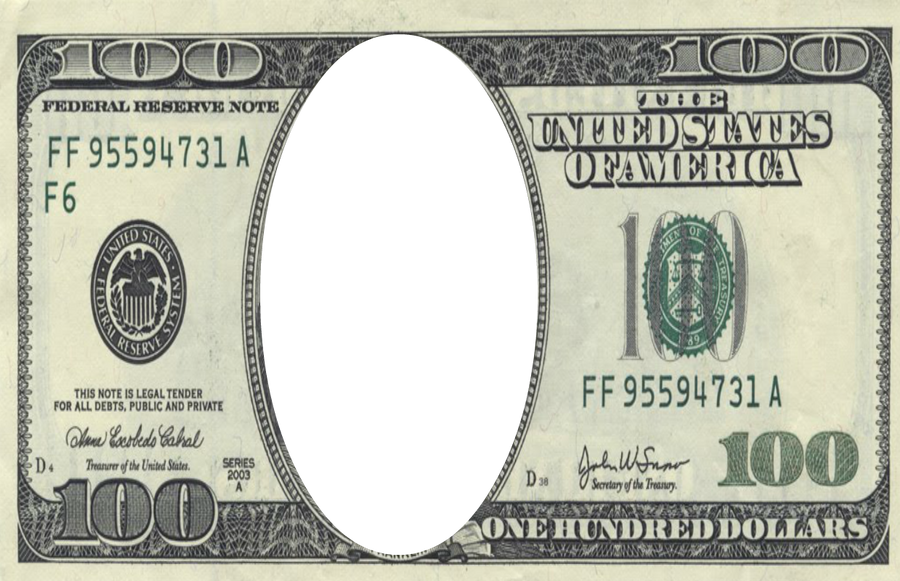 Basic civics recap: the US president, per the Constitution, is the elected executive. That means he is tasked with executing government functions.

He is granted – again, through a theoretically democratic election process – the authority to dictate government activities within the confines of the laws. The legislative branch passes laws; the judicial branch vets them for constitutionality; the executive implements them.

The process, as designed, is not at all vague.

Whenever they’re asked about Federal Reserve or CDC (Centers for Disease Control) policies — government agencies under the umbrella of executive authority — they refuse to give a straight answer on the grounds that the government body in question is “independent.”

“The Federal Reserve is independent. We leave them to make their own policy decisions. We do not get involved in that.”
-Karine Jean-Pierre, WH spokeswoman

The WH has the same hands-off approach to the dictates of the CDC and the shadowy, unelected “experts” who set its policies.

Here’s just one example (you can literally find one from every WH press conference), on the unscientific CDC “travel bans” from abroad last year despite COVID being already widespread in the US:

“Psaki: We are always going to be guided by our North Star — and that is the CDC and our health and medical experts.”
…
Reporter: The Delta variant is already dominant in the U.S., so how does keeping people from foreign countries out, like, protect people in the U.S.?
…
Psaki:  I’m not a doctor or a medical expert.  I think that that would best be posed to a member of the CDC… But I think their decision was made based on the fact that the Delta variant is more transmissible.”
–White House Press Briefing, July 26, 2021

And on the mask mandate issue – even after a federal court struck down the airline mask mandate – Psaki came out and publicly “disagreed” with the court’s decision because, she declared, the CDC is in charge:

“[The Department of Justice] indicated that they would appeal, not just because they think it’s entirely reasonable, of course, to have this additional time to look at it but because they think that for current and future public health crises, we want to preserve that authority for the CDC to have in the future.”
–White House Press Briefing, April 20, 2022

Consequential decisions with life or death implications are theirs, not your (theoretically) elected leaders’!

Who “they” are, exactly, remains unclear, as no one ever actually cites the specific “experts” referenced by name.

“Experts say“= “shut up and obey, ignorant serf. The Science© Gods run the show now. They speak through their conduit, His Grace Anthony Fauci.”

Turning off your mental faculties in blind submission symbolizes your good faith. 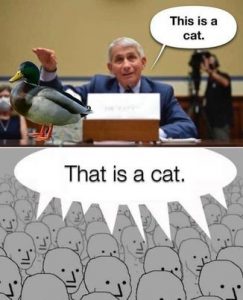 Psaki: ‘Sir Fauci of the independent NIH has decreed this duck is a cat. Jot that down, loyal subjects, for dissemination to the peasants.’ 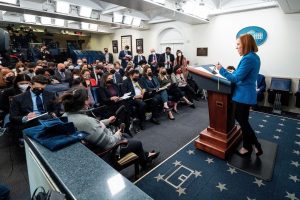 This is fundamental stuff that can’t be lost on even the most distracted ADHD-afflicted voter.

If government agencies act independently — meaning elected leaders have no influence over their operations — then what’s the point of participation in elections?

No one elected the CDC head to do anything. Ditto with DHS Secretary, the DOD Secretary, NIH Director Warlord Fauci, et al.

But it gets deeper. At least those department figureheads are appointed by a theoretically elected leader, so there’s arguably some tangential democratic tether connecting them to the will of the voters.

But what about the multinational Deep State — the real policy setters never discussed in the New York Times or on MSNCB — who linger in the shadows from administration to administration, who set policy priorities passed down from the international level?

“What we are very proud of, is that we penetrate the global cabinets of countries with our WEF Young Global Leaders.”

Top politicians are no longer selected by corrupt in-house Boss Hog-like political machines, which would be bad enough. The nomination process for American leadership is now offshored to a real-life technocratic Dr. Evil, headquartered overseas and adorned in menacing dystopian techno-garb like a Star Trek villain. 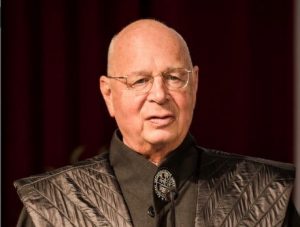 I have long said that Biden is a disposable puppet president. Now, Elon Musk, who has much greater reach, has publicly agreed.

Lots of well-intentioned dissident commentators often repeat the rhetoric that “Biden did this,” “Biden did that.”

Biden doesn’t do anything. The most he can be said to do is to parrot his talking points on cue, but he barely ever makes it out of the basement for that. And when he does fumble through them, he’s barely coherent.

The implication of “Biden did that, what a bad guy” is that driving him out of office will solve anything. It won’t.

Getting rid of Biden, while a plus, will do nothing to cripple and usurp the Deep State power structure.

Once Biden inevitably goes, the technocratic ruling class will simply replace him with a new titular puppet. And the agenda will continue uninterrupted.

Elections at the local level, for instance, to elect county commissioners who make practical decisions daily do count far more than national-level ones.

Decoupling from the multinational corporate technocracy isn’t going to be painless, but it’s doable with the proper paradigm shifts.