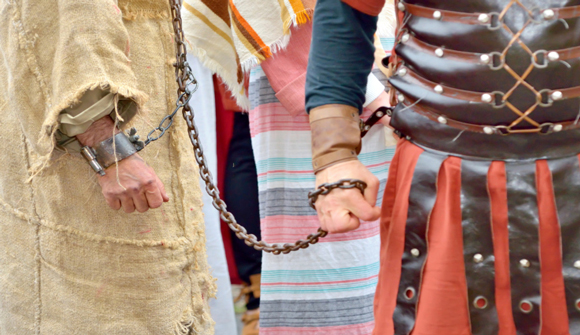 STAFF NEWS & ANALYSIS
The Child That Christmas Forgot: How Would Jesus Fare in the American Police State?
By John W. Whitehead - December 17, 2019

The Christmas story of a baby born in a manger is a familiar one.

The Roman Empire, a police state in its own right, had ordered that a census be conducted. Joseph and his pregnant wife Mary traveled to the little town of Bethlehem so that they could be counted. There being no room for the couple at any of the inns, they stayed in a stable (a barn), where Mary gave birth to a baby boy, Jesus. Warned that the government planned to kill the baby, Jesus’ family fled with him to Egypt until it was safe to return to their native land.

Yet what if Jesus had been born 2,000 years later?

What if, instead of being born into the Roman police state, Jesus had been born at this moment in time? What kind of reception would Jesus and his family be given? Would we recognize the Christ child’s humanity, let alone his divinity? Would we treat him any differently than he was treated by the Roman Empire? If his family were forced to flee violence in their native country and sought refuge and asylum within our borders, what sanctuary would we offer them?

How would Jesus—the baby born in Bethlehem who grew into an itinerant preacher and revolutionary activist, who not only died challenging the police state of his day (namely, the Roman Empire) but spent his adult life speaking truth to power, challenging the status quo of his day, and pushing back against the abuses of the Roman Empire—react to the American Police State?

After all, Jesus—the revered preacher, teacher, radical and prophet—was born into a police state not unlike the growing menace of the American police state. When he grew up, he had powerful, profound things to say, things that would change how we view people, alter government policies and change the world. “Blessed are the merciful,” “Blessed are the peacemakers,” and “Love your enemies” are just a few examples of his most profound and revolutionary teachings.

When confronted by those in authority, Jesus did not shy away from speaking truth to power. Indeed, his teachings undermined the political and religious establishment of his day. It cost him his life. He was eventually crucified as a warning to others not to challenge the powers-that-be.

Can you imagine what Jesus’ life would have been like if, instead of being born into the Roman police state, he had been born and raised in the American police state?

Consider the following if you will.

Had Jesus been born in the era of the America police state, rather than traveling to Bethlehem for a census, Jesus’ parents would have been mailed a 28-page American Community Survey, a mandatory government questionnaire documenting their habits, household inhabitants, work schedule, how many toilets are in your home, etc.

Instead of being born in a manger, Jesus might have been born at home. Rather than wise men and shepherds bringing gifts, however, the baby’s parents might have been forced to ward off visits from state social workers intent on prosecuting them for the home birth.

Had Jesus been born in a hospital, his blood and DNA would have been taken without his parents’ knowledge or consent and entered into a government biobank.

Then again, had Jesus’ parents been undocumented immigrants, they and the newborn baby might have been shuffled to a profit-driven, private prison for illegals where they first would have been separated from each other, the children detained in make-shift cages.

Rather than disappearing from the history books from his early years to adulthood, Jesus’ movements and personal data—including his biometrics—would have been documented, tracked, monitored and filed by governmental agencies and corporations such as Google and Microsoft.

From the moment Jesus made contact with an “extremist” such as John the Baptist, he would have been flagged for surveillance because of his association with a prominent activist, peaceful or otherwise.

Jesus’ anti-government views would certainly have resulted in him being labeled a domestic extremist by law enforcement agencies.

Rather than being permitted to live as an itinerant preacher, Jesus might have found himself threatened with arrest for daring to live off the grid or sleeping outside.

Viewed by the government as a dissident and a potential threat to its power, Jesus might have had government spies planted among his followers to monitor his activities, report on his movements, and entrap him into breaking the law.

Had Jesus attempted to feed large crowds of people, he would have been threatened with arrest for violating various ordinances prohibiting the distribution of food without a permit.

Had Jesus spoken publicly about his 40 days in the desert and his conversations with the devil, he might have been labeled mentally ill and detained in a psych ward against his will for a mandatory involuntary psychiatric hold with no access to family or friends.

Had Jesus attempted to overturn tables in a Jewish temple, he would have been charged with a hate crime.

Rather than having armed guards capture Jesus in a public place, government officials would have ordered that a SWAT team carry out a raid on Jesus and his followers, complete with flash-bang grenades and military equipment.

Instead of being detained by Roman guards, Jesus might have been made to “disappear” into a secret government detention center where he would have been interrogated, tortured and subjected to all manner of abuses.

Charged with treason and labeled a domestic terrorist, Jesus might have been sentenced to a life-term in a private prison where he would have been forced to provide slave labor for corporations or put to death by way of the electric chair or a lethal mixture of drugs.

Indeed, as I show in my book Battlefield America: The War on the American People, given the nature of government then and now, it is painfully evident that whether Jesus had been born in our modern age or his own, he still would have died at the hands of a police state.

Thus, as we draw near to Christmas with its celebrations and gift-giving, we would do well to remember that what happened on that starry night in Bethlehem is only part of the story. That baby in the manger grew up to be a man who did not turn away from evil but instead spoke out against it, and we must do no less.