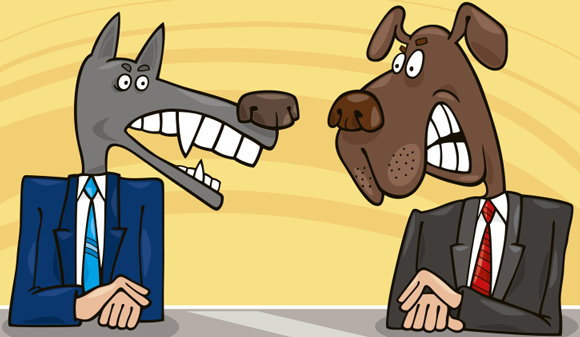 Obama's national debt rate on track to double … President Obama likes to say that raising the nation's borrowing limit "won't add a dime" to the federal debt, but he neglects to mention that the government already has borrowed the equivalent of more than 60 trillion dimes since he took office. When Mr. Obama became president in January 2009, the total federal debt stood at $10.6 trillion. This week, it hit $16.7 trillion — an increase of 57 percent. In the same time frame under President George W. Bush, total federal debt rose 38 percent. Under President Clinton, it rose 32 percent. – Washington Times

Dominant Social Theme: The budget debate is a huge watershed in US history. The fate of a nation is being decided.

Free-Market Analysis: We can see from this article in the Washington Times, excerpted above, just how scripted the current budget debate really is. The federal debt is out of control; the argument over the government shutdown surely avoids the larger issues.

Republicans have made a step toward resolving the impasse as of this writing and probably Friday will bring a further climb down. It may be greeted as a "victory" for President Barack Obama, but as we pointed out yesterday in an article about the budget, the trends that generated the impasse are neither ephemeral nor unserious.

The Tea Party movement in the United States is much more than any specific or organized event. It springs up from the psyche of the US culture. Its spoken and unspoken certainties are the peculiar product of US history. It is the result of what we like to call the Internet Reformation and it is being played out in different ways in other countries, as well.

That the GOP attempted to co-opt it and its "members" has little do with its ultimate reality. It is real. And it was unanticipated, as best we can tell. It is a harbinger of a further cultural unraveling that makes the future direction of the US uncertain, to say the least.

It likely wasn't supposed to be this way. The power elite with its increasingly powerful banking base has spent about 300 years trying to globalize money control and power. The modern efforts, from what we can tell, really took off about 100 years ago with the creation of the Federal Reserve.

Of course, it was the Civil War and the resolution in favor of the federal government as to whether or not states could secede that set the modern process in motion. Once this was decided, further centralization proceeded inevitably. The federal government got bigger and bigger, and corporations were bestowed a corporate shield which generated today's mercantilist environment.

Buoyed by the ability to print endless amounts of money-from-nothing, the US government and those who stood behind it began to spread federal authority throughout the land and eventually throughout the world. Wars were launched and control was consolidated. History was rewritten. Education was modified; science was controlled; dominant social themes were launched to control minds and lives.

It is this scenario within which the current debate must be analyzed. Of course, there is no doubt that the US is indeed facing a crisis. The Washington Times story makes this quite clear, as follows:

The administration says the government will run out of authority to pay its bills by Oct. 17 unless Congress raises the debt limit again to allow more borrowing. The president portrays the move as one of simple responsibility. "It does not increase our debt," Mr. Obama said. "It does not grow our deficits. All it does is allow the Treasury Department to pay for what Congress has already spent."

The president rarely mentions that he, by law, approves congressional spending, and his argument glosses over the nation's burgeoning total debt. "It's certainly not the whole story," said Alex Brill, a budget specialist at the American Enterprise Institute. "We've seen a dramatic increase in the debt held by the public in the last four or five years, and it's projected to only get worse."

On Oct. 4, the debt held by the public — not including Social Security and Medicare — had risen 89.3 percent since Mr. Obama took office, according to FactCheck.org, a nonprofit project of the Annenberg Public Policy Center of the University of Pennsylvania. The administration recently projected an annual deficit of $750 billion in the fiscal year that began Oct. 1 and $626 billion the year after that.

In the increasingly contentious showdown with Congress, Mr. Obama also is fond of pointing out that budget deficits — the annual red ink that contributes to the total debt — have been falling at the fastest pace in 60 years. That's true largely because spending rose dramatically in his first term as the administration tried to blunt the impact of the Great Recession.

Although a "grand bargain" on spending and entitlements eluded the president and congressional Republicans in 2011, Mr. Brill said, it is the kind of approach still needed to get the debt under control. "It's logical and appropriate what we're hearing from many Republicans that we need to not only deal with the debt limit itself but we need to deal with the underlying cause of this pressure to increase the debt," he said. "That means we need to deal with entitlements."

It's nice to speculate about getting the "debt" under control, but anyone who wants to examine the reality of the West's slide toward insolvency (and that includes the US) has to conclude that these are, in a sense, managed policies.

Consider that a free people are independent of the government and likely want to stay that way. The South fought a war over it. To take a free people and subjugate them is a difficult task and one that does not occur all at once. It is the product of considerable planning and effort.

Today in the US there are 40 million people on food stamps and tens of millions taking advantage of other government programs including Medicare, Medicaid and soon, Obamacare. The actual obligations of the US government are something like US$200 trillion, all told. If the US is to get out of debt, it will have to inflate, but even that promises considerable insolvency.

Under Bill Clinton, the US enjoyed a more secure financial situation. It was George Bush who destabilized US finances once again with ambitious social programs and then with war. Surely, for anyone studying the situation closely, it will soon become clear that the US is not in the position it is in by happenstance.

There is a force for globalism in this world, and it this group, a variety of internationalists from all fields, that has worked steadily to undermine sovereignty and solvency both in Europe and the US. In the EU, we can see the results of this undermining. Austerity is merely an excuse to further blur the boundaries between nation-states and Brussels. The top have bluntly said as much.

Let the US resolve its current debt crisis and this process shall take place in North America, too. Which brings us to the issue of the North American Union…

There is a reason why immigration has suddenly re-emerged as a significant issue. The strategy is apparently one that involves a pincer: As the US's economy erodes, so will its borders. The plan, from what we can see, is to gradually draw Mexico and Canada closer to the US before declaring a formal union.

For investors, this brings up certain considerations. First of all, the economy and stock market will probably go up again, participating in one last "party" before a further collapse. And the collapse itself shall perhaps bring on a number of changes, including a more forceful EU and the possibility of a viable North American Union. Multinational corporations spanning all three countries will doubtless reap the rewards of pan nationalism.

We're not fans of this, mind you, but we spend our time reading the "tea leaves." The US's current condition is likely part of a larger series of maneuvers and each one fits together within the other if one analyzes the entire trend from a globalist perspective.

What makes this scenario problematic, if anything, is what we wrote about yesterday regarding the rise of the Tea Party and the persistence of the Internet Reformation. Globalist plans are not so difficult to recognize these days and generally, once people understand, they resist manipulation.

Whether the Union that is being contemplated apparently by the top North American elite proves viable will depend a great deal on the outcome of the educative process provided by the Internet and the catastrophes manufactured by international elites.

The current budget battle is just one small conversation within a much larger context. Its conclusion will enrich some and impoverish many. It bears watching. Please take care.