“Fear is the cradle for interpersonal hatred and social stigma.”

Reports of recurring emergent xenophobia have dominated media headlines since the outbreak of the COVID-19 virus last year.

The systemic (and apparently tacitly endorsed) anti-black hysteria that erupted way back in March 2020 in mainland China was perhaps the most blatant example. The operators of major food vendors in Beijing and other large Chinese cities, including McDonald’s, openly prohibited patronage from black customers. 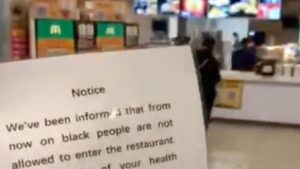 China is by no means alone in the practice of racial, ethnic, and religious discrimination on hygiene grounds.

Indian Hindus encouraged their religious fellows to avoid buying vegetables from Indian Muslims to avoid COVID. Foreigners in Thailand of all races have been repeatedly barred from normal social activities with no explanation and forced to pay double at hospitals for PCR tests. Western media is sure to highlight anti-Asian xenophobia in the US – anything to work an extra shot at the Deplorables into coverage.

If public school indoctrinated you in the post-integration era in the United States, you were likely treated to a curriculum that taught the value of “inclusivity” and “diversity.” However well-intended by some true believers who push it, the Western dogma that racially-based discrimination has no biological basis is inaccurate.

Despite the best propaganda efforts of liberal (small l) institutions, disgust-driven racism fueled by fears of disease remains prevalent throughout the world and has been as long as humans have been human. The COVID-19 pandemic has done wonders to lift the veneer of civility that papers it over.

Rather than the product of an illiberal upbringing among the uncultured classes as the left might wish it to be, disgust is a hardwired means to avoid potentially fatal pathogens, one of the easiest ways to die in nature:

“Pathogen avoidance behaviour is universal across cultures, with all societies demonstrating individual and group-level hygiene behaviours. These include bodily, domestic and communal cleansing, avoidance of close contact or exchange of bodily fluids with others (with exceptions for mates and kin), and the avoidance of foods that are spoilt, contaminated or unfamiliar… disgust should be considered an adaptive system that drives the behavioural avoidance of infectious disease“.

Social science researchers emphasize “the universality of disgust, showing that there is much that is similar about disgust responses between animals and humans, between humans and over historical time.”

What does the disgust mechanism suggest its host to avoid? The cues for disgust (and subsequent avoidance behavior) include “bodily wastes, body contents, sick, deformed, dead or unhygienic people, some sexual behaviour, dirty environments, certain foods—especially if spoiled or unfamiliar—and certain animals.”

If you were a picky eater as a kid, afraid of new or exotic foods, that was the disgust mechanism doing its work in an attempt to keep you safe. Likewise, if you vomited the first time you saw/smelled a rotting corpse in a munitions crater during a tour of duty in Iraq, again, that was a hardwired biological response to physical stimuli – far beyond a mere transitory discomfort with a death scene. 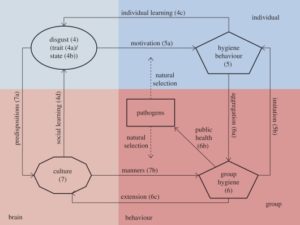 Whereas the disgust mechanism was once applicable in the social sense only to an immediate group of hunter-gatherers, civilization “scaled up” this innate social dynamic, beginning with the agricultural revolution and the establishment of bona fide society.

The cultural offshoots of the evolutionary disgust mechanism, which has persisted in even the most enlightened cultures irrespective of ideological commitments to diversity, manifest in sometimes interesting ways. The intersection of evolution and culture has produced volumes of works in every major religion that prescribe appropriate hygiene practices to its adherents.

Book 4 of Hadith 27, for example, directs followers of Muhammed to wash their anuses with an odd number of stones in their left hands following defecation. Thousands of other fundamental hygiene instructions with similar levels of detail are prevalent in the Abrahamic texts.

The authors of the Bible, as well, may have mistaken the disgust mechanism for divine inspiration. In their cornucopia of ancient rules – ostensibly dictated by God but more likely to have originated culturally – the early Jews explicitly prohibited certain food groups:

A commandment from God with such specific instructions for food to ignore seems absurd (fins vs. no fins?), but it makes more sense within the context of the disgust mechanism.

Shellfish are known common vectors of pathogens (often deadly in the ancient Middle East); the elders who wrote the social rules of the time were likely instantiating some of the earliest public health codes disguised as celestial commandment.

Fast forward to 2021. Masked Karens in supermarkets coast to coast harangue random maskless shoppers until they comply. In more fascistic jurisdictions, average Americans can’t even visit the gym to work out their frustrations. Vaccine skeptics, according to the Huffington Post et al, are akin to murderers. Amazing.

Again, this is a global phenomenon.

95% of the Thai public in a recent poll wants to keep foreigners out of the country — even with: 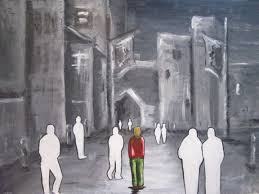 Does increasing distrust of the wider foreign world also portend a negative forecast for the foundational strength of the state? Are humans destined to revert back to smaller social units –  with the “Dunbar number” 250 being the maximum that evolutionary psychologists believe that we are capable of committing to — out of fear and distrust?

Politically and socially, things get out of hand when hysteria and fear reach critical mass. Finding your tribe – a group with genuine shared interests and obligations for mutual security and provision of resources based on sincere social connection — appears to be more important than ever.