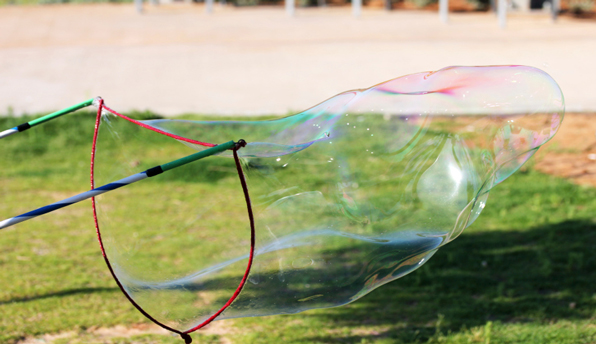 Is the Fed fueling a giant stock market bubble? … Not only has the S&P 500 fully recovered from the financial crisis, it's a staggering 30% higher than the peaks of the Internet and housing bull markets. But is this really the case? With unemployment still above 6%, how could we find ourselves in the throes of yet another brewing catastrophe? Didn't investors and analysts learn anything from the past decade and a half? While it requires some explanation, the answer is that we're most likely not experiencing another irrational inflation of stock prices. – USA Today

Dominant Social Theme: The Fed is a responsible creature and would never create a speculative mess.

Free-Market Analysis: If the government or mainstream media say something definitive, assume the opposite. This article explains to us that the Fed has little power to create "irrational" bubbles. And that the current stock bubble – bigger than any bubble in history – is a rational one.

This is apparently the position of those who stand behind government and want investors to feel safe about placing funds in equities.

We've pointed out that this is surely a dominant social theme. We first noticed it when we came across Janet Yellen's astounding claim that the Federal Reserve could not proactively reduce asset bubbles. It has continued with other statements and editorials of a similar nature. We analyzed Yellen's original article (and several others) and then most recently similar statements made by former Fed head Alan Greenspan.

Shock: Markets to the Moon… as Yellen Prepares for the Biggest Stock Crash Ever

The market's record level is instead a predictable response to the Federal Reserve's policy of keeping interest rates at historically low levels. As an initial matter, it's important to appreciate that monetary policy itself doesn't cause bubbles. This may sound strange if you've read much about the financial crisis, given that the Fed is often blamed for both inflating and popping the housing bubble. But this narrative is flawed.

… This isn't to say that the central bank can't distort asset values by way of monetary policy. Indeed, not only can it do so, but it can do so to a considerable degree. "Monetary policy has powerful effects on risk taking," Fed Chairwoman Janet Yellen acknowledged in a speech earlier this month. "Indeed, the accommodative policy stance of recent years has supported the recovery, in part, by providing increased incentives for households and businesses to take on the risk of potentially productive investments."

… As Bloomberg's Noah Smith recently explained: "The value of a financial asset is the discounted present value of its future payoffs, and when the discount rate — of which the Fed interest rate is a component — goes down, the true fundamental value of risky assets goes up mechanically and automatically. That's rational price appreciation, not a bubble."

Does this mean stock prices won't at some point deflate? No. In fact, you should probably assume they will. Stock prices correct all the time. But what's important to remember is that a correction isn't a bubble.

This is really amazing. Sure, the mathematics of expansion may be logical; they always are until they are NOT. Anyway, the ultimate reason for the article is promotional. The article wraps itself into rhetorical knots to disavow central banking involvement in significant equity expansions.

We'd rather the article argued what Greenspan and Yellen have argued, that over-expansions are inevitable and due to human nature. That would be more convincing than arguing current markets are merely mathematical outcomes.

Such articles as this also fuel the meme that Fed "money printing" is generally insignificant, especially since central banks like the Fed tend to print money at the request of legislative authorities. Forbes made this argument not so long ago in a post entitled, "The Fed Is Not Printing Money, It's Doing Something Much Worse."

The article states bluntly: "To be clear, the Federal Reserve has not been printing money. It hasn't needed to, and that's where the horrors of the Fed's machinations become most apparent." More:

The lesson here is that despite what is broadly presumed by economists and the punditry, the Fed can't force money into the economy, nor can it increase "money supply." Money supply is demand determined, and with the economy still relatively weak, there's very little demand for the dollar credit that's been expanded by Fed purchases of bank assets.

What about the supposed "money printing" by the Fed? There's once again no such thing occurring. Instead, the Fed is able to engage in its program of quantitative easing thanks to its 25 basis point payments for bank reserves. With the funds borrowed from banks, the Fed has the means to purchase all manner of Treasuries and mortgage bonds.

But a Forbes feedbacker, Mike Dar, points out the following:

Unfortunately, none of this takes into account the off-book printing the Fed has done since 2008. 17 trillion, aside from any debt posted, has been created out of thin air, by the Fed. Other countries Centrals have done the same.

While the funds were 'rescues', much of those funds found their way to the markets [by] Primary Dealers hedge funds.

Most people believe that the only money created is that of congressional approval, but the Banks, Federal Reserve and other Centrals, do not have a limitation where they are the only participants under the guise of saving/rescues and to eliminate interbank debts, supposedly largely, in derivatives.

Ron Paul brought suit and the Fed admitted to some 11 trillion, years ago, was sent out around the world at the time. We have to take the Feds word that was all at the time, hence so much interest in a 'full accounting'. … This article is a little short in its appraisal.

Dar states what we have concluded as well. There's no limit to central bank money-printing machinations. We're told that Fed strategies have expanded in the recent past. But that's not true, either. The Fed was supposedly limited in its money printing operations in the 1920s by a gold/paper ratio. Fed bankers of the time apparently ignored it, printed a great deal more money and set in motion the Roaring '20s and subsequent collapse.

No, it hasn't gotten any better. Give a handful of men, and occasionally women, the opportunity to create money without significant limitations or oversight and they will find ways to print more and more.

Even if the Fed was turned into a fully "public" central bank instead of the hybrid public-private entity that it is today, nothing much would change. It is the MONOPOLY aspect of central banking that is at fault. Only Fed paper currency is allowed to circulate freely of constraints. Try, for instance, to pay your taxes in something other than Fed-printed US currency …

Central banks create bubbles by expanding the money base and debasing currencies, thus setting into motion investment euphorias that lead inevitably to crashes and terrible economic busts. We long ago predicted the rise of the Wall Street Party and wrote that globalist elites were determined to expand this stock-buying binge as far as possible and for as long as possible, longer than might seem feasible.

They would print and print beyond anyone's expectations of what was remotely justifiable.

This is just what's happening. The reason we are observing a new "anti-bubble" meme is because the current expansion is becoming ridiculous even to the average investor or observer. So now those behind this unsustainable expansion need to explain their actions while downplaying the significance of bubbles generally or specifically.

This alone tells us that the intention is to push the marketplace higher still using every legal and illegal method available, from flash trading, to money printing to "plunge protection."

This is to be, apparently, the party to end all parties. And when it does stop – whenever that is – the bust will be absolutely horrific. And the calls will rise for a more internationalized monetary system. This happened after the US crash of 1907. Elite strategies never change. They are simply recycled.

What a party this is for those who are able to take advantage of it via market timing, prudent hedging, etc. New fortunes are being built every day. The first "trillionaires" will be minted. For a while it will seem as if those with the wherewithal to speculate in the markets are a new species: genius homo.

Eventually this party will be over, and the resultant crash will surely reverberate – grimly and ruinously – for many decades to come.