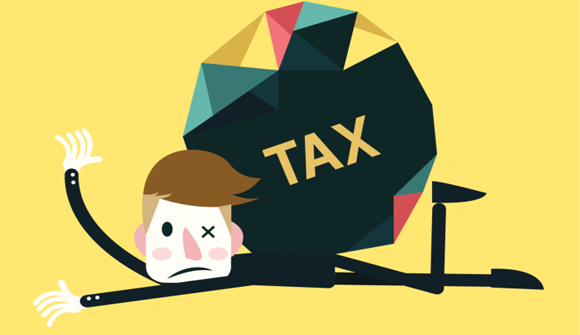 On January 1, your taxes went up. But the federal government thinks that you are too stupid to notice.

They actually want you to believe that they only raised taxes on “greedy” corporations, or on the “evil” oil, gas, and coal industries… and that these taxes will in NO WAY affect regular, working people.

Consider, for example, that domestic crude oil products now carry a 16.4 cent per barrel tax. Stock buybacks will now be subject to a 1% excise tax. And large companies have been shoehorned into an alternative minimum tax.

(This is only a tiny, partial list of the new tax rules that came into effect on January 1st, all of which add up to hundreds of billions of dollars in additional taxes.)

At first glance, these taxes all appear to target big businesses and unpopular industries. But rest assured you’ll be paying for all of these taxes out of your own pocket.

That’s because taxes, like shit, always rolls down hill. Think about it— a ‘corporation’ can’t actually absorb the cost of taxes. A corporation is nothing but pieces of paper. It’s not real.

The burden of additional taxation falls onto the owners of the business… and onto the consumers who buy its products.

Last time I checked those are all human beings.

But if you keep peeling back the onion, the end point is almost invariably the little guy… some retired schoolteacher whose pension fund invested in a newly-taxed oil company.

Otherwise the new taxes roll down to the poor sucker at the gas pump who ends up paying more to fill up his car.

And that’s the really absurd part, because many of these new taxes were part of the hilariously named “Inflation Reduction Act.”

But giving legislation a catchy, noble-sounding name doesn’t work like a magic spell. The reality is that these new taxes will actually contribute to inflation.

All it does is raise taxes and give the government a larger chunk of the economy.

If you think about the economy as a big pie, taxes are the government’s slice. So whenever the government raises taxes, they’re trying to make their slice bigger… which makes everyone else’s slice smaller.

You’d think that politicians would understand this very simple concept. And that, rather than raise taxes, they’d focus on increasing the overall size of the pie so that everyone’s slice is bigger. Duh.

But that’s not how they operate. In fact they never tire of inventing new ways to raise taxes and blow your money on the most idiotic things imaginable.

For example, the 4,000 page spending bill which Congress rammed through without reading last week set aside $3 million for a “universal hip-hop museum” in New York City, $1.5 million for the “COVID-19 American history project”, and $3+ million for a hiking trail in Georgia to be named after Michelle Obama.

Then there’s the $5 million of your money “to examine the impacts of culverts, roads, and bridges on threatened or endangered salmon populations.”

Clearly the salmon constituency is quite powerful.

One of the most absurd wastes is the $2.3 million allocated to the US Department of Education “to conduct outreach to borrowers of [student] loans. . . who may qualify for loan cancellation.”

So essentially the government is spending taxpayer funds to encourage borrowers to default on taxpayer-funded student loans.

Imagine a bank CEO using his shareholders’ money to encourage borrowers to default on their bank loans. That’s basically what the government is doing. You just can’t make this stuff up.

Naturally the government has to come up with the money for this dumpster fire somehow. And they do this by either increasing the national debt (which closed 2022 at a record $31.4 TRILLION) or by raising taxes… on you.

They mask these tax hikes by pretending to only tax big companies. But again, it all rolls downhill to you.

It’s all so insulting. And that’s why it makes so much sense to use the multitude of completely legal options at your disposal to reduce your tax bill.

And you don’t even have to do anything particularly exotic to reduce your taxes. Chances are you’re doing some things already.

People who live near the state line will often drive across the border to shop or fill up their tanks, because the sales and gasoline taxes in the neighboring state may be lower.

In my own case, long ago I realized that a huge chunk of my monthly cell phone bill was comprised of state taxes.

So I looked up which state had the lowest taxes on cellular service (which happened to be Nevada at the time). I established an address there and then switched my account to be Nevada-based so that I could save on the tax.

Even something as simple as donating old clothes and household goods makes for an easy tax write-off.

Naturally, though, tax mitigation can go far beyond these small, simple examples.

Tax advantaged retirement accounts can help you reduce your current taxable income, and defer taxes in certain scenarios so your investments grow before they are taxed (or with some structures, grow entirely tax free).

A solo 401(k) plan, for example, now allows tax-advantaged contributions of up to $73,500 per year for your retirement.

You could also set up a foreign or domestic trust to more easily pass down your assets to your heirs, and reduce the estate taxes that they would owe upon your death.

For people who are even more flexible (and motivated), moving remains one of the biggest ways to legally reduce your taxes.

I personally went a step further and moved to Puerto Rico back in 2018, where I enjoy several of Puerto Rico’s generous tax incentives (which are now collectively known as “Act 60”).

I pay just 4% on business income, and 0% on most investment income. And let me tell you— it’s wonderful to be able to make investments without ever having to consider the tax consequences.

Puerto Rico is far from alone in offering tax incentives.

And for US citizens who move overseas, the Foreign Earned Income Exclusion allows you to earn $120,000 per year, tax free. If you’re married (and include the tax benefits for foreign housing), you can earn more than a quarter-million per year and pay very little tax.

Governments tend to think of taxpayers as dairy cows; we exist to be milked… and then watch helplessly as they they pour the milk down the drain.

But you can easily put a stop to this insanity by using their own rules to your benefit. It’s a great way to take back control.