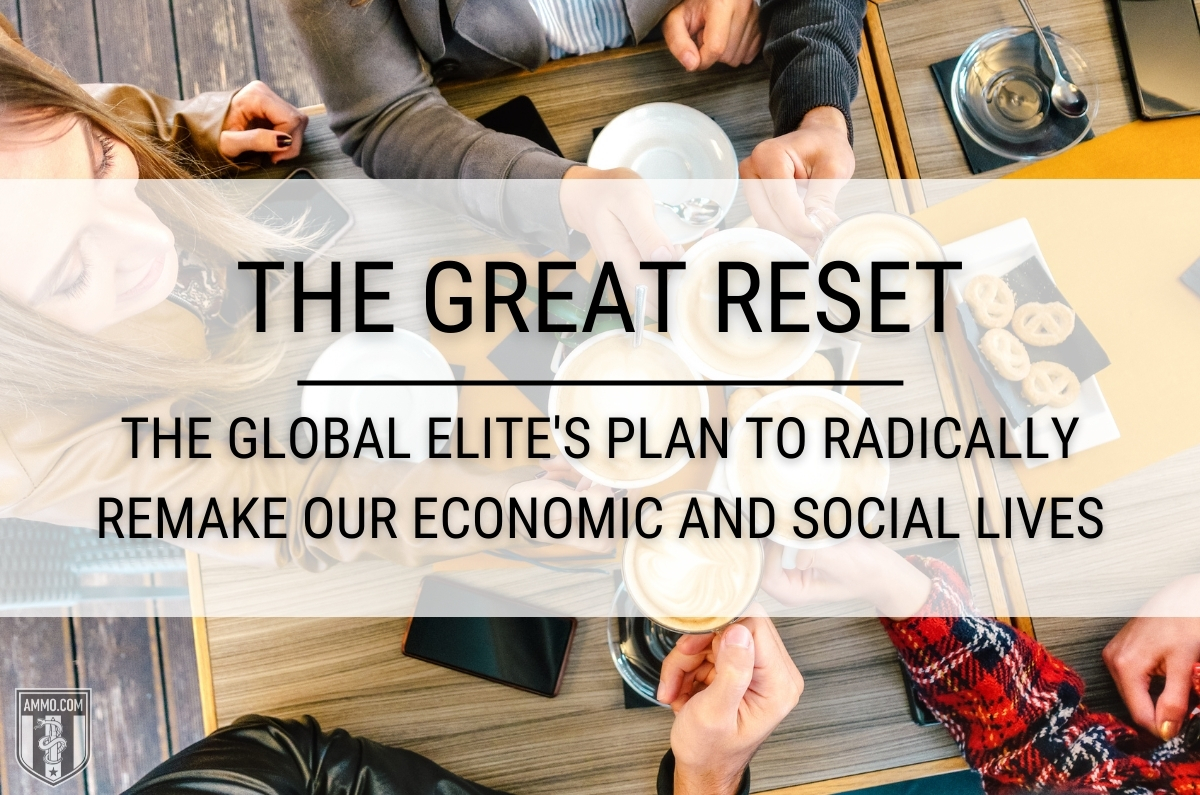 The Great Reset is upon us…or at least the powers that be are trying to bring it out. What was once a fringe “conspiracy theory” is now on display plain as day for everyone to see. The economic, political, academic, and media elites around the world are leveraging the chaos, confusion, and restrictions on liberty from the COVID-19 lockdowns and using them to radically alter society around the world.

What will this change look like? The global elites want to create a society of renters who own nothing, while also pushing a social agenda that would be unpopular with the unwashed masses and difficult to implement in a society with a broad, ownership-based middle class. What this means is that you would rent not just your home, but also your phone, computer, car (though you probably will “carshare,” the term for renting a car when you need one for an extended period and summoning one when you need it for a ride), and even the pots and pans you cook with.

The flip side of this will be a radical transformation of the world economy. No longer will you have a job in the sense that it has traditionally been understood. Instead, you will work various and sundry “gigs,” all of which place you in a precarious position at any given time. You will receive a fee for services performed, with no benefits, paid time off, healthcare, or anything else that the middle class in the West has become accustomed to.

To facilitate the Great Reset, rural populations will have to be coerced into more concentrated population centers since dispersed populations have too high a “carbon footprint.” The suburbs will be a thing of the past as suburbs and exurbs become more like cities. Mixed-use housing, where you and 500 other people live in a mid-rise condo hive with shops and “workshare” spaces (the new version of an office – on your dime, not your employer’s) in the same area.

The short version is that it’s a total end to the American way of life, specifically the way of life of most of the Western middle class. The specifics, including the why, are a longer story that you’re going to want to read if you want to be ready to fight against the Great Reset.

What is the Great Reset?

Knowing what the Great Reset is can be difficult because official sources on the matter – World Economic Forum, the primary mover behind the Great Reset, and its affiliated organizations and individuals – cloak their aims in vague euphemisms like the main slogan for the Great Reset, “build back better.”

We have discussed in our articles on Cultural Marxism, Critical Race Theory in public schools, and, George Soros how the enemies of freedom often use vague, non-specifically positive language for their projects. These are generally words that, when taken at face value, no one could possibly disagree with. Who would be against building back better?

So what is the Great Reset?

At its core, the Great Reset is an attempt to enforce socialism through private companies rather than only through the government. Think of it as “socialism with Amazon Prime characteristics.” That being said, the government will certainly play a role in the Great Reset by angling for higher taxes, which the wealthy will be able to avoid using armies of lawyers and accountants; adding additional bureaucratic red tape, which the wealthy will avoid using the same armies of lawyers, connections, and special carveouts; and growing big government social programs a la the New Deal, which will disproportionately benefit the wealthy and preferred underclass who will be weaponized against the broad middle class. An excellent example of a Great Reset program in the United States is the proposed Green New Deal, which we will discuss in greater detail later.

Here is a glimpses of how the Great Reset will look:

Is The Great Reset Real?

This might all sound a little far-fetched; however, unlike other alleged “conspiracy theories” which require a great amount of research to prove are true, the Great Reset is right out there in the open for everyone to see. The people pushing it brag about it, speak of it openly, craft propaganda campaigns around it, refer to it explicitly by name, and get publicly frustrated and angry when the “dog isn’t going to eat the dog food.”

Klaus Schwab isn’t some random guy on Twitter or a blogger with a couple dozen readers, he is an extremely powerful man and head of one of the most important elite globalist organization in the world, the World Economic Forum.

The Great Reset is larger than a single 40-second viral clip. There’s an entire page about it on the World Economic Forum’s website, including a lot of vague language that doesn’t tell you much of what it actually. Time‘s website includes a rather massive cache of articles pushing the subject as unassailably good and beyond question or reproach. A video on the World Economic Forum’s YouTube channel is effectively a five-minute PSA of talking points on the subject.

Alarmingly, the BBC and others are running articles encouraging you not to believe your own lying eyes, insisting that this is a conspiracy theory not rooted in fact. Additionally, Wikipedia includes an entire section assuring you that the “conspiracy theory” of the Great Reset bears no relation to the pure, noble intentions of people like Klaus Schwab, Bill Gates and Tony Blair.

The Great Reset is clearly real, but how do the powers that be intend to force it on the world?

Grooming for a Police State

Whether one thinks that the COVID-19 lockdowns and restrictions were a good faith response to a public health emergency or not is irrelevant. The fact of the matter is that it accustomed Americans and Westerners to significant restrictions on their freedoms, including freedom of movement. More than that, it showed those in power that people that if you created enough fear, Americans would tolerate the restrictions.

Thus, consciously or not, global elites were grooming the world population for a police state. Fortunately, there has been some pushback and vaccine passports are encountering stiff resistance from both elected officials and the general population at large. For most of 2020 and 2021, the most freedom loving people on earth – Americans – were walking around with dirty, useless masks on to comply with a government mandate. A mandate that after further scrutiny, made no sense. Americans even allowed their children to be subjected to this as a condition of attending school.

The COVID-19 lockdowns were not the first time that Americans were groomed for police state – TSA is the biggest example of this, however, we also see examples of this in our public schools with metal detectors and warrantless searches.

If nothing else, the elites learned that there is just about nothing that America and the world will not tolerate provided that you scare them enough.  The burning question now is how will Americans be scared into further erosions of their liberties?

The Great Reset: The Global Elite’s Plan to Radically Remake Our Economic and Social Lives originally appeared in The Resistance Library at Ammo.com.