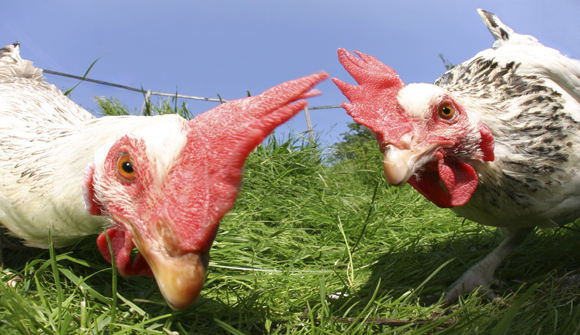 The Race Is On to Find Organic Pesticides – Hunt for Beneficial Microbes Comes Amid Regulatory Scrutiny of Man-Made Chemical Insecticides … On his way to a conference in Orlando, Fla., Brian Vande Berg pulled his rental sedan over every 10 minutes to hike along beaches and marshes and occasionally stoop down to pack dirt into small, plastic vials. His target: microscopic, soil-dwelling organisms that agricultural companies consider a new frontier in protecting crops. Seed and pesticide makers like BASF SE, DuPont Co., Bayer AG and Monsanto Co. are investing heavily to develop new products incorporating organisms like bacteria and tiny fungi, which executives say can help corn, soybean and other plants fend off pests and grow faster. – Wall Street Journal

Free-Market Analysis: We've been writing a series of analyses of natural and organic farming and food; the above article in the Wall Street Journal fits right into this evolving meme.

Corporations like McDonald´s are adopting "organic" as a kind of brand these days. But "organic" has a number of meanings going back decades (and actually thousands of years, in a sense.) Maybe referring to this evolving meme simply as "organic" does a disservice to those who use the word within a previous paradigm.

Green farming was a meme because it invented a new context ("green") for supposedly advanced agricultural technology. But when it comes to "organic," it seems that those who want to create a "Big Ag" agricultural advantage have decided that a wholesale redefinition is preferable to creating a new nomenclature.

The redefinition is being pursued via USDA and FDA regulations aimed at reconfiguring what organic means and who can use the term. And now, Big Ag itself is beginning to leverage technology to further corrode the word.

Mr. Vande Berg, a research and development director in Bayer's CropScience division, is part of an expanding hunt that has led researchers to far-flung corners of the U.S., combing dry creek beds and compost piles for tiny microorganisms. The companies aim to coat the outsides of the seeds with such beneficial microbes, and in other cases, spray them on growing plants. The push into microorganisms reflects an effort by agricultural companies to diversify beyond synthetic chemical pesticides, amid growing regulatory and consumer scrutiny.

Pesticides and other products incorporating microbes typically can be rolled out faster than man-made chemical insecticides and weedkillers, which have drawn closer scrutiny from U.S. regulators in recent years following environmental concerns raised by consumers, advocacy groups and organic farmers.

"There are a lot of things [microbe-based products] can do that today we look to synthetic chemistry to do," said Paul Schickler, president of DuPont's seed unit, Pioneer. Microorganisms have been narrowly used for decades in agriculture, mainly in coating soybeans and other legumes to better absorb nutrients and fight fungus. Now, companies say advances in genetic-analysis technology and cultivation practices enable them to find and develop new microorganisms that can perform much broader functions, such as shielding crops from more diseases and pests or mitigating damage from drought.

"The DNA diagnostics today give you a level of understanding you didn't have five to 10 years ago," said Robert Fraley, Monsanto's chief technology officer. Monsanto and its rivals for nearly 20 years have sold genetically modified seeds for crops like corn and cotton. They splice in traits from other organisms that enable the seeds to produce bug-killing proteins or withstand the chemical sprays that the companies also sell.

Genetically modified foods, or GMOs, are in an estimated 80% of packaged foods. Some companies, like Ben & Jerry's, are trying to go GMO-free. But it's not easy. Incorporating microscopic organisms such as bacteria and fungi represents a different approach, encouraging helpful bacteria and fungi to live on the plants' surfaces, helping plants absorb nutrients and providing defenses against bugs and disease. Microbe-based products face skepticism from some environmentalists. But because they don't rely on genetic engineering or man-made chemicals, the products can be used in producing organic and natural foods.

All of the above sounds exciting and potentially helpful. But we´ve noticed when Monsanto and other Big Ag companies get involved in agricultural products, the result itself ends up being bioengineered in some manner.

Now, perhaps there is nothing wrong with bioengineering or even with GMO foods, but at the very least the process is troublesome.

That´s because companies like Monsanto are the size that they are because judicial fiat (in the form of corporate personhood) and central bank money printing has artificially expanded them.

The combination of corporate personhood and monopoly fiat money has created an unholy alliance between multinationals and big government entities. The offspring consists of vast, sprawling enterprises, heavily regulated.

Absent judicial force this paradigm would not be available. Farms would be smaller and subject to fewer technological permutations.

It is very possible that there would not be Big Ag at all, or Big Pharma for that matter. These industries are based on patents, and patents, too, are enforced via government power. If government didn't stand behind the patent system, ready to punish those who transgressed on authorized patents (and copyrights) then much of the financial incentive underlying multinational efforts in these fields would be negated.

Not that that would be such a bad thing, potentially. We are used to believing that multinational corporations and their government partners are a normal evolution of capitalism. But they are not. Absent a slew of judicial rulings the modern corporation would not exist.

In their place we would likely have smaller farms and farming partnerships where size was needed. There would be advances in animal husbandry and crop growing as well, but nobody would be creating seeds that could only grow once and patenting others so that no one else could use them.

The Green Revolution that was supposed to be so powerful and progressive is now being shown to have unbalanced the fertility of soil over the decades that its technology was applied.

It is monopoly money power in large part that has created the dominance of Western technology and innovation. But many of these innovations turn out to have negative consequences. Progress, when achieved through a monopoly of state force, is seemingly an illusion in many cases.

And now we can look forward to bioengineered superbugs that will accomplish for farming what green technology did not – create an abundance of food without negative consequences.

Do you believe? These advances are being driven by a monopoly of force, not by the freedom of a voluntary marketplace. Eventually, we predict, there will be tears – as there must be when monopoly solutions are relentlessly generated without the competition of the Invisible Hand.

Investors and farmers would likely do themselves a service by remaining skeptical when it comes to this latest green iteration … Big Ag bioengineering.

In the short term such bioengineering may prove profitable, indeed. In the longer term, old-fashioned organic procedures may prove continually alluring and likely more healthful.

Organic Promotion versus "organic." Where do you stand?