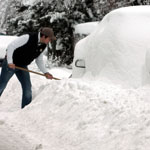 Relaxing by a harbour in his native Scotland, this is Mike Mackay (pictured left), a mid-ranking civil servant working for one of the country's smaller quangos. If he looks pleased with himself, he has very good cause to be – because last year Mr. Mackay was paid more than £350,000 of public money. Although the IT manager is more or less unknown, his astonishing earnings mean he is paid £150,000 a year more than Gordon Brown. Nice work if you can get it: Chief Information Officer of the Youth Justice Board Mike Mackay relaxes at the beach. Indeed, over the past three years the UK taxpayer has handed him close to £1million – making him one of the highest-paid public servants in the country. He also appears to be one of the best-treated. Mr. Mackay works to a flexible schedule and usually spends four days a week in the central London office of the Youth Justice Board. Fridays are usually spent 'working from home' in Aberdeen. The cost of his flights to and from Scotland as well as his London accommodation are picked up by the Youth Justice Board. – Telegraph

Free-Market Analysis: Actually, we are not surprised by this sort of public sector salary. The total in US dollars is probably somewhere around $700 ,000 (versus pounds), but any way that you slice it, this sort of money is big. Those in the public sector often speak of the difficulty in attracting private market talent to government ranks but the financial crisis has actually exposed an inequity that has become more marked over time. It will persist as a difficult issue over the next few years unless the collapsed economic bubble can be fully re-inflated.

We are on record as believing it cannot be. While markets can be pushed skyward by printing money, and, yes, that scrip can find its way into the larger economy as a result, the mal investments that have shown up courtesy of this latest bubble have likely not been resolved. This means that private sector employment will be slow to grow. With the exception of parts of the financial sector, the private marketplace will not only be sluggish from an employment standpoint but also form a salary standpoint.

The inequities between the public and private sector will be a persistent problem until they are fixed. And chances are they will be fixed – not voluntarily but by force likely akin to an economic tidal wave – because in both Britain and the United States, the patronage that has built up thanks to public sector unions, litigation, etc. is most difficult to level. Here's the problem as stated in a US newspaper, having to do with out of control public sector spending in New York State:

In 1998, New York spent about $3.4 billion on pensions for state and local government workers. A decade later, that figure had ballooned to nearly $7 billion, a jump of more than 100 percent, according to the state comptroller. State taxpayers footed most of the bill. In fact, last year, for every $100 a government worker spent on his or her retirement, taxpayers contributed about $1,000. At the same time, residents continued to see their own private pensions shrink or disappear. New York's public workers can retire at age 55 with guaranteed benefits. They have to contribute to their retirement plan for only their first 10 years on the job, and they pay no state income taxes on their pensions. Compared with the average New York worker, state and local government employees receive the gold standard of pensions. In 2009, New York is estimated to lose $776 million in income taxes because pensioners are exempt — much needed money considering the state faces an estimated $13 billion budget gap.

These are problems faced in Europe, Britain and America not only at a local level but with even more severity at a national level. It is very difficult for governments to deal with these issues generally because the very interest groups that used government power to build up these sorts of benefits are loath to respond to pressure to moderate what was been created. Here's some additional reporting from the article excerpted at the beginning of this report.

Mark Wallace, campaign director of the Taxpayers' Alliance said: 'This is a massive bill for just one official in one quango. Once these bodies are removed from democratic control, they are free to start splashing huge amounts of money around.' Liberal Democrat justice spokesman David Howarth, who is campaigning against overpaid public sector consultants, added: 'It seems difficult to justify this level of expenditure given the funding constraints imposed on the criminal justice system.' This year, the Youth Justice Board received public funding of £495million, of which £22.8million was spent on its 320 employees. Mr. Mackay is on a three-and-a-half week summer holiday and was unavailable for comment.

Over and over, when one analyzes the costs involved with the public sector, the majority of the outlays have to do with salary and benefits while cuts are often aimed at the services that are purportedly provided. Essentially, governments at almost every level are large patronage mills, supported not so much by taxes as by an endless flow of paper money. Yes, it is fiat money printed by central banks that makes possible both government berths and sprawling private sector companies – especially in the financial services industry – that are so highly regulated and broad-based as to resemble extensions of the governments with which they interact.

When one steps back from the tentative, equity driven "recovery" that the West is supposedly undergoing, the prospect of a public-sector melt-down is high on the list of difficulties that Western societies will probably face over the next few years. The two bubbles that central banks support endlessly are banking (the distribution system) and government itself (the enabler and protector of the current system).

While banking can be bailed out by secretive, central banking loans, etc., it is more difficult to keep vast Western governments afloat when the economy itself is stalled or retreating. The generalized chaos of the private sector when married to the unsupportable profligacy of the public sector is one more reason why we believe the current system is untenable and the tensions unresolvable. Another reason to believe that a precious metals monetary standard of some sort is inevitable.