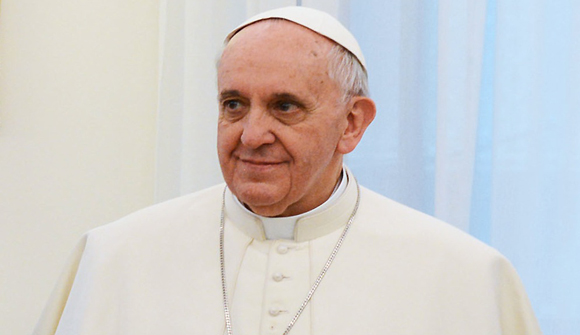 STAFF NEWS & ANALYSIS
The Pope without a Country
By Philippe Gastonne - September 25, 2015

Pope Francis, a son of immigrants making history's first papal address to the U.S. Congress, implored America's leaders on Thursday to accept immigrants as their own children, putting aside political differences to embrace those who "travel north in search of a better life."

In a speech that gently but firmly urged Americans to move beyond the partisan paralysis that year after year has prevented Congress from making progress on immigration reform, the pope wrapped traditional Catholic teachings into a celebration of American icons, including Abraham Lincoln and Martin Luther King Jr., drawing lessons from their work as he urged Congress to spurn the modern tendency toward polarization.

"Each son or daughter of a given country has a mission, a personal and social responsibility," the pope said in heavily accented English. "Your own responsibility as members of Congress is to enable this country, by your legislative activity, to grow as a nation." – Washington Post, Sept 24, 2015

We do not know what Pope Francis and President Obama discussed during their 45-minute private Oval Office meeting this week. It would be nice if he heard Obama's confession, but they would likely have needed more time. Their conversation, whatever it was, will remain off the record.

The pontiff's visit to the belly of the beast, Capitol Hill, was very much on the record. Both parties had reason to both welcome and dread his message. On social issues like abortion and same-sex marriage, he is in full alignment with Republicans. On climate change, immigration and social welfare, he is right in tune with Democrats. Members of both parties gave the pope polite applause when he said something they liked, and then went back to politics as usual.

In one respect, Pope Francis has more in common with libertarians and anarchists. Like us, he does not fit neatly into a predefined political box. This does not stop people from shoving him into whichever box they think he should occupy.

The pope views issues like immigration as moral, not political. He does not see justice in forcing people to remain within borders that long-dead rulers drew for their own selfish reasons. At the same time, he urges everyone to love and respect their neighbors. On this one point, at least, his ideal sounds much like the world many anarchists would like to see.

You might even say Pope Francis lives in his own personal anarchy. As a diplomatic matter, he represents the Holy See – not the Vatican city-state, as most people think. The Holy See is not a geographic place. It is the chair of St. Peter, which just happens to be in Rome because Peter's current successor lives there.

Other rulers have long recognized the Holy See as equivalent to a sovereign state, even in times when popes controlled no territory. Pope Francis is literally a nation of one. By his very existence, he proves that external government isn't always necessary.

Would Obama or Congress grant the rest of us that same respect? Of course not, but we can always dream. Pope Francis would suggest we pray for it, too.