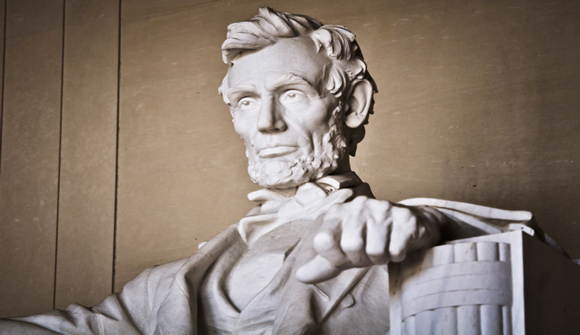 Well, we knew it was bound to happen sooner or later.

Last week a handful of students at the University of Wisconsin-Madison called for a statue of Abraham Lincoln to be removed from the campus.

Unlike other more ‘controversial’ Lincoln statues that portray him breaking the chains of slavery, this one simply shows Lincoln sitting in a chair.

But it’s offensive, say the students. And they want it removed.

As I wrote to you a few weeks ago– nearly EVERY American historical figure, including Lincoln, George Washington, Benjamin Franklin, all the way down to Amerigo Vespucci (for whom the American continents are named) was either a slave owner or a white supremacist.

Lincoln told the audience during a Presidential debate in 1858, for example, “I am in favor of the race to which I belong having the superior position.”

Clearly such a view does not express our modern sentiments.

According to one especially erudite student leader, “I just think [Lincoln] did, you know, some good things…the bad things that he’s done definitely outweighs them. . .”

And poof, judgment has been rendered: Lincoln’s flaws outweigh his achievements. So let it be written.

This, of course, is the problem with monuments. They tend to commemorate human beings… those flawed, complicated sacks of meat who are paradoxically full of accomplishments… and shortcomings.

Even some of the most exalted historical figures, including Lincoln, were highly imperfect. Nobody’s legend ever survives real scrutiny.

Martin Luther King was a philanderer whose treatment of women would not hold up to modern #metoo views.

John F. Kennedy’s womanizing was so severe that he refused to fly back home from a Mediterranean vacation (with a mistress) after his wife gave birth to a stillborn baby.

Gandhi severely mistreated his wife and routinely slept naked with children in his bed.

Albert Einstein’s personal diary reveals a number of statements he made that would be viewed today as extremely racist, like saying Chinese are “more like automatons than people.”

And Barack Obama committed the most egregious sin of all when he said that “all lives matter.”

But the entire point of a monument isn’t to claim that every moment of every day of that person’s life was virtuous.

The idea is to commemorate achievement, and what that achievement stands for.

The Marine Corps War Memorial in Washington DC famously depicts six Marines raising a US flag on Mount Suribachi during the Battle of Iwo Jima in 1945.

The monument doesn’t mean that those six Marines were flawless human beings; it’s intended to memorialize the achievements and sacrifice of all Marines who died in service.

Mnemosyon was the mother of inspiration. And in many respects, that’s the point of a monument: inspiration.

From its Latin root, monument comes from the word ‘monemus’, which means ‘to remind,’ or ‘to warn’.

So in addition to inspiration, monuments may also serve as a reminder and warning about our mistakes of the past so that we are not doomed to repeat them.

As an example of this context, in the late 1500s at a time when most academic works were published in Latin, Sir Francis Bacon opened a chapter of one of his books with “primo monemus ex scriptoribus”

The translation is “First, the authors warn . . .”

“Monemus” = “to warn”. And then Bacon went on to warn readers that the ideas presented in his book may, in fact, be offensive.

Bacon lived in a time when intellectual dissent was met with censorship, persecution, and even death.

This is not so different than today.

Intellectual dissent is simply not tolerated. You cannot engage in civil discourse about areas where you agree, and areas in which you disagree.

Today’s Jacobian mob has appointed itself judge, jury, and executioner. And that’s not an exaggeration. Violence does occasionally ensue.

One member of the Twitter mob recently posted a video claiming that she wanted to stab anyone with the nerve to say that all lives matter.

NFL quarterback Drew Brees received death threats because he stated that he didn’t want to disrespect the flag.

These are not isolated incidents.

Personally I have no regard for most monuments and find it odd that so many Confederate leaders have been commemorated in bronze.

But I care deeply when people try to erase the past… or to change vocabulary… or destroy intellectual dissent… simply because someone who has been dead for hundreds of years did not live up to modern values.

The sole exception to this rule seems to be Joe Biden.

This alone would be enough for anyone else to be canceled.

But on top of this, Uncle Joe sponsored a racist bill in the 1970s, early in his Senate career, that would have limited the federal government’s power to enforce school desegregation.

Biden has also praised a former KKK leader, Robert Byrd, as a “friend” and “mentor”, and even just last year he bragged about how well he was able to compromise with racist, segregationist politicians in the 1970s and 80s.

None of this matters about Joe Biden. He gets a pass, simply because he’s not Orange Man. But Abe Lincoln? The guy who freed the slaves? He’s OFFENSIVE! Rip his statue down!