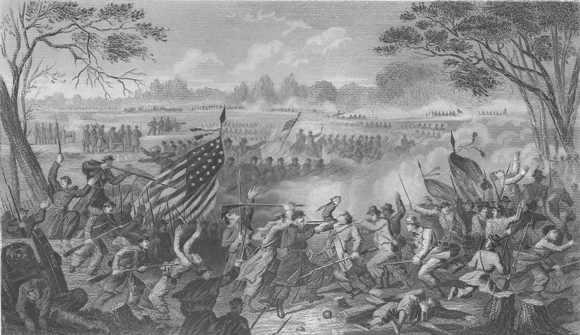 What, then, did occur during that half decade? Some call it “the unpleasantness of 1861.” A more narrow and accurate description would be “The war between the states,” or “the war to prevent Southern secession.” As a pejorative, there is that old standby: “The war of northern aggression.”

Why so? Why not follow the usual practice and characterize this historical episode as “The civil war?”

That is because a civil war is a conflagration between, typically, two parties, each in control of a part of a country, both of which seek to rule over the entire nation. The Spanish Civil War of 1936 was indeed a civil war. Each of the contending parties, the Nationalists (Fascists) under Francisco Franco and the Republicans (Loyalists) under Francisco Largo Caballero and Juan Negrín, sought to rule all of Spain.

A similar occurrence took place in Russia in 1917. The Red (Communist) and the White (Czarist) armies battled for control of the entire country. The same pattern took place in China from 1927 to 1937 and from 1945 to 1949. It pitted the Communist (CCP) lead by Mao Zedong against the Kuomintang (KMT) led by Chiang Kai-shek. We all know how that one ended but both sides contended for sovereignty over all of China.

If, ever, Quebec violently separates from Canada, or the Basques from Spain, or Scotland from England, or Texas from the U.S., those will all be secessionist wars, not civil wars. Why? Because Quebec does not aim to rule over all of Canada, nor the Basques all of Spain nor Scotland over the entire United Kingdom, not Texas over all of America.

This being the case, why is it that the war of 1861 is commonly characterized as a “civil war?” This can only be speculative, but several explanations arise for this omnipresent obfuscation and mislabeling of this important historical event. One of them is based on the fact that history is almost always told by the winning side. Sometimes, often, they deem it to their best interest to blatantly lie about the reasons for their participation. The myth commonly bruited about is that the north wanted to end the evils of slavery, the south to perpetuate them.

The undeniable brute fact is that the south had no intention whatsoever to rule the north. Their motive, instead, was to separate from those colonies and from the central government. Why did they wish to secede? Under northern influence it almost seems as if the only reason anyone would ever wish to depart from a political alliance would be to support slavery. Of course, this “curious institution” played no role at all in the wars over secession in Russia in 1917 or in Spain in 1936, nor do they figure in at all in the possible modern-day departures of the Basques or Quebec.

Actually, the first secession movement that occurred in the U.S was in opposition to slavery, not in support of it. In 1825, a group of abolitionists in Massachusetts threatened to secede from the U.S., since slavery existed then. This undermines the notion that the north was the “good guy” and the south the bad guy, even in 1861. At that time, this despicable practice functioned on both sides of the Mason-Dixon line.

Then, too, the first ruling under his administration to free the slaves was limited to the north. The Emancipation Proclamation of 1863 did so, only, for those in “the rebellious areas.” That is, in case you are not paying attention, this new freedom was limited to those held in the south! If eradicating slavery was even of the slightest importance to him, it is difficult to understand this lacuna.

It can hardly be doubted that ensuring the continuation of slavery played some role in the southern decision to depart from the union. Possibly, the tariff of abominations, an even stronger role. But motive is irrelevant. The key ethical element is that refusal to allow someone to politically divorce from you is akin to nothing so much as kidnapping. All human relationships should be mutually agreeable. No one should be able to force anyone else to associate with him against his will.

Needless to say, but it must be said in any case, slavery is a particularly vicious evil. This must be said since anyone casting aspersions on northern behavior during this war is in danger of being accused of supporting this monstrous institution.

Are wars of secession justified? The very strong presumption is that they most indeed are. This stems from the libertarian law of free association. No one should be compelled to associate with anyone else. So, the secession of the thirteen colonies from Great Britain in 1776 was defensible as was the attempt of the South to secede from the north.

What extent of secession should be legally appropriate? Down to the individual person.

If New York State wishes to secede from the United States, they have every right to do so. Ditto, if New York City wishes to depart from the Empire State. But suppose the residents of Manhattan wish to have nothing further to do with the other four boroughs. Would they have the right to leave? Certainly, yes. But the same goes for the upper west side from Manhattan, and any square block from the upper west side, and, also, any individual who no longer wishes to be politically associate with that square block.

On the issue of the Civil War, I am a student of my friend and many times co-author, Tom DiLorenzo. I highly recommend anything and everything he has written on this issue (or anything else he has published for that matter), especially including these:

DiLorenzo, Thomas. 1998.  “The Great Centralizer; Abraham Lincoln and the War between the States,” and The Real Lincoln: A New Look at Abraham Lincoln, His Agenda, and an Unnecessary War (Amazon affiliate link).