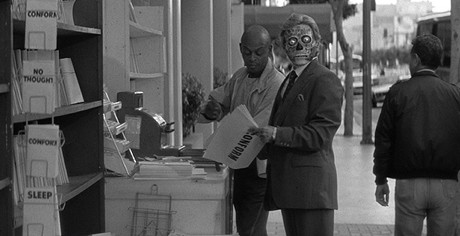 STAFF NEWS & ANALYSIS
They Live, We Sleep: Beware the Growing Evil in Our Midst
By John W. Whitehead - October 28, 2019

“You see them on the street. You watch them on TV. You might even vote for one this fall. You think they’re people just like you. You’re wrong. Dead wrong.” — They Live

We’re living in two worlds, you and I.

There’s the world we see (or are made to see) and then there’s the one we sense (and occasionally catch a glimpse of), the latter of which is a far cry from the propaganda-driven reality manufactured by the government and its corporate sponsors, including the media.

Indeed, what most Americans perceive as life in America—privileged, progressive and free—is a far cry from reality, where economic inequality is growing, real agendas and real power are buried beneath layers of Orwellian doublespeak and corporate obfuscation, and “freedom,” such that it is, is meted out in small, legalistic doses by militarized police armed to the teeth.

All is not as it seems.

This is the premise of John Carpenter’s film They Live, which was released more than 30 years ago, and remains unnervingly, chillingly appropriate for our modern age.

Best known for his horror film Halloween, which assumes that there is a form of evil so dark that it can’t be killed, Carpenter’s larger body of work is infused with a strong anti-authoritarian, anti-establishment, laconic bent that speaks to the filmmaker’s concerns about the unraveling of our society, particularly our government.

Time and again, Carpenter portrays the government working against its own citizens, a populace out of touch with reality, technology run amok, and a future more horrific than any horror film.

For instance, in Carpenter’s They Live, two migrant workers discover that the world is not as it seems. In fact, the population is actually being controlled and exploited by aliens working in partnership with an oligarchic elite. All the while, the populace—blissfully unaware of the real agenda at work in their lives—has been lulled into complacency, indoctrinated into compliance, bombarded with media distractions, and hypnotized by subliminal messages beamed out of television and various electronic devices, billboards and the like.

It is only when homeless drifter John Nada (played to the hilt by the late Roddy Piper) discovers a pair of doctored sunglasses—Hoffman lenses—that Nada sees what lies beneath the elite’s fabricated reality: control and bondage.

When viewed through the lens of truth, the elite, who appear human until stripped of their disguises, are shown to be monsters who have enslaved the citizenry in order to prey on them.

Likewise, billboards blare out hidden, authoritative messages: a bikini-clad woman in one ad is actually ordering viewers to “MARRY AND REPRODUCE.” Magazine racks scream “CONSUME” and “OBEY.” A wad of dollar bills in a vendor’s hand proclaims, “THIS IS YOUR GOD.”

When viewed through Nada’s Hoffman lenses, some of the other hidden messages being drummed into the people’s subconscious include: NO INDEPENDENT THOUGHT, CONFORM, SUBMIT, STAY ASLEEP, BUY, WATCH TV, NO IMAGINATION, and DO NOT QUESTION AUTHORITY.

This indoctrination campaign engineered by the elite in They Live is painfully familiar to anyone who has studied the decline of American culture.

In this way, the subtle message of They Live provides an apt analogy of our own distorted vision of life in the American police state, what philosopher Slavoj Žižek refers to as dictatorship in democracy, “the invisible order which sustains your apparent freedom.”

We’re being fed a series of carefully contrived fictions that bear no resemblance to reality.

The powers-that-be want us to feel threatened by forces beyond our control (terrorists, shooters, bombers).

They want us afraid and dependent on the government and its militarized armies for our safety and well-being.

They want us distrustful of each other, divided by our prejudices, and at each other’s throats.

Most of all, they want us to continue to march in lockstep with their dictates.

Tune out the government’s attempts to distract, divert and befuddle us and tune into what’s really going on in this country, and you’ll run headlong into an unmistakable, unpalatable truth: the moneyed elite who rule us view us as expendable resources to be used, abused and discarded.

In other words, we are being ruled by an oligarchy disguised as a democracy, and arguably on our way towards fascism—a form of government where private corporate interests rule, money calls the shots, and the people are seen as mere subjects to be controlled.

For the final hammer of fascism to fall, it will require the most crucial ingredient: the majority of the people will have to agree that it’s not only expedient but necessary.

But why would a people agree to such an oppressive regime?

As the Bearded Man in They Live warns, “They are dismantling the sleeping middle class. More and more people are becoming poor. We are their cattle. We are being bred for slavery.”

The characters who populate Carpenter’s films provide some insight.

Underneath their machismo, they still believe in the ideals of liberty and equal opportunity. Their beliefs place them in constant opposition with the law and the establishment, but they are nonetheless freedom fighters.

When, for example, John Nada destroys the alien hyno-transmitter in They Live, he restores hope by delivering America a wake-up call for freedom.

That’s the key right there: we need to wake up.

Stop allowing yourselves to be easily distracted by pointless political spectacles and pay attention to what’s really going on in the country.

The real battle for control of this nation is not being waged between Republicans and Democrats in the ballot box.

As I make clear in my book Battlefield America: The War on the American People, the real battle between freedom and tyranny is taking place right in front of our eyes, if we would only open them.

All the trappings of the American police state are now in plain sight.

If they live (the tyrants, the oppressors, the invaders, the overlords), it is only because “we the people” sleep.