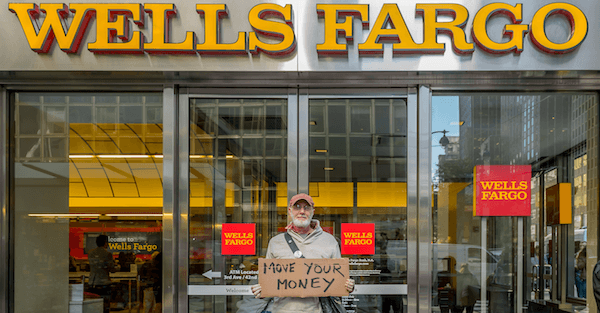 STAFF NEWS & ANALYSIS
This banking scandal is awful… even for Wells Fargo
By Simon Black - December 06, 2018

I guess none of this should surprise me anymore.

Our old friends at Wells Fargo are involved in yet another banking scandal. And this one is really bad… people wrongfully lost their homes and ended up on the street.

But before I get into the details of this particularly atrocious mishap, let’s have a quick recap of Wells’ “greatest hits.”

Back in April, Wells was hit with a $1 billion fine for selling 570,000 clients auto insurance they didn’t need and also charging mortgage borrowers erroneous fees.

By the bank’s own estimates, as many as 20,000 of those clients may have had their cars repossessed as a result of their inability to pay for the insurance Wells Fargo illegally stuck them with.

Then in October, Wells Fargo got grilled by federal regulators after recommending investment products that were “highly likely to lose value.” The bank also pushed tons of customers into higher-fee retirement accountsthat were bad for customers but more lucrative for the bank.

That same month, the bank fessed up to “erroneously” charging late fees to more than 100,000 borrowers, even though the delays were the bank’s fault.

In 2016, employees at some of Wells Fargo’s California branches got busted for selling sensitive customer info, like Social Security numbers, to identity thieves.

And in late 2016 and throughout 2017, Wells Fargo had its notorious “fake account” scandal, where its employees opened extra accounts for millions of customers so they could hit their sales goals and earn a bonus.

And then there’s the time Wells Fargo froze my account for sending a simple wire transfer.

I don’t know what else to say about Wells Fargo (and basically every other big bank) anymore… other than I’m outraged with their behavior.

This week, the bank said a “computer glitch” caused 545 of its customers to lose their homes.

The “glitch,” according to papers the bank filed with the Securities and Exchange Commission, caused the bank to incorrectly deny 870 loan modifications (around 60% of which went into foreclosure).

Basically, people asked the bank to change their mortgage to make it more affordable, and requests that should have been approved weren’t… with the process taking months before the borrower got the final “no.”

“Oh… sorry about that. Sorry you lost your house, your family and your job. Our bad… computer glitch, you know how it goes. Real sorry.”

CBS interviewed one of the victims, a guy named Jose Aguilar.

Jose fell behind on his payments after trying to fix a black mold problem in his home. He asked Wells to change the mortgage to lower his payments. While waiting for Wells to process his request, he fell further behind until the house ultimately went into foreclosure.

He and his wife split up. He had to move into a friend’s basement with his son.

Then, three years later, he got a letter from Wells Fargo saying, wait for it:

“Dear Jose Aguilar, we made a mistake… we’re sorry.”

I’m sure Jose was relieved Wells Fargo was sorry after literally ruining his life (they did give him a $25,000 check… which obviously doesn’t come close to making up for the mistake).

Once again I’ll ask… how does anyone actually do business with Wells Fargo anymore? These people are outright criminals (if you or I committed any of the acts above, we’d be behind bars).

And it’s not just Wells Fargo. Pretty much every major bank in the world has been found guilty at some point of some type of fraud.

But people still trust these criminals with their money.

The public has been institutionalized to believe you have to hold your money with a big bank.

But in reality, you have so many other choices.

Instead of holding money in a bank account, you can earn 100x more interest buying short-term Treasury Bills. You can hold physical cash or gold.

There are options to crowdfund loans of every type.

You also don’t have to trust these banks with your retirement (in fact, I hope you don’t). They limit your investment options and saddle you with erroneous, high fees for nothing.

With a little effort, you can take control of your retirement and take your money out of the hands of the major financial institutions.

If you qualify, you can open a solo 401(k) – it’s a cheap and flexible structure that allows you contribute tens of thousands of dollars each year and invest in all kinds of assets (even real estate and private equity).

You can also borrow money from your retirement account under certain circumstances.

Self-directed IRAs are also a great option (though they’re a bit costlier and less flexible).

It’s important to understand, as always, you have options… you just have to do a little more work in order to stop the abuse from Wells Fargo and the like.