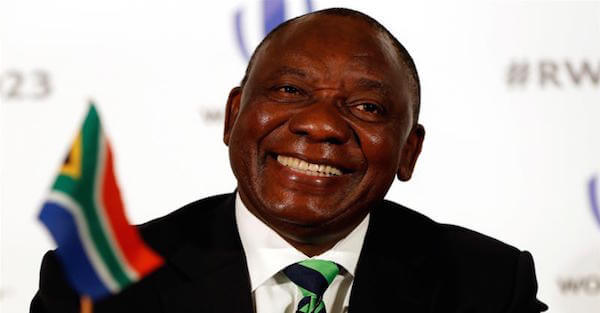 STAFF NEWS & ANALYSIS
This may be the dumbest thing that any politician could ever do…
By Simon Black - March 07, 2018

Week before last, I told you about how the brand-new President of South Africa, Cyril Ramaphosa, made an impassioned speech calling for the confiscation of real estate from white land owners.

It was a pretty remarkable thing to say during what was literally his first week in office.

You’d think the new president would take the opportunity to address more immediate, more critical issues– for example, the fact that Cape Town is about to run out of water.

Cape Town, the second largest city in South Africa (and the most well-developed on the African continent) is about to become the world’s first major city to run out of water.

The city is experiencing its worst drought in a century, one that has dragged on for more than three years. And its various dams and reservoirs are at historically low levels.

Local residents are already being rationed, including having their showers limited to two minutes.

But even with the rationing, Cape Town is still just weeks away from running out of water.

You’d think that would be at the top of the government’s list, given that their own idiotic policies caused this problem to begin with.

Social Justice has once again won the day over common sense. So they’re prioritizing the confiscation of white-owned land over critical water supply needs.

A few days ago, they took this a step further and actually passed a law authorizing the expropriation of land without compensation.

Their next move is to form an official committee to manage the process.

Now, South Africa obviously has a painful history regarding race.

And this issue of land ownership goes all the way back to the earliest European settlers who took land from the natives– something that President Ramaphosa called “original sin.”

The government’s objective is to correct this centuries-old injustice by taking land away from white owners and giving it back to its ‘original’ owners… ostensibly the descendants of native tribes.

But here’s where things become completely ridiculous. Let me give you a hypothetical example…

Let’s say a white landowner has a large property in eastern South Africa.

Even if he’s only owned the land for six months, he’s still going to be blamed for four centuries of imperialism… so his land will be confiscated by the government.

But who will become the new owner?

One of the dominant tribes in eastern South Africa is the Zulu people. So perhaps the South African government will carve up the land and give tiny parcels to members of the Zulu tribe.

But then again… the Zulu tribe conquered that region centuries ago after a bloody war with the Ndwande tribe.

So perhaps the government should give the land to the descendants of the Ndwande instead.

Except that the Ndwande had conquered the area from the Mthethwa Empire, who in turn had conquered it from the Pedi tribe (of which Julius Malema, another of South Africa’s political hot-heads, is a member).

Even the most die-hard Social Justice Warrior whose heart soars at the prospect of confiscating land from white people has to acknowledge the absurdity of stealing property from the descendants of one conqueror and giving it to the descendants of another conqueror.

And, even if it were possible to accurately determine the ‘rightful’ owners of the land, and even if the prospect of forced redistribution were a good idea, can we really trust one of the most corrupt governments in the world to fairly and transparently execute the program?

Or is there just a teeny, tiny possibility that maybe, just maybe, all this confiscated land will end up being owned by government cronies?

Another important point is that a lot of this land that the government wants to confiscate probably has quite a bit of bank debt.

Imagine– you just bought a farm for, say, 50 million rand (that’s about USD $3 million). And in order to do so, you took out a hefty loan from a South African bank.

Now the government comes along and steals your property.

Are you seriously going to keep paying the loan?

This means that the banks are going to be stuck with massive defaults and bad debts, leading to a wave of bank failures.

So in their crusade to bring Social Justice to South Africa, the government is effectively engineering a banking crisis in their country.

This is criminally stupid behavior that puts South Africa on the same path that Zimbabwe followed in the late 1990s.

And as I told you a few weeks ago, when I first reported about this land confiscation in South Africa, anyone who is dumb enough to follow Zimbabwe’s economic model absolutely deserves what they’re going to get.