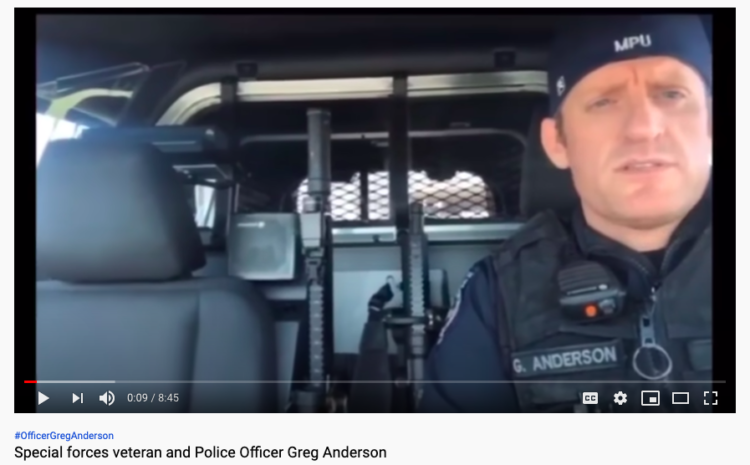 Not all cops are dirty. But the clean ones don’t seem to stay cops for long.

On May 5, 2020, Port of Seattle police officer Greg Anderson posted a video to Instagram with the caption, “Many officers out there are trampling on people’s liberties. Ask yourself are you doing the right thing?”

In the video, he blasts the erosion of constitutional rights under various Coronavirus lockdown orders.  He reminds his fellow officers that individual rights trump governmental decree.

Commenters praised Anderson’s commitment to both the constitution and natural rights—especially given his duty to preserve both.

Even his own command praised the message.

But just a few hours later, they told him to take it down.

As the video went viral, Anderson got a call from his command saying, “Hey Greg, the video is up to 400,000 views, it’s time to pull the plug on this thing.”

But if the message was true, Anderson asked, why stop it from spreading?

“Why would we want to pull the plug on something that was already acknowledged as a good and powerful message from one law enforcement officer, to others?”

Shortly after Officer Anderson refused to remove the video, the Port of Seattle police department suspended him. They started an investigation into if Anderson violated department policy by using social media while in uniform.

Anderson was eventually fired for refusing to take down the video.

He made another video explaining exactly why he refused to yield to the pressure.

Anderson’s commander said he had been told by higher-ups that the video would have to come down. He asked Anderson if he would comply, and remove the video.

“I said no, I can’t take the video down. Because if you listen to my first video, the whole message that I was trying to share with people, and impart on them, is that if you believe in something in your heart you have to stand by that conviction even if it costs you everything.”

For officers with families or loved ones to care for, that’s often not a risk worth taking.

But Anderson said, “after putting that message out there, and sharing that with America, and it was so well received, I can’t then just say, even though that’s what I believe, I’m going to take a step back, I’m going to retract my words, and I’m going to allow my command to prevent me from sharing my heart and my truth. So I said with that in mind sir, I can’t take the video down.”

After being fired from the department, his friends launched a Gofundme which has raised over $430,000.

But the problems Anderson highlighted will remain and more good cops will be cast aside.

If an officer’s duty is to protect rights, why not allow him to brandish departmental paraphernalia while evangelizing their merits? It associates policing with the higher-order goals of a free society.

But therein lies the issue: To be a police officer in these United States, you needn’t be valorous or virtuous, or even philosophically consistent. You just have to be wholly obedient to the existing power structure.

Indeed, many jackboot law enforcers have used COVID-19 to trample Americans’ rights with impunity on behalf of their bosses—the elite, upper echelon of the law enforcement hierarchy and the politicians who cover for them.

And yet, in this instance, when a good cop speaks up he’s censured and cast aside by the system. For as long as this lasts, perceptions about police officers and their intentions will remain shrouded in scorn, suspicion, and doubt.

Understanding the role of political power is certainly the key to Anderson’s overall argument. In his Instagram video, Anderson argues that his fellow officers “don’t have the authority to do those things to people just because a Mayor or a Governor tells you otherwise.”

Principally, Anderson is correct. His sentiments reflect the mindset of many freedom movements that shaped America, the notion that right and wrong stand independent of established authorities.

But this is not the guiding principle of the modern American law enforcement infrastructure. Similar to soldiers in the military, police officers follow orders. When a governor or mayor issues an executive order or ordinance, it has the force of law. From that point on, officers are enabled to enforce what is temporarily considered law.

For example, Pennsylvania state police decided to keep persecuting business owners who disobey the Governor’s orders, despite several District Attorney’s saying they will not pursue any charges. That’s a shame. The ringmaster of this circus said jump, so his baton-wielding jesters said “How high?”

If officers are loyal to nothing but the whims of their bosses, none of us are safe.

Greg Anderson is a reminder to all of us: Good cops exist, but if they stand by their convictions, they often don’t remain cops for long.

Christian Watson is a political writer based in Georgia and host of the Pensive Politics podcast. He can be found on Twitter at @OfficialCWatson.