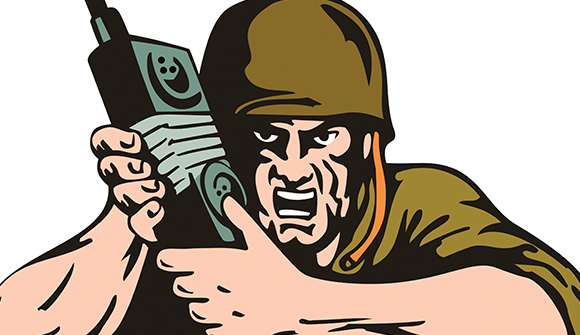 The events that led to the Egyptian army's removal of President Mohamed Morsi confronted the military with a simple choice: intervention or chaos. Seventeen million people on the street is not the same as an election. But it is an awesome manifestation of people power. The equivalent turnout in Britain would be around 13 million people. Just think about it for a moment. The army wouldn't intervene here, it is true. But the government wouldn't survive either. The Muslim Brotherhood was unable to shift from being an opposition movement to being a government. Of course governments govern badly or well or averagely. But this is different. The economy is tanking. Ordinary law and order has virtually disappeared. Services aren't functioning properly. Individual ministers did their best. – UK Guardian

Dominant Social Theme: War seems necessary. There, or there … or there.

Free-Market Analysis: War. Somewhere. Regrettable but necessary. This is what Tony Blair is telling us in this lengthy and merciless article that recently appeared in the (increasingly schizophrenic) UK Guardian newspaper.

We call the article merciless not because of its bellicosity but because of its tone. Tony Blair has been pilloried throughout Britain for enmeshing the country in needless wars, specifically those in Iraq and Afghanistan. He's been forced to duck in and out of the back door at various official functions, is heckled when he speaks and cannot even travel abroad for fear of being arrested on war-crime charges.

And here, in this most leftist of major UK newspapers, we have a well-crafted article demanding what appears to be further war throughout the ENTIRE Middle East.

That's the merciless part. There simply is no give in this man. He exhibits – at least in this article – not an ounce of sincere regret for items that he has, in fact, regretted publicly in the past. He plunges forward like, well … like EU regulators insisting on austerity, explaining that the iron rigor of their leadership simply rejects consideration of any other course.

So too with Blair. He sees absolutely nothing in the region but increased Western military involvement. How he expects to muster support short of setting off a Third World War is a puzzle to us. But he seems confident … mercilessly so.

It is, astonishingly enough, a variant of the White Man's Burden that he is enunciating with clarity and confidence. We are old enough to remember the "Hippie Sixties" and Blair's current announcement would have met with extreme derision back then. Today, well, we will see …

Here's more from this incredible editorial:

… Now the army is faced with the delicate and arduous task of steering the country back on to a path towards elections and a rapid return to democratic rule. We must hope that they can do this without further bloodshed. Meanwhile, however, someone is going to have to run things and govern. This will mean taking some very tough, even unpopular decisions. It is not going to be easy.

What is happening in Egypt is the latest example of the interplay, visible the world over, between democracy, protest and government efficacy. Democracy is a way of deciding the decision-makers, but it is not a substitute for making the decision. I remember an early conversation with some young Egyptians shortly after President Mubarak's downfall.

They believed that, with democracy, problems would be solved. When I probed on the right economic policy for Egypt, they simply said that it would all be fine because now they had democracy; and, in so far as they had an economic idea, it was well to the old left of anything that had a chance of working. I am a strong supporter of democracy. But democratic government doesn't on its own mean effective government.

Today, efficacy is the challenge. When governments don't deliver, people protest. They don't want to wait for an election. In fact, as Turkey and Brazil show, they can protest even when, on any objective basis, countries have made huge progress. But as countries move from low to middle income status, the people's expectations rise. They want quality services, better housing, good infrastructure, especially transport. And they will fight against any sense that a clique at the top is barring their way.

This is a sort of free democratic spirit that operates outside the convention of democracy that elections decide the government. It is enormously fuelled by social media, itself a revolutionary phenomenon. And it moves very fast in precipitating crisis. It is not always consistent or rational. A protest is not a policy, or a placard a programme for government. But if governments don't have a clear argument with which to rebut the protest, they're in trouble.

In Egypt, the government's problems were compounded by resentment at the ideology and intolerance of the Muslim Brotherhood. People felt that the Brotherhood was steadily imposing its own doctrines on everyday life. Across the Middle East, for the first time, and this is a positive development, there is open debate about the role of religion in politics. Despite the Muslim Brotherhood's superior organisation, there is probably a majority for an intrinsically secular approach to government in the region.

… So what should the west do? Egypt is the latest reminder that the region is in turmoil and won't leave us alone, however we may wish it would. Disengagement is not an option, because the status quo is not an option. Any decision not to act is itself a decision of vast consequence. At its crudest, we can't afford for Egypt to collapse. So we should engage with the new de facto power and help the new government make the changes necessary, especially on the economy, so they can deliver for the people.

In that way, we can also help shape a path back to the ballot box that is designed by and for Egyptians. As for Syria, when we contemplate the worst that can happen, we realise that it is unacceptable. We could end up with effective partition of the country, with a poor Sunni state to the east, shut out from the sea and the nation's wealth, and run by extremists. Lebanon would be totally destabilised; Iraq further destabilised; Jordan put under even greater pressure (which only the courage and leadership of the king is presently managing on behalf of all of us). And what was left for Assad to govern would be dependent on Hezbollah, a terrorist organisation, and Iran.

As for Iran, maybe the new president wishes to try to bring his country to agreement with the world on Iran's nuclear weapons ambition. Maybe he doesn't. And in any event the power is still with the ayatollah. We can't afford a nuclear-armed Iran.

And we haven't even mentioned the challenges of Libya or Yemen or, further afield, Pakistan, or the plague of extremism now coursing through the northern part of sub-Saharan Africa or parts of central Asia. Our interests demand that we are engaged.

Please read these last few grafs again, dear reader. It is the windup of Blair's reason for writing. He wants to remind Britain and the Western world generally that it is not in the West's interests – particularly not Britain's – to allow events to "spin out of control" in Egypt – or in Syria, Jordon, Iraq or Iran.

Having helped a good deal with sociopolitical and economic destabilization in this tortured region of the world, the former prime minister now reminds his electorate that the only remedy may be wider war, much wider.

We write "much wider" because this is the world's navel and both Russia and China may be inextricably drawn into this quagmire. Of course, we don't think for a moment that the top leaders of either country are averse to Blair's pronouncements. Top men are never averse to war so long as they are not directly involved and do not experience direct consequences.

But Blair has written a manifesto for a kind of "total war" in the Middle East and its implementation would surely risk an even wider conflagration. Wasn't this how World War I started?

We've always written that a world war would be an impossibility due to the advent of nuclear weapons. But judging from this shocking editorial, that doesn't seem to be a concern.