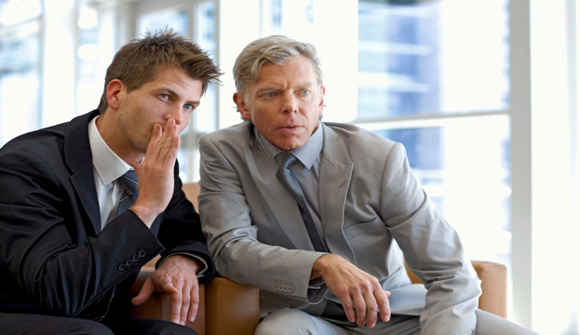 When it comes to transparency, this year's Bilderberg summit fails in every way imaginable. Three prime ministers, two foreign ministers, one president, no press conference. No public oversight. Just a bunch of senior policymakers locked away for three days with some incredibly powerful corporate lobbyists, discussing subjects intimately related to public policy. Subjects such as "globalisation" and "current economic issues", which in practical terms mean the giant trade deal, the Transatlantic Trade and Investment Partnership (TTIP). – The Guardian, June 14, 2015

The secretive Bilderberg group held its annual conclave at an Austrian mountain resort last weekend. As the Guardian article says, the event was private in every imaginable way. Invited guests only, Chatham House rules, everything off the record and certainly no media present.

It turns out some media were present, though. The organization published a participant list on its web site. A quick review shows names like Andrew Coyne of Canada's National Post, Bloomberg Editor-in-Chief John Mickelthwait, Economist Editor-in-Chief Zanny Minton Beddoes and Martin Wolf of the Financial Times.

Will insight from the conference find its way into those publications? Perhaps so, but only that which fellow participants wish to be revealed.

However, one name on the list truly is a security risk. He is a confirmed leaker, someone who betrayed his nation's confidence by revealing military secrets in exchange for sexual favors, and who pled guilty to doing so.

If you were in charge of Bilderberg security, would you let such a person under the Cone of Silence? You would, apparently, if the leaker's name is David Petraeus.

General Petraeus is the former military leader and CIA Director who gave highly classified information to the "biographer" with whom he had an extramarital affair. He now works for private equity firm Kohlberg Kravis Roberts. Chairman Henry Kravis also attended Bilderberg, so presumably he wanted Petraeus there.

Will Petraeus spill the beans? Probably not, nor would it matter if he did. If Bilderberg ever was the one-world conspiracy meeting some people think, it is certainly no such thing now. The participant list is much too long, and includes too many people with varied motives, to believe anyone would reveal their evil plans there.

This doesn't mean no evil plans exist, just that the plotters hatch them at smaller, less celebrated gatherings. Bilderberg has a different purpose. Maybe it gives the true insiders a chance to size up prospects for inclusion in the inner circle.

The Bilderberg group's biggest secret may be one they hope no one ever learns: Its attendees are collectively no smarter than any other group. They know the world believes otherwise – and that's exactly what they want.