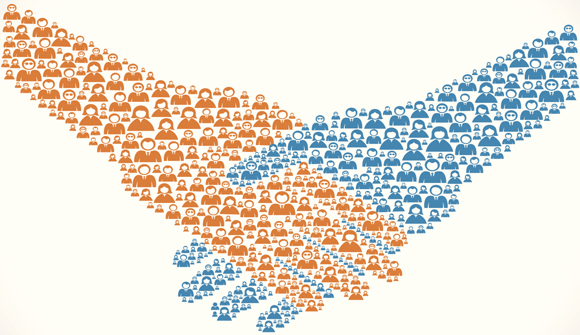 A grand Tory-Labour coalition might be good for British business … A Conservative-Labour government is unlikely. But, were it to happen, the worst excesses of the two main parties might cancel each other out … – UK Telegraph

Dominant Social Theme: What we need mostly is wise leaders, not party politics.

Free-Market Analysis: The technocracy meme constantly reemerges. In this case we know why. UKIP, the quasi-libertarian, anti-EU party, is emerging as a potential political winner and many in British leadership are aghast.

Solution? Combine forces. This is an idea constantly being propounded on both sides of the pond. Bloomberg himself – of Bloomberg media – is a big proponent of electing the best "leader" not a party representative. So is former New York Mayor Rudy Giuliani.

This approach grants that regulatory democracy itself is appropriate as is, with all its complexity and monopoly mercantilism. The idea is that the "solutions" merely need to be refined, and this can be done by the "best man" of either party.

What if the coin lands on its side?

When the Conservative Party and Liberal Democrats formed a coalition government after the last general election, it was assumed to be a short-term hiatus before the decades-long duel between the Tories and Labour resumed. But the share of the vote commanded by these two parties has eroded to such an extent that coalitions may now be a fact of British political life. Indeed, things have become so bad that a previously unthinkable possibility is beginning to raise its head: the Conservatives and Labour might be forced – for the good of the country – to go into coalition with each other.

And here's the thing: were such an (admittedly unlikely) alliance to form, it might – from a business point of view – be a consummation devoutly to be wished. For one thing, it would keep Ukip and Scottish National party hands from the tiller of state. For another, the worst excesses of the two main parties might cancel each other out. Conservative ministers would prevent their Labour colleagues from embarking on an anti-business crusade; Labour would surely demand the Tories ditch their promise of a referendum on membership of the EU as a prime condition of coalition.

The debate between the Tories and Labour over deficit reduction has at times resembled the squabble between Lilliputians about which end of a boiled egg to break; in essence the spending plans of the two parties amount to the narcissism of small differences. One would imagine that, if push came to shove, the two parties would find a way to muddle through.

True, this intriguing thought experiment raises more questions than it answers. Who, for example, would be Prime Minister? Having led their respective parties to such an imbroglio, both David Cameron and Ed Miliband would surely be forced to fall on their swords. Could a compromise candidate be found?

Indeed, the odds are stacked against May's vote producing a so-called "Grand Coalition" between the country's two main parties. And, even if it did, the chances are that the combination would prove too politically unstable to last a full Parliamentary term – at least this time around.

Nevertheless, it says something pretty damning about the UK's two main political parties that the best hope for British businesses is that general election produces a situation in which the Tories and Labour effectively end up nullifying each other.

This last paragraph claims that the "best hope" for British business is a grand coalition between the two parties, albeit for cynical reasons. But what does this say about British business?

It certainly indicates, according to this commentator anyway, that British business favors an environment of ever higher taxes, regulation and price inflation. Also, a country second only to the United States in terms of military bellicosity.

A country so suspicious of its own citizens that it has left almost no space unused when it comes to placing surveillance cameras in its bigger cities. A country that basically forbids its own people from using guns in self defense, even in the case of a home invasion. A country that is led by its largest banking firms and private shareholders out of London and uses a variety of methods to distract from the reality of power structure.

Most of all, this is a country, according to the writer, whose business elites favor the leadership of unelected Eurocrats operating at a distance out of Brussels piling up regulations that further weigh down the entrepreneurial and trade classes.

Of course, this may be just the point. The EU's regulatory weight falls disproportionately on middle classes and small businesspeople while to a degree exempting the upper classes and financial elites that have the wherewithal to maneuver out of its way.

This is the reality that UKIP is exploiting with a good deal of skill and energy. Despite what the mainstream media says, we're not convinced that the majority of people in Britain favor the socialist morass that Britain has become, a country mired in stratified classes suffering disproportionately from the yoke of parliamentary power.

British regulations, taxes and politics are bad enough – why should the citizens of this miserable isle want to compound their woes with yet more of the same administered from Brussels?

This article is suggesting that Britain's two major, foundering parties come together to preserve the dwindling influence they have. But their influence is dwindling precisely because they represent more of what is wrong with Britain than what is right.

The Tories rule from an authoritarian stance of class privilege. Labour administers government under the spoils system, handing out perks and emoluments to the most powerful unions and private backers.

UKIP may end up no different than the leading parties, but for now it promises a real change. It stands defiantly for less government interference rather than more. For Britain, that would be a real change. In fact, change is coming to Britain whether its elites want it or not.

UKIP is the bringer of change, not the initiator. And fantasies about technocracy will likely not stem the tide.