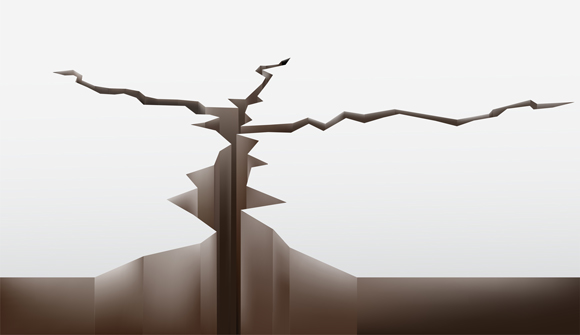 STAFF NEWS & ANALYSIS
Trump Has Split the GOP, But What About the USA?
By Daily Bell Staff - October 20, 2016

Donald Trump hasn’t succeeded in discrediting Hillary Clinton, but he has managed to tarnish one target: Paul Ryan, the top Republican office holder in the country. – Bloomberg

This Bloomberg article explains that Trump has not succeeded in “dragging down” Hillary Clinton but has effectively reduced Paul Ryan’s favorability and credibility.

The article argues, therefore, that the GOP will not be able to work with Hillary if she becomes president.

The idea is that the next few years will be an extension of the Trump candidacy. He may not win the presidency but he can influence the GOP’s response to the presidency to such a degree that much of Hillary’s agenda will be lessened or negated.

After Trump’s comments about assaulting women were aired, Ryan said he would no longer campaign for him. Before that, the speaker criticized Trump for his slurs against a Hispanic judge. Trump’s attacks on Ryan have been more personal and, as a nominee assailing the party’s top congressional leader, unprecedented.

Some Republicans are wondering if the personal damage has been such that Ryan might step aside as speaker even if Republicans, as expected, hold the House majority next month. This illustrates the bitter intra-party schisms Trump has caused.

“As a member of the Republican conference I very much hope Paul Ryan stays — he has been a very effective speaker,” Oklahoma Representative Tom Cole, a close ally, said in an interview. Cole went on to say, “As his friend, it may be best for him to wrap up business and think about his future. Paul will have a big decision to make.”

This is certainly a significant statement to make. Ryan has been “effective” but from a pro-Trump standpoint his effectiveness does not make him any more attractive to Trump or his followers.

And this makes sense. The 21st century’s exposure to the Internet has made it clear to many GOP supporters that their idea of Republicanism diverges sharply from that of GOP leaders.

What has been increasingly revealed is that the GOP is basically the foil of the Democratic Party. Economically, militarily and politically, the GOP constantly accepts Democratic “progressive” leadership. The so-called negotiations simply involve how fast the country is to be dragged leftward until it basically doesn’t exist anymore. In fact, it is fairly clear by now that the inevitable destination is indeed total destruction.

This is because the country itself is not what it appears to be. The USA contains a culture of republicanism and freedom even today. But the power resides elsewhere, mostly in London’s City. The goal of the City’s bankers generally is to create a single government ruling over putative, but ineffective states and regions worldwide. There won’t be much difference between these regional and local entities.

This metamorphosis is ongoing. Look around the world. Almost all countries have a graduated income tax and many supposedly are “democracies” and have “elections.” Most seem to have market systems at local levels, though control of money and industrial power resides at the top.

Almost all countries have monopoly central banks, either “independent” or government run. The US is similarly organized. The world is not that far away from homogenization.

But in the meantime, in the 21st century, the candidacies of first Ron Paul and now Donald Trump have offered people a big distinction between what the US has become and the rhetorical portrait of what it is … supposedly.

The Internet has allowed these candidates and others to spread an alternative viewpoint of how the US is organized and how it ought to be run. Much of this alternative vision is oriented around more vibrant free markets, entrepreneurship and freedom itself.

The Bloomberg article seems to bemoan the idea that Trump’s vision will continue to influence the GOP long after the presidential campaign is finished. But the larger issue is what impact Trump’s vision will have on the country itself.? What is going on in the US is not necessarily a political realignment but a gradual change in the way people relate to the nation. The change is much more fundamental than is being portrayed.

Within this context one can of course offer an alternative vision. It doesn’t affect the larger changes in the visions of the electorate so much as Trump himself. As we have noted, he is either courageous beyond all measure – given the nature of his criticisms – or simply, for some reason, unworried about retaliation from the “shadow government” and its banks.

It certainly seems evident, if one views the alternative media, that overt, active critics of the system have the potential of meeting violent ends. Additionally, Trump presumably owes a lot of money to banks that are part of the system he has been criticizing. Yet Trump has been more emphatic about losing a “rigged” election than about any physical threats to himself or his family.

Additionally, certainly in the last debate, he does not seem to have utilized almost any of the information revealed in recent WikiLeaks email dumps. Granted, there is not actually a great deal of overtly damning information in  these “leaks,” but certainly there is some. One wonders why Trump did not use his last appearance on a truly international stage to verbalize some of the obvious issues.

It may be that Trump, if he loses the election, will actually end up leading a GOP “revolution” in unexpected directions. Perhaps he, too, over time will end up raising considerable questions about his purpose and role. If this takes place, then his political activities, over time, will become less credible. Presumably, this would be welcomed by those organizing a larger “false flag.”

Our thought, were this to take place, is that changes embodied by Paul and Trump extend far beyond the men themselves. They will persist and expand much as similar changes did after the advent of the Gutenberg Press. The kind of consolidation that elites currently seek was tried in Sumer, Babylon and Rome. It didn’t work in Venice, either, and it won’t work today.

Conclusion: The more pressure put on people, the more they will investigate history and explore alternatives. Yin inevitably is confronted by Yang and the world turns. Of course … too bad for you, if you have to live through it. Take steps to prepare. Explore the world for yourself and trust your own eyes, not the vision of anyone else, not, even Donald Trump.