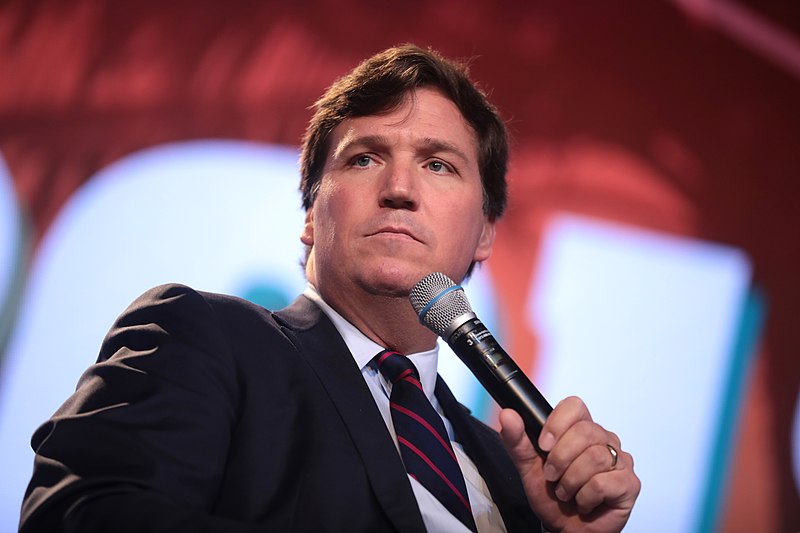 No corporate media figure is more maligned than Tucker Carlson.

Wave after wave of cancellation campaigns has attempted to oust Carlson from his position as the most popular cable news host. The left has levied every accusation of an ism imaginable. He’s been smeared alternately as a closet white supremacist, a transphobe and a Russian agent – the works.

Rule of thumb: if a public figure is accused of the above trifecta of bigotry, whether right or left, Glenn Greenwald or Carlson, they’ve struck a nerve with the corporate state.

Why throw the kitchen sink at this one figure?

Tucker gives a platform to dissident, truly marginalized voices (as opposed to “marginalized” voices in the social justice sense).

Critics often ask the leftist likes of Glenn Greenwald and Jimmy Dore why they appear on Carlson’s show. The answers they give are consistently twofold:

The only scenario in which MSNBC or CNN, for instance, would even consider granting Greenwald airtime in 2022 would be to lambaste him as a Russian agent or Trump apologist. They know they couldn’t win that fight, though, so they choose to ignore him.

The corporate state fears nothing more than unity between the populist factions of the left and right. That’s one reason it invests so heavily in waging the culture war – to erect artificial barriers that keep the rabble at each other’s throats instead of theirs.

Outside of Carlson’s 8 pm hour, Fox News’ business model is to keep its geriatric viewers entertained enough not to change the channel. They fill the stale airtime with hot air and toothless rhetoric, just to fill the gaps between ads for hearing aids, erection pills, and life insurance.

The non-Carlson Fox News content is banal and non-threatening to the power structure.

In contrast to the audience for other shows on the network, Tucker’s audience is younger, more ideologically diverse, and – most importantly – significantly more subversive.

Tucker goes for the jugular

Something snapped in Tucker Carlson’s brain roughly a decade ago. Once upon a time, he was a run-of-the-mill party-line hack on CNN who dutifully regurgitated the GOP talking points.

That was the bow-tie era Carlson, a significantly inferior incarnation than his modern counterpart.

Whatever got to him, Carlson dramatically changed his ideological positioning. Some have speculated, based on his comments, that Alex Jones drove his transition away from centrist neoliberalism/neoconservatism (two sides of the same establishment coin).

Whether the impetus for Carlson’s evolution is opportunistic careerism or heartfelt transformation is actually irrelevant.

What’s important is that, in his current form, Carlson voices truth – a rare thing on cable news – and does it vociferously.

Consider the cable news anomaly that is Carlson’s recent criticism of Big Pharma, in which he discusses its culpability in collapsed mental health:

Such an instance is most unusual because Big Pharma is a massive advertiser on Fox News, as it it across corporate media.

Pfizer was undoubtedly none too happy with Carlson’s comments in the above clip. Being savvy, he must have anticipated their displeasure — but he aired the segment anyway, which his more cowardly or indifferent colleagues would have balked at under pressure.

When’s the last time you heard Sean Hannity or Bret Baier give a full-throated critique of Big Pharma’s undue influence in American culture and politics? When’s the last time they devoted a segment to exposing the trans industry’s predatory behavior, to humanize the costs, rather than simply complaining about gender-neutral bathrooms?

The mainstream, corrupt pharma-funded GOP cucks wouldn’t touch the psychiatric medication or “medical transition” issues with a ten-foot pole, and neither would the rest of the corporate media. Tucker Carlson is alone on the stage.

Any surface-level anti-vaccine rhetoric or anti-trans rhetoric from other hosts on Fox News is just that: rhetoric. They’ll nibble around the edges. They’ll criticize mask mandates and vaxx mandates, but they’ll never expose the murderous lies of the pharma industry. Nor will they doggedly pursue the origins of COVID with any real tenacity in the same way Carlson does, to pressure the corporate state into actually acting to get to the bottom of the issue.

Tucker Carlson, in summation, is a real liability who compromises Fox News’ cozy relationship with, and its position within, the corporate state. The same can’t be said of the rest of the network.

A Houston Fox affiliate, for instance, recently censored a report in which a doctor said that he uses hydroxychloroquine to treat COVID. The executives, recorded on a phone call leaked to Project Veritas, excoriated the reporter because “[pharma] industry executives, who are the people who hire us and keep us employed” objected to the coverage. “It’s not just about the viewers, it’s about what our CEO reads,” they chided.

In their own words, the truth of how far FOX corporate bosses will go to lock down the narrative and the reporter.

They’ll stay comfortably on the surface of issues – enough to feed the boomer conservative outrage machine and keep eyeballs. But they’ll never dive deeper in sufficient detail to understand who is pulling the political and cultural strings and why.

Fox News – which ironically itself enforces vaccine mandates at its headquarters even while marketing itself as pro-freedom — is a standard corporation, not appreciably different from NBC or ABC. Its Manhattan staff is mostly neoliberal/neoconservative in political orientation. The board is most interested in generating revenue, not improving the American political landscape.

Rest assured that, behind the scenes, advertisers and executives at Fox News exert enormous institutional pressure to get rid of Carlson. If he were anyone else, Tucker would have been gone years ago.

The dilemma for Fox News is that he generates eyeballs, and thus pads its bottom line. Beyond that, he’s nearly an institution unto himself. Without Carlson, Fox News would hemorrhage viewers.

That fact alone is why he retains his position. If Carlson were disposable to Fox News, he would have been disposed of long ago.