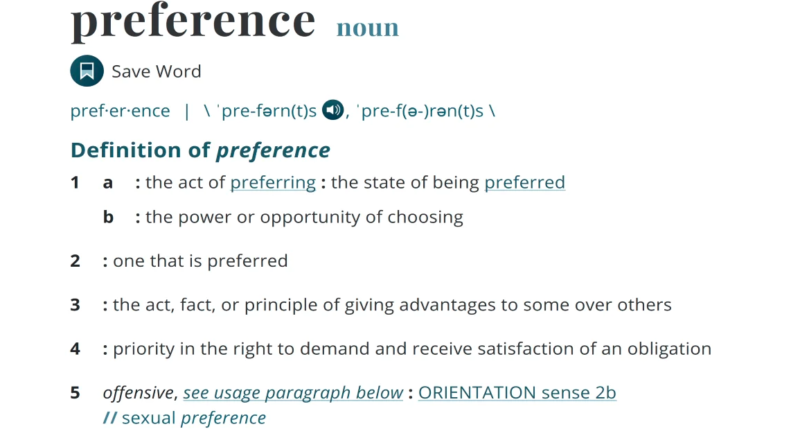 For a long time, the terms “sexual orientation” and “sexual preference” have been used interchangeably without controversy.

That all changed in an instant when Judge Amy Coney Barrett said “sexual preference” during her Supreme Court nomination Senate hearings.

Judge Barrett apologized and said that was not her intention.

And to help them make their case, Merriam-Webster changed their entry of the word “preference” in the dictionary to include a definition that it is “offensive”.

Of course, the hypocrisy of the Twitter mob is never too far off. The liberal Supreme Court Justice Ruth Bader-Ginsberg, for example, used the term “sexual preference” as recently as 2017 without any controversy whatsoever.

Something tells me they won’t be ripping down her statues anytime soon.

You’ve probably heard by now that the New York Post ran a story this week which, to put it mildly, was very unflattering for a certain US Presidential candidate and his family.

Facebook limited distribution until it could be fact-checked, and Twitter completely blocked the URL from being shared.

It’s a pretty sad state of affairs when the big technology companies, who are supposed to exist to facilitate free and open communication among users, have turned into totalitarian censors, deeming in their sole discretion what the truth is.

They hold the same standard for Covid-related content; if you dare utter a word that doesn’t conform to guidelines published by the World Health Organization (i.e. the guys who are in the pockets of the Chinese Communist Party), then you’ll be censored or banned from their platforms.

The Catch-22 of Woke Racism

Residential Assistants, or RAs, are college students who enforce rules in college dorms and act as a resource for younger students.

We’ve seen this sort of thing before, where colleges segregate students in the name of “safe spaces.”

But this time, the White RAs were given a list of 41 “common racist behaviors and attitudes of white people.”

And you wouldn’t believe some of the behaviors that apparently make you racist.

For example, asking a person of color to repeat themselves is racist.

If you believe there is a right way to do something, that is automatically racist because, according to the document, the “right way” really means the “white way.”

The document cited plenty of other racist micro aggressions, but among the most amazing were the impossible double-standards.

Number 35 on the list, for example, says that aggressively confronting a racist White person is itself a racist tactic because it’s an attempt to distance yourself from racism.

But number 39 says it is racist to “avoid confronting other whites on their racist attitudes and behaviors.”

So, just to be clear, if you confront someone else for being racist, then you’re racist. But if you don’t confront them, then you’re also racist.

Of course not. But that’s woke logic for you.

More People Arrested for Marijuana than All Violent Crimes

Now, 11 states have legalized recreational marijuana use, and 33 allow some sort of medical use of cannabis.

Yet a just-released report from the federal government shows that, in 2019, more people were arrested for marijuana-related crimes than all violent crimes put together.

According to the FBI uniform crime reports, almost 546,000 people were arrested in 2019 for cannabis related crimes. And 92% of those arrests were for simple possession– not selling, not growing, not driving under the influence–just having weed.