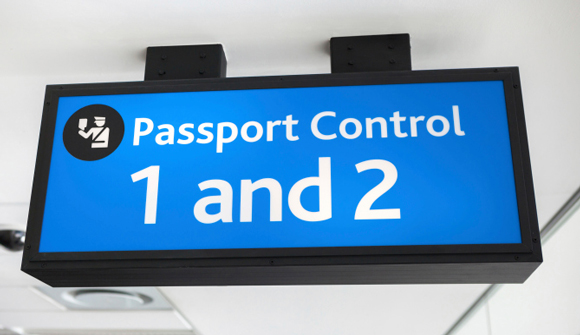 Speed Screening for Troops proves that TSA protocol is just Security Theater … The Transportation Security Administration has recently expanded what it calls "expedited security screening", more commonly known as TSA Pre-Check, to military service members at more than 100 airports across the United States. These so-called expedited screenings will allow military personnel to keep their footwear on as well as light outerwear while proceeding through security. Additionally, they can keep their laptop in its case, and keep their compliant liquids/gels bag in a carry-on item at select screening lanes. – Ingenuous Press

Dominant Social Theme: Some people are more equal than others, or more trustworthy.

Free-Market Analysis: It is our perspective that within the next few years, certainly inside a decade, it will be difficult to travel outside the United States or move money outside. This may go for other countries in the West, also.

We've written about this before but we try to return to the topic when warranted. And as can be seen from the above excerpt, once again, Homeland Security is at work expanding the US's fast-developing, two-tier travel system.

To put things in perspective, in order to receive the benefits of TSA Pre-Check, all human beings not related to the military and over the age of 12 must apply for a DHS "Trusted Traveler" program in order to be considered for Pre-Check eligibility. Why? Because obviously the military can be trusted and those of us who work in more pacifist professions just can't I suppose!

… TSA Deputy Administrator John W. Halinski, who is himself a 25-year Marine Corps veteran, made a statement that "TSA is grateful to the brave men and women in uniform who continue to serve our nation with honor and distinction. Providing TSA Pre?™ expedited screening while on travel is the least we can do for the members of our military."

I hate to break it to Mr. Halinski, but offering our troops an expedited security screening is not one of the least things we can do. It is downright foolish to assume that military service members are somehow an automatic "trusted traveler" as a result of their endeavors, and deserve to have the privilege of a somewhat more relaxed screening procedure to the detriment of the general population.

… This boneheaded mentality not only proves that many aspects of TSA screening protocol are just security theater, but this is a perfect example of government mafia police-state cronyism. The servants of the state and our destructive foreign policy shall be granted special privileges, while the civilian sheeple must endure the extra intrusion that only the almighty dollar (and obviously an NSA background check) can remedy.

Good article: But what it is not saying is worth noting, as well. That is, the military is part of an all-private army at this time in the US. While the Pentagon and the political structure generally pays homage to those who join the military as part of a "public service," the reality is that in many ways military personnel are paid private practitioners.

Giving military personnel, especially, additional perks tends to widen the gap between the professional soldier and the civilian he is sworn to protect. We've seen in the increasing police beatings of civilians how easy it is to create an "us versus them" paradigm in which those in uniform begin to develop a sense of superiority.

But there are also other issues concerning "trusted" traveling, which have to do with its continued expansion. Over two years ago, a Daily Bell story entitled, "Germany & US Integrate Air Travel Surveillance Programs," focused on the globalization of the program.

We quoted a DHS press release at the time:

"Integrating one of our biometric trusted traveler programs with Germany's will facilitate legitimate trade and travel between our two nations while allowing law enforcement to focus on the most serious security threats at points of entry to our country," said Deputy Secretary Lute.

"This is another good step forward of our government-to-government cooperation. The joint program will make transatlantic air travel easier and make it more secure at the same time," said State Secretary Fritsche. Under this statement, the United States and Germany will develop processes for qualified citizens of either country to apply for both the United States' Global Entry program and Germany's Automated and Biometrics-Supported Border Controls (ABG) program, which each use biometrics to identify trusted travelers.

So … On the one hand, trusted travelers will continue to receive more and more privileges. This will extend beyond US borders, as we can see from the agreement with Germany.

On the other hand, those not in the trusted traveler program will no doubt have to undergo further inconveniences and even more difficulty flying. This will also extend beyond the movement from a physical location to monetary transfers.

Already, the amount of money one can take on one's person is limited. But there are also reports that the Securities and Exchange Commission in particular is concerned about the outflow of cash from the US and that additional restrictions will be developed over time to retard cash outflows.

Capital controls and travel restrictions are typical of authoritarian societies … as is the glorification of the military and the bestowal of additional privileges on those who serve. These are not trends that bode well for American democratic exceptionalism nor for the West in general.

Those who understand will doubtless heed warning signs and take appropriate action.