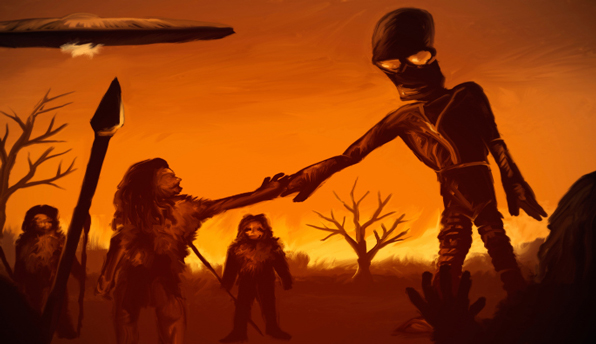 Michael Tellinger: Ubuntu Party Elections 2014 Philosophy and Plan of Action … A Blueprint For Human Prosperity, abolish the privately owned RESERVE BANK … Create a PEOPLE's BANK that creates money for the people by the people, tax-free and interest-free, debt slavery, Decentralize the government, escape the grips of Monsanto, Gift Economy, grow organic food … Michael Tellinger shares the philosophy of Ubuntu in this video, published on April 7, 2014, which any freedomloving people can certainly abide. – Forbidden Knowledge TV

Dominant Social Theme: We need a people's central bank. And make it an anti-usury one …

Free-Market Analysis: The analysis of elite dominant social themes is always difficult. It is like putting together pieces of a jigsaw puzzle. Only in retrospect does one often begin to see larger promotions at work.

Michael Tellinger and his new Ubuntu Party initiative may provide us an important bridge between one power elite promotion – the anti-usury "people's" central bank – and another one, the "ancient astronaut" theory of human origins.

Here's a brief bio of Tellinger:

Michael Tellinger is a South African author, songwriter and politician … Tellinger released his first SA record in 1981, HAZEL, nominated for the SARIE award in that year as best male vocalist. Later in 1981 Tellinger played the part of Joseph in the opening of the State Theatre in Pretoria. Michael Tellinger and Russell Stirling combined to become a successful rock duo during the early 80's before splitting up in 1985. In 2005 he published the book Slave Species of God based on the writings of Zecharia Sitchin, which propounded an ancient astronaut theory of human origins.

Obviously, Tellinger is an accomplished and successful man. He is also someone who has moved in the highest corporate circles. In 1997, for instance, Tellinger launched Nebula BOS Records, which reportedly brought on board over 400 artists within the first year. Later on, he was able to formalize a distribution deal with Warner Bros.

In 2000, he became host of a radio show on Cape Talk radio that "dealt with South African innovation, technology and success stories."

Despite having mainstream success, Tellinger was by then attracted to one of the more explosive historical exercises in history – the writings of Zecharia Sitchin who claimed to have translated Sumer clay tablets that told an astonishing story of the creation and enslavement of human beings some 400,000 years ago.

Anyone who studies what the Internet is revealing to us about ancient human cultures may certainly grant the theoretical possibility that there was an overarching and sophisticated culture 10,000 years ago … one that was wiped out by an ancient cataclysm.

Proponents of what we can call the ancient civilizations hypothesis often make the argument that pre-Dynastic Egypt (and presumably other linked civilizations) had an advanced civilization that included power-machine tools, advanced Tesla-like energy systems and even aural methodologies of levitation.

Tellinger probably believes in these concepts, but he apparently attributes such technologies to aliens. According to Wikipedia, "Tellinger published his first book Slave Species of God in 2005 … The work is the result of a 25-year study of the writings of Zecharia Sitchin … Tellinger also frequently publishes articles on the topic via his website."

But the main evidence for the ancient astronaut theory – or one version of it anyway – comes from Sitchin, and he apparently mistranslated some of the Sumer texts that support his thesis.

The globalist idea is that civilization started about 5,000 years ago, with Sumer, and human history has been basically an ascension ever since. This allows the establishment to argue that whatever unfolds in the near future is part and parcel of humanity's undeviating progress toward a continually more enlightened society – presumably one that is global in nature.

It is not clear why someone like Tellinger would be so attracted Sitchin – whose life labor is controversial at best – when the theory of ancient civilizations can explain an ever-expanding pool of cultural and technological anomalies in a fairly persuasive way.

Likewise, it is unclear why Tellinger would make as a central tenet of his new political party the idea of an anti-usury "people's" central bank.

Here's more about the party that Tellinger has created:

In his UBUNTU Party Press Release, published on March 18, 2014, Tellinger provided the outline for The UBUNTU Party's Platform, which will (miraculously) participate in the South African Elections on 7 May 2014 …

Based on these simple principles we plan to do the following.

2. Create a PEOPLE's BANK that creates money for the people by the people, tax-free and interest-free, with 100% employment, and stop the financial enslavement of our people by the privately owned RESERVE BANK.

3. Let our scientists and inventors deliver a renewable source of Free Energy for every South African.

4. Support our traditional healers and research scientists in finding alternative cures for all disease and prevent the drug cartels from hiding such cures from the people.

5. Support our farmers on every level to escape the grips of Monsanto to grow organic food and plant gardens across the nation to ensure that no South African ever goes hungry again.

6. Decentralise the government so that people can govern themselves in their own communities – taking care of their own needs immediately, supported by the new People's Bank every step of the way.

7. Restructure the judiciary and the legal system, to be written by the people for the people, unlike the unjust legal system we face in our courts today, which holds the rights of corporations above those of living breathing human beings. The path to economic freedom is an exciting new era in human history, which is linked to the age of information, where corrupt corporations can no longer hide their crimes against humanity from the people.

These seven points correspond – with one exception – to a broad cross-section of similarly expressed viewpoints within much of the alternative 'Net media. But what stands out, unfortunately, is the central plank of Tellinger's platform, which is built around the creation of a "people's" central bank.

Of course, having a central bank of any sort would over time invalidate the rest of Tellinger's platform. One cannot seek freedom and prosperity while at the same time enforcing monopoly money creation under the supervision of a handful of "people," no matter how well meaning.

Tellinger's stance also seems anti-usury. Thus, despite the fine words and considered alternative social structure, Tellinger's basic tenets apparently include money printing by a few and incarceration of the many who seek to lend money. Leviathan would still exist, as would its penal colonies.

What seems at first blush to be a Jeffersonian/republican approach to social change ends up being an authoritarian document that contains a monopoly of force at its dark center.

Tellinger may be riding a larger wave of alternative sociopolitical and economic programs spawned by what we call the Internet Reformation.

But it could also be that the power elite we regularly analyze is attempting to set up another countercultural movement, complete with legal marijuana and other attributes of 1960s activism.

When we looked into Margrit Kennedy's alternative LETS money movement, we were surprised to find that she was apparently a kind of Trojan horse for UN activism – having worked extensively with her husband on UNESCO projects.

Things are not always as they seem. Tellinger's fascination with ancient astronauts and his utilization of counter-cultural memes within the context of a profoundly authoritarian financial construct (monopoly central banking and the criminalization of interest) provides food for thought, to say the least.

Is it out of the realm of possibility to propose that a series of elite dominant social themes is being implemented with the intention of regaining control over a narrative that has been severely compromised by what we call the Internet Reformation?

Ellen Brown, who shares some of Tellinger's perspectives, is running for office; Bill Still attempted to run for president on the Libertarian ticket; and now Tellinger has set up an elaborate political structure in South Africa that includes, nonetheless, statist nostrums that would tend to invalidate an otherwise eloquent platform.

The anti-usury, pro-"people's" central bank crowd is deeply authoritarian – either coincidentally or not. "Ye shall know them by their fruits."