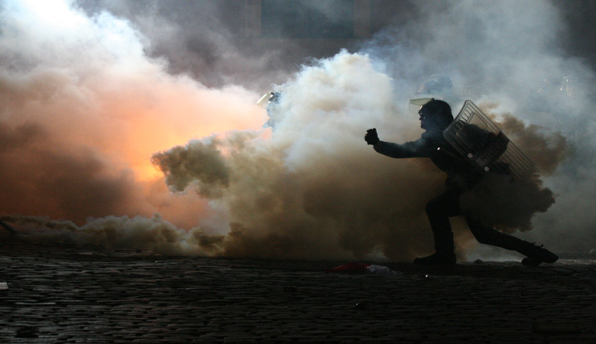 John Kerry: Russia has until Monday to reverse course in Ukraine … Secretary of State John Kerry warned of serious repercussions for Russia on Monday if last-ditch talks over the weekend to resolve the crisis in Ukraine failed to persuade Moscow to soften its stance. Kerry will travel to London for a Friday meeting with Russian Foreign Minister Sergey Lavrov ahead of a Sunday referendum vote in the Crimea region to secede from Ukraine and join the Russian Federation. U.S. and European officials argue that Moscow is orchestrating the referendum and waging an intimidation campaign with thousands of Russian troops controlling the region. – Washington Examiner

Dominant Social Theme: This is great. All eyes are on us – and the other important people in the world. Ain't war grand! Makes you forget about everything else …

Free-Market Analysis: The Great Game continues. We are supposed to be mesmerized, and to forget the problems of society and how the system contributes to them.

Instead, we are reminded of how Leviathan protects us and keeps us safe. As tensions rise, attention turns to "armed forces," security zones and the "projection" of military power.

Never mind this "crisis" is surely a ginned-up one. While it is true Ukraine has been ruled badly and corruptly, the ousting of the previous president after significant concessions tends to confirm the reality of shady Western Intel operations.

There is little reason to doubt these operations, if only because they have been taking place elsewhere for the past three years – in Northern Africa and the Middle East – as we've long covered.

But such geopolitical tensions, no matter how they are generated, provide politicians with the opportunity to preen and puff on the international stage.

John Kerry is good at this – and now he has begun issuing ultimatums that make the current "crisis" even more dramatic. Here's more from the article:

If Russian-backed lawmakers in Crimea go through with the Sunday referendum, Kerry said the U.S. and its European allies will not recognize it as legitimate under international law. The U.S. and Europe on Monday would then unite to impose sanctions on Russia, Kerry told a Senate Appropriations subcommittee Thursday during a hearing on the State Department's budget.

… "The hope is that reason will prevail but there is no guarantee of that." Sen. Lindsey Graham, a South Carolina Republican and a top critic of President Obama's foreign policy, asked what the administration would do if Russian forces advance farther into the eastern area of Ukraine, and the new government in Kiev asks the U.S. for weapons to fight.

Kerry responded carefully, saying "we have contingencies – we are talking through various options that may or may not be available." "Our hope is not to create hysteria or excessive concern about that at this point in time," he said. "Our hope is to avoid that, but there's no telling that we can."

U.S. authorities are closely monitoring the number of Russian troops in Crimea, as well as their movements, he said, noting that Moscow is allowed to have a total of 25,000 troops in Crimea. He said that currently Russia does not have the assets positioned to "march in and take over all of Ukraine but that could change and we recognize that."

"I've been impressed on how united our European allies are on this… to a person, to a country, they are very, very committed to make sure there is accountability," he said. Sen. Patrick Leahy, a Vermont Democrat who was chairing the hearing, asked how this showdown with Russia in Ukraine is impacting efforts to destroy Syria's chemical weapons stockpile.

It all sounds very grave and dramatic, though the possibility of World War III seems remote, to say the least. It could be that Russia reinforces its grip on Crimea … but Crimea was part of the USSR until it was given to Ukraine in the 1950s.

Certainly, there will be heightened military tensions and perhaps military actions as there were in Georgia, but the West didn't respond then because its provocations were both obvious and ill advised. The West and particularly the US would seem to have over-reached again.

There may indeed be sanctions implemented against Russia, but how severe can these be at a time when the West is struggling with a continuation of its Great Recession?

Russia is in a position to strike back with economic sanctions of its own, especially against Europe. In fact, such sanctions may peel the EU away from Britain and the US – as the EU will be bearing the brunt of any economic counterattack.

What current tensions mostly do is what they always do: give various participants and leaders the ability to further repress their own people. War is indeed the "health of the state," as the US in particular has proved during this long-running "war on terror."

In fact, it would seem that Vladimir Putin is using this latest crisis for similar purposes. Here, from AP:

Russia Bans Several Websites Critical of Gov't … Russia on Thursday banned several websites notable for their criticism of the government and a blog run by prominent opposition leader Alexei Navalny as the Kremlin intensified its crackdown on independent media amid tensions over Ukraine.

The government communications watchdog, Roskomnadzor, said Grani.ru, Kasparov.ru and Yezhednevny Zhurnal (Daily Journal) have carried incitements to unlawful behavior and participation in unauthorized mass gatherings. It said the ban was requested by the Prosecutor General's Office and Internet providers are now under instructions to implement the block.

Kasparov.ru was run by opposition figure and former chess champion Garry Kasparov. Along with two other websites, it carried scathing criticism of President Vladimir Putin's government, including its action in Ukraine, where Russian troops have taken control of the Crimean peninsula.

Now, it can be argued in some cases that the West has an undue influence over some Russian news organizations and blogs. But censorship and blatant information control is never a good thing. Russia is surely just as guilty of this as any other large power.

In any event, the current Crimean standoff will generate additional dreary headlines. We're already being exposed to a barrage of comparisons between the "leadership" of Barack Obama and Putin. Republicans find Obama "weak" while Democrats defend him as statesmanlike.

No doubt the leadership of both Russia and the US – and perhaps Europe, too – will use this latest to generate support for additional military expenditures at a time when budgets are generally squeezed. Perhaps Western Ukraine will end up in NATO as well, which is what the purpose of the initial provocation may have been, at least partially. Crimea is another story. Russia may end up with the winning hand there.

Meanwhile, the citizens of the various combatants will surely be the losers …