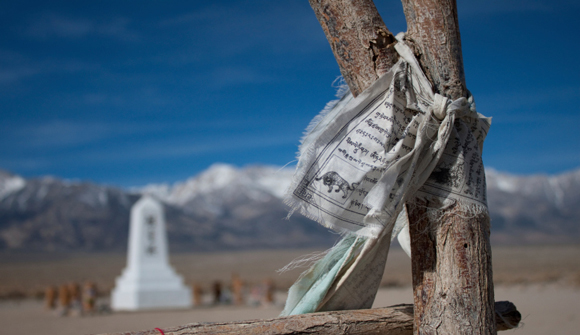 Retired general and former Democratic presidential candidate Wesley Clark on Friday called for World War II-style internment camps to be revived for "disloyal Americans." In an interview with MSNBC's Thomas Roberts in the wake of the mass shooting in Chatanooga, Tennessee, Clark said that during World War II, "if someone supported Nazi Germany at the expense of the United States, we didn't say that was freedom of speech, we put him in a camp, they were prisoners of war."

He called for a revival of internment camps to help combat Muslim extremism, saying, "If these people are radicalized and they don't support the United States and they are disloyal to the United States as a matter of principle, fine. It's their right and it's our right and obligation to segregate them from the normal community for the duration of the conflict."

Aside from the inherent problems in criminalizing people for their beliefs, Clark's proposal (which his MSNBC interlocutor did not challenge him on) also appears to be based on the concept of targeting people for government scrutiny who are not even "radicalized," but who the government decides may be subject to radicalization in the future. That radicalization itself is a highly amorphous and politically malleable concept only makes this proposal more troubling. – The Intercept/Unofficial Sources, July 20, 2015

Last week we featured a refreshingly candid retired U.S. general. Today we have another one, who is far too candid in the opposite direction. General Wesley Clark thinks the government should send "radicalized" Americans to internment camps.

We need not explain to Daily Bell readers the many reasons this is wrong. The story is significant for other reasons.

First, General Clark doesn't otherwise fit in the right wing, law-and-order camp. He made a brief presidential bid in 2004 on the Democratic side and was very critical of the Bush administration's anti-terror tactics and Middle East interventions. Yet now he wants to round up and imprison radical Muslims. This demonstrates that politicians across the spectrum threaten civil liberties. They differ only on the details.

Second, he floated his argument on the supposedly "progressive" MSNBC network. The interviewer didn't question the idea, either. Truly professional journalists are usually quick to notice threats to freedom of speech – or at least in the past. Not this time.

Third, General Clark seems genuinely committed to his idea. Far from backtracking, he doubled down in a subsequent Twitter post to say U.S. citizens who choose ISIS are spies or enemy combatants. He again called on government to "separate" such people from society based solely on their beliefs. Again, news media mostly ignored or failed to notice it.

If anyone is "radicalized" here, it is General Clark. He calls for a return to World War II-style internment of potentially disloyal Americans, as if that episode somehow proved the concept. In fact, the nation subsequently and correctly denounced that precedent.

A congressional commission formally condemned the World War II internments in 1983, saying it had no "military necessity." In 1988, Congress awarded reparations to surviving Japanese-American detainees. On December 7, 1991 – the 50th anniversary of the Pearl Harbor attack – President George H.W. Bush said the internments were "a great injustice and will never be repeated."

We must wonder how many other U.S. generals think like General Clark. We suspect his is not an isolated view.

Any such officers are spitting upon the very Constitution they claim to protect. They are the real radicals.