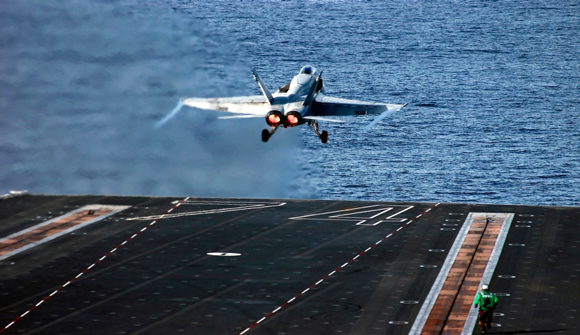 Six months after abandoning its humanitarian but underperforming slogan, "America's Navy. A global force for good," the U.S. Navy is making an $84 million bet on a new, presumably more muscular advertising agency.

The Pentagon recently announced that Young and Rubicam, a slick Manhattan marketing firm, has won the Navy's advertising contract for its recruitment effort for one year. Y&R rival Lowe Campbell Ewald had been exclusively retained by the Navy for 15 years until it was ousted.

Dan Flint, a marketing professor at the University of Tennessee told The Intercept that the feel-good message "did not motivate young men and women to act — and worse it demotivated those who served."

Why? "The campaign was too soft for a war fighting force," he said. "It might have played well to some outside audiences, namely some of our allies, but not recruits, service members or even our enemies." But it's "not quite the campaign that evokes confidence, power or fear," he said. – The Intercept, June 8, 2015

We saw the Navy's "Global Force for Good" commercials on TV a few months ago, and thought them strange at the time. The service it portrayed bore no resemblance to reality. Instead of carrier-launched fighter jets pursuing terrorists, it showed earnest youngsters delivering food to smiling villagers.

While the Navy's mission sometimes includes disaster relief and humanitarian operations, those are not its core purpose. It exists so the United States can control the seas by force, and therefore control much of the world.

The story quotes a marketing professor that the campaign "did not motivate young men and women to act." This seems odd. Other marketing experts tell us the Millennial Generation is highly altruistic and wants to make the world better. So why did they not respond to the campaign?

We suspect it is because Millennials are also highly cynical. Most know that the U.S. Navy is not "a global force for good," any more than Coca-Cola is "the real thing." They seek authenticity, not power.

Of course, the Navy doesn't need every millennial. Nor does it need a random sample of the generation. Along with the other services, it wants to attract recruits who will suffer hardship and accept risks for their country.

We touched on this last month in Paid-for Patriotism in the NFL. Military recruiting involves a great deal of deceptive marketing. Does the Navy need a different way to fool its prospects?

Actually, honesty may be the most effective strategy for them. The expert in today's story suggests a better campaign would evoke "confidence, power or fear."

Military service offers all those qualities to those who enlist. Instead of shrouding reality, maybe the Pentagon should show prospective recruits exactly what real war is like: the bodies, the smell, the fear and the glory.

Most people would reject such a message, but some would embrace it – and they are the military's best recruits.