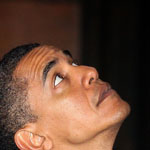 US newspaper owners, their advertising revenue evaporating, their circulation declining and their readership going online to get news for free, are fighting mad. The enemy? Websites that use their stories without paying for them. "We are mad as hell, and we are not going to take it any more," said the chairman of the Associated Press, a cooperative of over 1,400 US newspapers, borrowing a line from the anchorman character in the 1976 movie "Network." "We can no longer stand by and watch others walk off with our work under misguided legal theories," Dean Singleton said at a meeting this week of the Newspaper Association of America (NAA) in San Diego, California. Singleton's battle cry came just a few days after News Corp. chairman Rupert Murdoch (pictured above left) launched a broadside against Internet giant Google, whose Google News website is one of the most popular news aggregators on the Internet. "Should we be allowing Google to steal all our copyrights?" asked Murdoch, the owner of newspapers in Australia, Britain and the United States, where his holdings include The Wall Street Journal and New York Post. "Thanks, but no thanks," the News Corp. chairman said. – AFP

Free-Market Analysis: Now the 'Net bites hard. Newspapers have been dying since TV and radio were invented, but electronic communication is putting some really big nails in the coffin. Competition has been compounded by the financial crisis. And print publications are going out of business in droves. Even mainstream television is feeling the pinch.

The 20th century media model, built on information scarcity, is unsustainable. It is unsustainable not because people don't want to read or absorb information in other ways, but because the 20th century media-model has been supported for the last decade by a fiat money boom that papered over the real problems. Yes, unfortunately, mainstream media carries costs far in excess of what the product is currently worth.

The Daily Bell is an electronic newspaper that has been growing powerfully since it arrived on the scene, only recently. True, its writers, editors and technologists have over a century of experience between them, but the point is that the Internet allows for the creation of this sort of venue because an electronic presentation is a far more efficient delivery platform than paper and ink.

The Daily Bell, with an audience already the size of a small, mainstream "thought" magazine, runs with an overhead that is far less than print publications with similar distribution curves. What that means, bottom-line, is that Internet sites can attract thousands, and sometimes millions of readers without incurring mainstream-media sized expenses. The Drudge Report is a prime example of this. With perhaps 10 million regular readers, the Drudge report seems to be run by a handful of people. The Boston Globe, meanwhile, which distributes similar content, is bleeding to the tune of some $80 million a year – and doesn't reach nearly as many readers.

This is the real reason why the executives running the AP and its newspaper-customers are mad. They are frustrated and going broke. But these newspapers and wire services would be even worse off if news aggregators were driven out of business. Now it seems as if they are declaring war on their only dependable allies in this new frontier. Good luck.

The problem is so much deeper than aggregation. Scarcity made the product palatable. But it is less so every day. The major Western media regularly publishes and presents information that is misleading and filled with half-truths. Readers can find better and more reliable reporting on the ‘Net. And even when readers can't find more incisive reporting, they can discover other points of view, and juxtapose those against what they are used to ingesting. Good aggregators like Drudge are not merely presenting someone else's information. They are providing new points of view based on the information they choose to offer. You know, there is nothing to stop mainstream media from doing exactly the same thing, by the way. Why don't they? Think about it! What's holding them back?

The 20th century, with its vast printing plants and hordes of eager, naive reporters and eminent newscasters was an age of artificial information scarcity, for it cost billions to build a media empire comprised of TV, radio and print. The 21st century, with its citizen news reporters, incisive blogs and explosion of on-line media technology, is an era of information plenty. Mainstream media leaders are going to have to think of ways to compete – and litigation is the bluntest instrument, and ultimately an irrelevant one.

We've written before that the Internet is like the Gutenberg press that changed the face of European power and sparked the Reformation and ultimately the Enlightenment. We don't know where the Internet is taking us, but these kinds of information revolutions are difficult for the power elite to control, especially during their initial efflorescence (say the first 25-50 years). Anyway, it is way to late to control the dissemination of information via the ‘Net to this generation of Internet consumers. The proverbial genie is out of the bottle, whether it has to do with cultural, economic or even military issues and memes.

A whole generation (including older adults) has had its collective eyes opened – and they prefer the more honest cacophony of the ‘Net to what went before. If the mainstream media doesn't want to go out of business en masse (oops, they already are), they will have to start reporting more honestly and openly about what is really going on in the world. And they will have to cut costs a great deal, and probably lop off a bunch of irrelevant reporters as well. Then their businesses will be viable and people will read what they have to write on a regular basis. Say, that sounds like blogging.