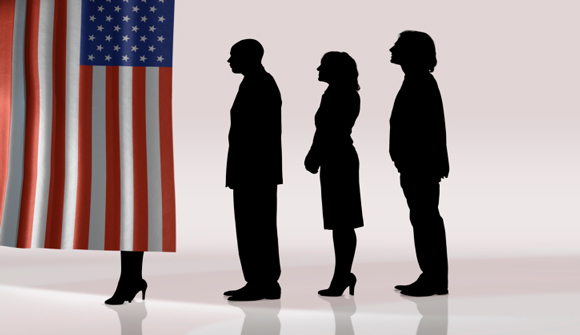 It has come to this: The GOP, formerly the party of Lincoln and ostensibly the party of liberty and limited government, is being defined by clamors for a mass roundup and deportation of millions of human beings. To will an end is to will the means for the end, so the Republican clamors are also for the requisite expansion of government's size and coercive powers.

Most of Donald Trump's normally loquacious rivals are swaggeringly eager to confront Vladimir Putin but are too invertebrate — Lindsey Graham is an honorable exception — to voice robust disgust with Trump and the spirit of, the police measures necessary for and the cruelties that would accompany his policy. The policy is: "They've got to go."

Trump evidently plans to deport almost 10 percent of California's workers and 13 percent of that state's K-12 students. He is, however, at his most Republican when he honors family values: He proposes to deport intact families, including children who are citizens. "We have to keep the families together," he says, "but they have to go." Trump would deport everyone, then "have an expedited way of getting them ["the good ones"; "when somebody is terrific"] back." Big Brother government will identify the "good" and "terrific" from among the wretched refuse of other teeming shores.

The immigration plan is certainly an easy target. What Trump proposes would wipe out huge swathes of the U.S. economy as construction projects, restaurant kitchens and lawn mowers across the nation sat idle. Worse, the brute force necessary to deport millions would remain as a police state apparatus for use against recalcitrant American citizens.

Set practicality aside for now. Having seen so many other "plans" fall by the wayside, Trump supporters clearly don't care about such details. They need a target for their anger and Trump is giving them one.

The Republican hierarchy is in a bind but has only itself to blame. Trump is correct when he calls the party's elders corrupt and ineffective. If Trump will be corrupt but effective, many voters would see him as an improvement.

This leads to a darker question. What, exactly, will Trump do so effectively? His immigration plan is a clue. He will usher in the largest expansion of government power since Franklin Roosevelt's New Deal. FDR seized on the Great Depression to justify massive change. Today's lesser depression would let Trump do the same.

Trump must first win the nomination and general election, of course, and he still faces long odds on both. If nothing else stops him, massive anti-Trump Hispanic turnout will surely end his crusade next November.

It will not end the anger, however. This election season will be an important test of the American political system. Can politicians continue to steer the electorate away from its own best interest? If not, what character will the new populism take?